Soooo Ready to Fall Into Winter by Alicia Dean

Yes, I love winter. I know, I know, people think I’m crazy, and perhaps they’re correct. (For many reasons, not just because I love winter :)) I love the cold and the snow. One of my favorite things is to be snowed in, as long as I have power, food, and wine (not necessarily in that order).

I don’t like it when my kids are out on the roads. I worry about them, and I don’t like it when people are harmed or lose power. However, sometimes, snow storms are unfairly given a bad rap. For example, this morning, I signed onto my computer (that’s the only way I get the news. I never watch it on tv or read a paper anymore) to see this headline:

As it turns out, this headline was a bit misleading. When I looked at the article, I discovered the death toll was 4. (That’s not so much of a climb as it is a tiny step). And, one died from an accident (accidents happen even in the best of weather). Three died from heart attacks while shoveling snow. Not to minimize the sadness of those deaths, but you ask me, to blame the ‘climbing death toll’ on the weather is stretching it just a little.

I live in Oklahoma, where we seldom get really ‘bad’ snowstorms, at least not more than one a season or so. Maybe I would change my mind if I lived in Buffalo, New York or Minnesota, Wisconsin, some of those places that really get hit with winter weather. Honestly, I don’t think I would. I really hate summer, hate sunlight and hot weather. I think I should have been a vampire.

Speaking of vampires, it’s kind of ironic that, as much as I love cold weather, when I finally wrote a vampire book, I set it on a tropical island. I was looking for a unique twist on the vampire stories, and I thought, vampires on a sunny, beautiful tropical island is definitely different.

Book 1 in my Isle of Fang Series, Liberty Awakened, is currently on sale for 99¢…(click on the cover to be taken to the Amazon page) 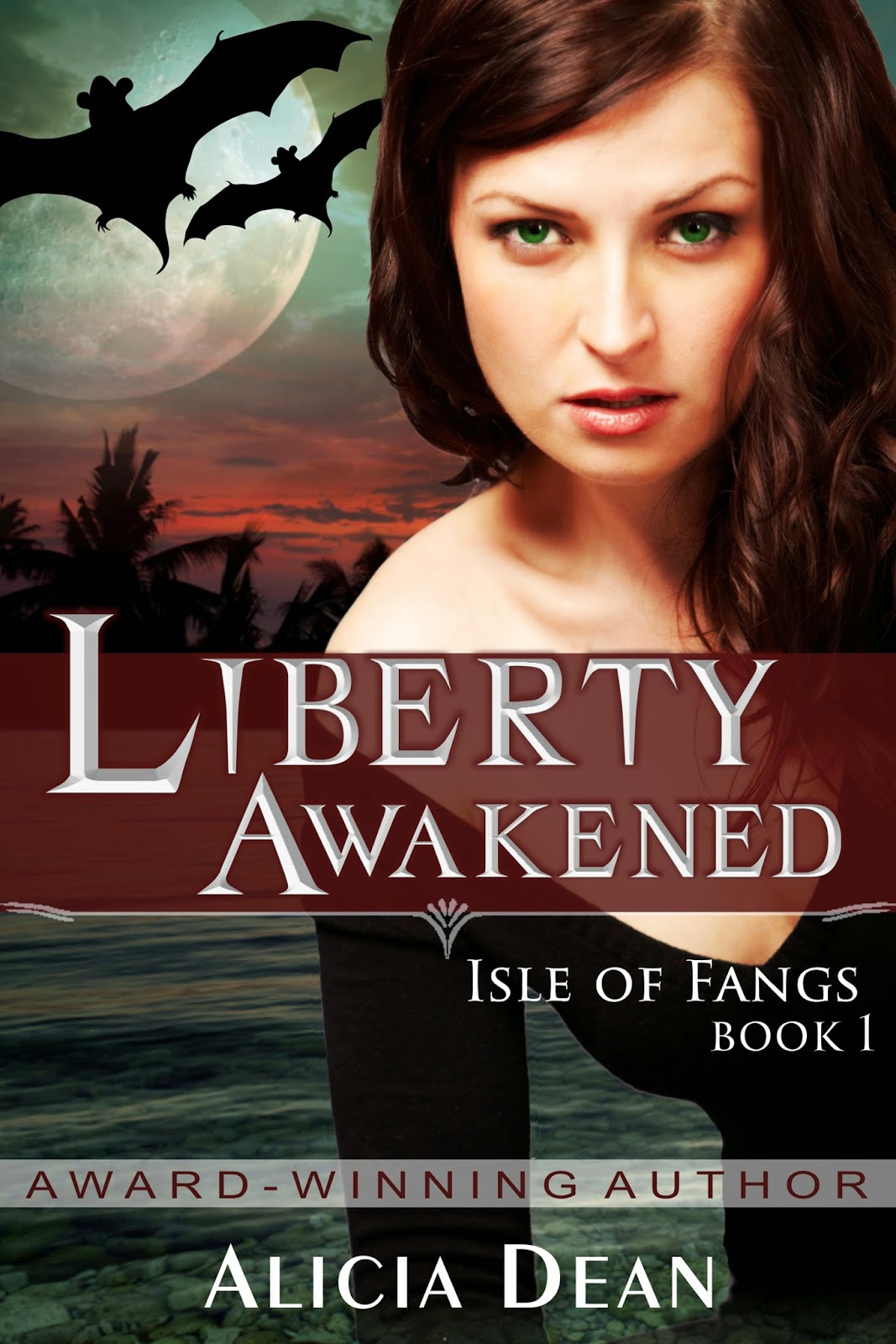 Liberty Delacort doesn't believe in Vampires. Then she meets the father she never knew, just before his death, and learns she's the last of the Van Helsing bloodline. Eli, a 300 year old Vampire, doesn't believe Liberty has what it takes to stand between the humans and the Evil Ones on Sang Croc Island, and orders her back to the mainland. Ryan, a friend of Liberty's late-father, disagrees and insists that Eli provide the promised training. Now the Full Moon has come and Liberty must stand in the gap. But unbeknownst to her--she's fallen for the wrong vampire. REVIEWS: "An adventure where vampires rule. Liberty is delightful [and] we get a hero and anti-hero. It's tough to choose between the two." ~ Reads and Reviews THE ISLE OF FANGS SERIES, in order
Liberty Awakened Liberty Divided

Liberty braced her hands on the door, intending to step back. Before she could, Eli lifted his head and whipped it toward her. He couldn’t have heard her, could he? She’d barely made a sound. Maybe he just sensed—

Her thoughts ceased when she took a closer look at Eli’s face. He stood in place, breathing heavily. She narrowed her eyes. God. No.  His features were somehow distorted, his skin had a gray cast and looked…crumpled. His eyes glowed red. Something dark and liquid—blood?—was smeared around his mouth, dripped off his…fangs?

“No!” She let out the cry before she could stop herself, then clamped a hand over her mouth.
Backing from the door, she shook her head violently from side to side. It couldn’t be. No way. She had to have imagined it.  A sound at the door told her Eli was coming out.

She turned and fled. Her tennis shoes slapped the ground, the noise reverberating in her ears along with the word—vampire…vampire…vampire. Oh my God. Vampire… Bats… Drained…
Posted by Alicia Dean at 9:17 AM

I was born and raised in Wisconsin, and believe me, your plan to avoid that state is wise. Being out in minus fifty degree wind chill, slogging through knee-deep snow was not fun. Although, I understand global warming has alleviated those conditions, somewhat. Still, I'll never move back! Enjoyed your post!

In Tahoe, we're supposed to have snow. We do snow dances and pray for the white stuff. The winter economy relies on snow--not to mention I want to get everyone out of the house and onto the slopes so I can get something done. After three drought years, WE NEED SNOW. So all you people swearing as you shovel, please send it our way!

Love your take on vampires, Ally. Maybe they could leave their island and move to the mountains for your next book!

Hi Ashantay, I would actually love to live in Wisconsin. Green Bay, to be precise. :) Thanks for stopping by!

Jannine, yes, you DO need snow! Maybe you'll get it this year. I'm with you, all those complainers can send snow my way, even though my personal economy actually suffers if I'm snowed in, since I miss work. :) Thanks...I like your idea. Hmmm....maybe they won't move, maybe they'll just travel to a colder climate in one of the sequels. :)

Again, here in Michigan, we are getting the snow you others want. Have to say I don't mind if I don't have to drive in it. You're right, Ally, being snowed in is the best. Even once when we lost power wasn't so bad. We got under blankets, burned candles, watched the snow fall. Vampires on a tropical island. Cool concept - no pun intended. ;-)

Ah, yeah, being without power for a little while is fine, but when stuff starts going bad in the fridge, and you can't watch tv or write, I'm not happy. :) LOL. Are you sure you didn't intend a pun??? ;)

Margo summed up my feelings on snow. The key to enjoying snow is not driving in it. Best to curl up with coffee and a good book (preferably one that takes place on a tropical island).

Haha, Diane. Sounds like a good plan to me. Thanks for stopping by!

The weatherman says we've gotten 16 inches of snow. I haven't left my house since Monday morning, and I'm not sure I want to head out tonight for orchestra rehearsal! As others mentioned, the best way to enjoy it is from the inside looking out! Best wishes on your new release, Alicia.

Love snow as long as it melts within 24 hours! Hawaii, here we come! Your vamp excerpt is intriguing,,,

Being a snowbird means spending winters inFlorida to avoid the snow. That's what I do. I enjoy watching it on TV and that is my limit. My kids refuse to take my calls when its snowing up North and I talk about the sunshine.

I love winters, too. Maybe that's because I live in Florida and it doesn't get that cold here, or stay cold for long. I still enjoy it, though. :)Liberty Awakened sounds exciting!

Wow - you've written a book that may well turn me into a vampire book reader!I was really hooked by the blurb and the excerpt, and now I have to read the rest! I haven't read vampire books since Anne Rice's interview with A Vampire,so there you.
Funny - I am no fan of winter but I love a good winter storm, even when it means firing up the generator. The total shut down of a storm is like a quiet time out.
Oh, and I whine that summer is too hot, too humid, and I burn easily. I'm the lobster pink and peeling one amongst all those lovely tanned people...and I live in Ontario. Go figure.

Patricia, I'm very jealous! I love not leaving my house. :) Hope you're getting a lot of writing done.

Susan, I don't like it when the snow starts melting, although I will say, Hawaii sounds like an amazing place, even without snow. :) I love rain too, and I hear there are rainy regions of Hawaii...that's where I want to go. Aww, thanks. Glad you were intrigued. :)

Haha, Barbara. I love Florida, but I wouldn't want to stay there so long I missed ALL the snow. :)

Another Floridian, huh, Chris? :) Thanks so much...I tried to make it exciting.

THANK YOU, Glenys. I'm flattered. I hope, if you read it, you enjoy. Yes, I agree about a winter storm being a quite time out. UGH...summer, yuck. :)

You definitely wouldn't like SoCal where I live if you don't like sunshine. We barely have a winter by anyone's definition. But I enjoyed the snow for the three yrs we lived in VA, so I know what you mean.

Right, Marissa. I like visiting California, but I would not want to live there. TOO much sunshine! :) Thanks for stopping by.

I read enough Laura Ingalls Wilder stories of the prairie as a kid to NEVER want to face a winter like that. I enjoy looking at pretty snow pictures, but once you've been digging out of three-plus feet of snow and ice, it loses whatever sense of magic it had (at least for me). I'm glad you enjoy the white 'stuff' though, Alicia! :-)

Forgot to mention, I loved the Isle of the Fang series!

Uh, yeah, those books didn't paint a very pretty picture of harsh winters. :) I love the white stuff! Aww, thanks. I'm so pleased you love the series. Working on book 3 now. It's a bit of a challenge, for some reason.

Hot vampires in the tropics...makes perfect sense to me. So, I live in CA after 33 years living/working in the Seattle area. I DO NOT MISS RAIN OR SNOW OR GRAY WEATHER. In fact, we had a sprinkle of rain today and I opted out of playing golf...I do not play in rain anymore. That's my rule. I know, what a baby I am. But I'll get lots done and I'll be in a good mood as I do it, while others slog around the golf course in wet conditions. Love choices! Yup, snow is pretty, new-fallen, but I don't miss it a bit.

:) Haha, yes, I guess it does. I would LOVE to live in Seattle. Rainy gray weather is awesome. I will have to say, though, it's a bit of a detriment to the game of golf at times. :) I haven't played golf in years...I miss it! I'm sure you get plenty of playing time in Sunny California.