We had a small sailboat for three years. While we did have our super awesome perfect days out on the Atlantic, we also had some hardships. The very first day we went out, the engine malfunctioned as we were motoring away from the marina and I found myself at the helm—sailing—before I was quite ready to be in that position. The Husband was below deck, trying to change the impellor and hollering up commands to me.

Not me. Not me who can’t even swim.

Talk about white-knuckled grip on the wheel and praying to Poseidon to go easy on us. I did the best I could and yes, there were some choice words flying about like hungry seagulls. I tried my best to NOT imagine myself being flung overboard and heading straight for Davy Jones’s Locker.

I did the only thing that made sense. I let the author take over. I was not a frightened suburbanite with absolutely no experience navigating a ship over the waves. Instead I was a fearless young woman in the 1500s during the Age of Exploration. I’d heard tale of the New World and was headed there to start truly living my life. I was leaving the ties of land behind me, braving the unknown waters between England and the distant shores of the Americas, and not looking back.

As I kept the vessel tuned to the wind, my young adult novel, Sail With Me, was born. I turned my experiences into fiction and added a boatload of adventure. The Age of Exploration is truly a fascinating time in our world history, particularly the encounters between the Europeans and the natives of the lands they explored. In Sail With Me, I made up a fictional empire, the Sunal, based on the Aztecs. 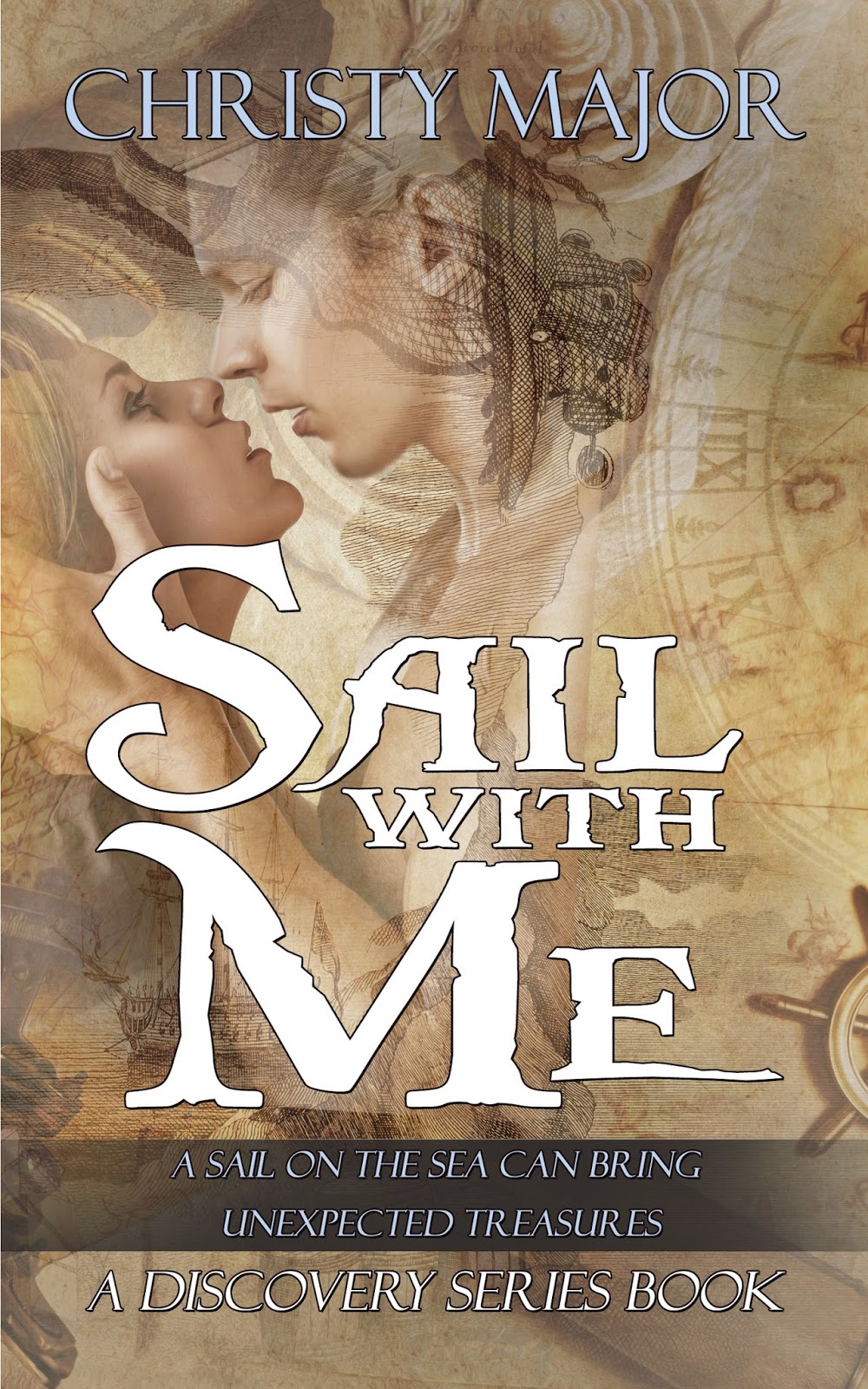 Here’s the back cover blurb:

What would you do for an adventure?

Left back home in Southampton, England while her father and brothers explore the high seas, Charlotte Denham works as a maid and spends most of her days dreaming of sailing. She wants to explore the New World. She wants to be noticed. Tired of her family’s absence and being denied work on a ship because she’s a girl, Charlotte takes matters into her own hands.

Charlotte expects to make her dreams come true. What she isn't expecting is Daniel Connor, fellow crew member aboard the Rose or Tizoc Metztli, exotic warrior of the Sunal Empire. Both have her feeling things she’s never felt before. Both notice her. Both need her.

The following excerpt is just after Charlotte gets her bests friend, Benjamin, to cut her hair and help her look like a boy to gain passage on a ship bound for the Americas:

I fell asleep at my house that evening and when I awoke in the morning, I slipped into my disguise, tied the shell necklace around my neck, and wasted no time getting to the Rose. I could not believe the sheer size of the vessel. Wide planks of dark wood covered her hull. Four thick masts, stripped of their sails at the moment, jutted out from the deck. The ship herself resembled a fly caught in a spider web. Braided lines extended from the perimeter of the ship and were secured into the sand by large wooden stakes. An enormous, rusted iron anchor was lodged in the sand beside the vessel.
After checking myself over, I jogged down the dock until I reached its end. I jumped into the sand and walked toward the ship. Before I reached the vessel, a man approached me. His shirt had been stripped away, and he had a white-knuckled grip on a mallet in his right hand. He swatted at a mosquito hovering around his sweat-laden head.
“What do you want, boy?” Two brown eyes narrowed at me.
“Hello, sir.” I bowed my head. “Are you Captain Finley?”
“I am.”
“I was asking around the docks if any captains sought extra hands before they sail out. Someone said Captain Finley was and his ship was careened on the south shore.” I pointed to the ship behind him.
Captain Finley studied me as a fresh sweat broke out all over my skin. Why did he have to look so closely at me? It didn’t matter if he recognized me as Charlotte Denham. If he suspected I was a girl—any girl—I was out.
“What skills do you have, son?”
“Clean, cook, fish, trim, and repair sails. I’m a hard worker, and I know how to take orders, sir.” Was I trying too hard? Had I said too much? I glanced up to Captain Finley’s face once then returned my gaze to the ground between us.
“You sound like a real catch with all those skills, if you indeed have them.” He grabbed my chin in his rough hand, angling it to get a better look at me. His calloused thumb pressed into the bruise on my jaw, and I swallowed the pain. “What happened to your face there?”
“Accident, Captain. Somebody bumped into me.”
He pursed his lips. “You’re not the fighting type, are you?”
“No, sir.”
“Good. Don’t need any hotheads on my crew.” He grabbed my shoulder and gave me a good jostling. “Only one final question then.”
“Aye, sir?” So close.
“What do you do if a man goes overboard?”
Was this one of the trick questions Edward Scarsdale had mentioned outside The Copper Pot? Did Captain Finley want a serious answer or was this a test?
I cleared my throat and said, “If he’s too foolish not to sure his footing, then he’s extra weight we didn’t need.”
Captain Finley barked out a laugh and slapped a hand down onto my shoulder. I swear I sank at least to my ankle into the sand.
“You’ll do, son. That’s my ship yonder, the Rose.” He gestured toward the careened vessel. “What’s your name?”
“Charlie, sir. Charlie Hamden.” Did he notice the waver in my voice?
“Well, Charlie Hamden, it’s good to meet you.” He extended a filthy hand to me.
I took his massive hand in mine and shook it. He held onto it for longer than I expected, and the quaking in my stomach nearly had me running away.
“We’re headed to the Americas, and I am looking for more hands. How old are you?”
“Sixteen.” The truth would be easiest to remember later on.
“Where are your parents?”
“Dead, sir.” The one who had noticed my existence anyway.
“I see. You healthy?”
“Yes, sir. Never get sick.”
No lie there. When I was about seven years old, my entire family except me had gotten ill with the fever. When they had recovered, my mother kept hovering about me, waiting for me to fall ill.
“You are a mystery,” my mother said. “Someone’s looking out for you, Charlotte.” Cripes, I hoped that was true.
“Never get sick, huh?” Captain Finley said, bringing me back to the present moment.
I shook my head, afraid to talk more than I had to.
“Well, then, I cannot pass on a deckhand who promises he never gets sick, now can I?” He smiled, but his eyes still studied me, sized me up. “See that trail of crew filling buckets with water and passing them back to the ship?”
“Yes, sir.”
“You think you’re smart enough to handle something like that?”
“Yes, Captain,” I shouted, nearly hugging the man, which was what a girl would do, so I stopped myself. I walked toward the line of crew.
“Wait a minute,” Captain Finley said.
My heart almost stopped beating. He had figured me out. He smelled a girl. Another chance lost.
“Aren’t you curious about wages, son?”
Wages? I hadn’t been thinking about getting paid to sail. I’d have done it for free.
“I trust your wages are fair.”
Captain Finley laughed again. “Well, then, the Americas are waiting for us, boy. We set sail at the end of the week if you can last that long. We’ve set up camp on the other side of the Rose there while the ship’s on her side. A few more tasks to be done, and we are off to cross the mighty Atlantic.”
He opened his hands to the ocean lapping at the sandy shore. A genuine smile stretched across his face as he breathed in a lungful of sea air. He shook his head as if looking at the sea had overwhelmed him.
I knew the feeling.

Set sail with Charlotte and let me know how you like sailing. Download Sail With Me and begin your adventure.

Like you we boated for a time. Had some white knuckle experiences of my own. Glad you got some real use out of yours. Best of luck here.

Your Charlotte and my Megan would have gotten along just peachy, both pretending to be boys on a ship! An awesome excerpt.

I've only been on boats a few times, but it sounds like sailing would be awesome. Your book sounds great too. Best of luck!