The MOST Romantic scene from Harvest of Dreams by Alison Henderson

I love first kisses, don't you? The power, the excitement, the overwhelming newness of the experience.  I also think one of the sexiest attributes a hero can have--better than bedroom eyes or washboard abs--is iron-clad self control.  There's no better test of the strength of a man's character than his willingness to deny himself for the sake of someone he cares about. 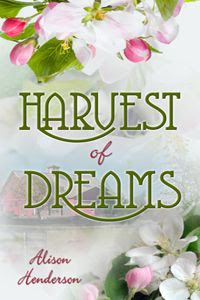 In the excerpt below, from my western historical, Harvest of Dreams, lawman Jared and young widow Lisa share their first kiss after staying up all night to care for her sick baby:

She heard the bed ropes creak and sensed Jared’s presence behind her, but she didn’t turn. His arms came around her from behind and crossed loosely against her ribs, cradling her in an undemanding embrace. She went still for a moment, then relaxed against him, and his arms tightened to hold her there.
“He’s better,” he said in a low voice over the top of her head.
“Yes.” She turned in his arms and leaned back to look up into his face. “He’s better, because of you. Thank you.”
“You don’t have to thank me.” He stroked her cheek with rough fingers, continuing to hold her close with the other hand. “I care about him, too.”
“I know.”
For a long moment, they gazed into each other’s eyes.
“Lisa.” The word was so low and deep it sounded more like a rumble in his chest than her name. “There’s something I want, badly.”
Her eyes asked the question, but she already sensed the answer.
“I want to kiss you. I’ve wanted to all day...for weeks really. Please don’t pull away.”
The plea in his voice tore at her. That a man like Jared, who could take whatever he wanted, was asking for permission touched her. He was giving her the power to grant or refuse. He would never force her. But she couldn’t deny his need. It mirrored
her own. She couldn’t help herself; she nodded without looking away.
Fierce satisfaction swept across his face before he lowered his mouth to hers. His lips were firm and deliberate as he worked to coax a response from her.
Lisa moved her mouth, but she wasn’t sure exactly what she was supposed to do. Before he’d left for war, Dan’s kisses had been the tentative caresses of
a teenage boy. This was completely different. Jared was a man, and beyond her experience.
“Open for me. Please.” He nudged at her lips to show her what he wanted.
She was dizzy with the new sensations and did what he asked without hesitation. Immediately, his grip tightened and one hand slid up her back and buried itself in her unbound hair. He used that hand to hold her head steady as he slid his tongue into her
mouth.
The action shocked her, and she started to draw back, but his hand tightened.
“No,” he murmured raggedly.
She was overcome by a longing to give this man what he needed. She stopped struggling and forced herself to relax in his embrace. Soon the novelty of the kiss wore off, and a fire began to burn deep inside her. She discovered her arms had wound
themselves around his broad, bare back and her hands were every bit as busy as his. Her tongue refused to remain passive and wove itself around his in an ancient mating dance.
Jared made a low noise deep in his throat and slid his right hand slowly down her back. Then, as if he could stand it no longer, he pulled her hard against him. A breathless excitement gripped her. The sensations were so thrilling and so new she lost herself in the pleasure of it. Finally, he dragged his mouth away. She collapsed
against his chest, and they stood, holding each other until their heartbeats slowed and their breathing returned to normal.
Jared was the first to speak. “I’m not sorry.”
She remained silent.
“This doesn’t change anything,” he said.
Lisa pulled back and looked up, shaking her head. “It changes everything.”
“No, it doesn’t. The feelings were there before, and they’ll still be there whether we act on them or not.”
She didn’t try to deny it. “But we can’t, and it will be so much harder now.”
“That’s true. Now you know how much I want you, and I know you want me, too. I don’t know where this is going, but we have to find out.”
“I don’t want to find out.” But a small voice inside denied the words. Part of her had to know.
“I think you do, and I know I do. I’m not going to offer to leave, even though it might make some things easier, not unless you can convince me you really want me to go.” He cupped her face in both hands and searched her eyes. “Do you?”
Lisa knew she should say yes and remove the unbearable temptation of his presence, but she couldn’t bring herself to speak the lie. She shook her
head. “No.”
Jared’s lips moved in a tiny smile, then his serious expression returned. “I can’t tell you I’ll never kiss you again, or touch you, or that I won’t want to get even closer to you, but I promise I won’t press you for anything you don’t want to give. I’d never do anything to hurt you. You know that, don’t you?”
She nodded.
“Good. Now it’s time for you to get some sleep.”
He led her to the bed and tucked her in, his hands lingering as he smoothed the quilt across her. Then he leaned over her, his expression rigid and deadly serious. “I want you to know leaving you tonight is the hardest thing I’ve ever had to do. But I want
more from you than one night in your bed.”
He closed the remaining gap between them and captured Lisa’s lips in a kiss filled with frustrated desire and a promise of things to come.
Then he was gone.

What do you think? Romantic, huh?
Alison
www.alisonhenderson.com

Romantic? Yes. Very well done. I liked seeing this from her point of view. Very powerful.

Thanks, Margo. Harvest of Dreams was my first book, and these two characters are very close to my heart.

A truly touching scene. I read this so long ago I forgot how great it was! LOL Thanks for sharing.

Jannine,
Glad you enjoyed it. I enjoyed revisiting it, too!

It's both tender and romantic. Excellent.
Love this line:

His arms came around her from behind and crossed loosely against her ribs, cradling her in an undemanding embrace.

Sometimes those opportunities to just BE STILL together are just as romantic for me as the hot passion scenes. Well done.

Robena,
Thank you. I love that line, too. I wanted to capture their exhaustion after being up all night with the sick baby, yet their growing awareness of each other.

Thank you, Barbara. Those quiet moments add a touch of realism to the romance. As you said, love is more than nonstop hot passion.

What a beautiful scene! Thank you for sharing, Alison!