The Most Psychotic Moment in FIREFLY MOUNTAIN 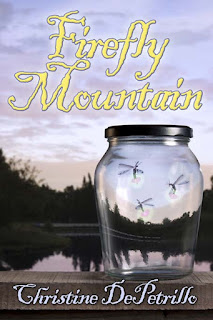 In FIREFLY MOUNTAIN, an arsonist plays a role in heating up the small town of Burnam, Vermont for main characters Patrick and Gini.
Excerpt:
No better color in the world. Inferno orange. Vibrant and alive. She loved the flecks of yellow and red that chased each other through the blaze. Reaching higher, gaining strength, throwing a scorching heat that melted everything in its path.
Such power, such divine power. It filled her. Scared away the dark shadows threatening to swallow her at every turn. Nothing could touch her when a fire burned. It surrounded her, protected her, made her feel real. She was a candle, and without the flame, she was useless.
This particular fire flickered in time with her pulse. The smoky scent of old wood caressed her nose. Made her think of all those campfires she didn’t enjoy as a child. Those campfires where her father told her she was a no good mistake. Told her the world wouldn’t ever accept her. Never understand her.
He’d been right, but she was changing that. The fire made it possible. If she could cause such destruction, the world would have to notice. Have to deal with her. Have to try to stop her.
As if they could.

The warmth from this blaze reddened her cheeks. Couldn’t get too close. Close was dangerous. Windows smashed with the pressure. Glass sprayed, a million heated shards catapulting into the cosmos. Walls crumbled. Family photographs curled and turned to ash. They’d rebuild, but that wouldn’t stop the next fire from being born. Wouldn’t stop the reverence they’d now have toward the strongest of the elements.

Fire was king and she its loyal subject.
ABOUT FIREFLY MOUNTAIN:
Firefighter Patrick Barre is determined to hide away in the woods of Vermont. He's content to do his job, remodel his house, and enjoy the company of his arson-detection dog, Midas. Scars from the fire that destroyed his family keep him from letting anyone into his life.
Gini Claremont uses her camera to celebrate the beauty of life. Nature soothes her, while anger is dangerous for Gini--and anyone near her. If she doesn't guard her emotions, her surroundings could go up in flames. Living alone, keeping busy, and letting her family keep watch on her is best for everyone.
When an arsonist declares war on their town, Patrick and Gini reluctantly band together to sift through the ashes, each holding a secret close to the heart. As the arson escalates, so does their mutual attraction.
Will teaming up put out the fires, or start a whole new one?﻿


Matches and candles,
Chris
www.christinedepetrillo.weebly.com
Posted by Christine DePetrillo at 12:00 AM

Verrrry interesting. A female fire bug. You really sucked us into her mood.

What's even scarier is that my editor didn't suggest a single edit for all the arsonist scenes. I guess I nailed writing like a psycho. Not sure if that is good or not. LOL.