﻿
Courtly love, or as the French say “amour courtois,” is a recurring theme throughout romance novels whether the stories are set in history, contemporary times, the future, or based in fantasy. Most readers have a sense of what courtly love is but few know the concept initiated from a man’s desire to love an unattainable woman. It doesn’t seem very gratifying and apparently it wasn’t to many writers who over the course of time made the woman more attainable to the man by employing the right method to win a woman’s heart, the proverbial key to open the lock on the woman’s chastity belt.


Courtly love has its roots in the Middle Ages. It was the term given to what a knight or a courtier felt for a noblewoman at the royal court whom they devoted themselves to on a metaphysical level. Though typically these women were above their admirer’s station and married so they couldn’t reciprocate the show of affection and instead had to feign their indifference. The most well-known example of this type of courtly love is the affair between Sir Lancelot and Guinevere, the trusted knight of King Arthur in Camelot and the wife of King Arthur.


Courtly love morphed from Lancelot showering his affection directly on Guinevere to Sir Robin Hood courting Maid Marion through acts of bravery and kind deeds directed towards the weak and downtrodden in England’s Sherwood Forest. The tales of Robin Hood show a shift in audience’s preferences in what depicts courtly love. It was the time of King Richard the Lionhearted and male figures in stories were subjected to a battery of tests to prove their ardor and commitment to the woman they desired. The ideals of chivalry such as loyalty, generosity, and protecting women and children were upheld as the precepts of courtly love.


Some four hundred years later during the Elizabethan Age, courtly love once again shifted having a more poetic interpretation exemplified in Shakespeare’s Romeo and Juliet as Romeo serenades Juliet to win her love. By the early 1800’s, the Brothers Grimm gave courtly love a very heroic tint in The Sleeping Beauty as Prince Phillip had to battle the witch Maleficent to save the life of his love Princess Aurora. Gone with the Wind’s Rhett Butler is the antithesis of Romeo and Prince Phillip as he was not one to serenade the woman he desired nor would he ever storm a castle to save her. Nonetheless, he courts Scarlet O’Hara but through patience and biding his time before appealing to her ambition for material possessions.


Today’s images of courtly love vary based on a combination of these five samples. Present day romance authors apply the traits of heroic action, chivalry, open affection, patience, and serenading the lady to demonstrate courtly love. They are the keys to unlocking the bolt around a woman’s heart, and the magnet which draws readers into this other world. 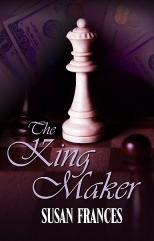 The King Maker is a modern romance partly set in England and partly taking place in New England. When American pilot Steve McKenna is murdered, he takes with him secrets about an international crime ring. Secrets that he only reveals to his friend Cullen Danes, an investigator for the British Aviation Ministry. Cullen is determined to find his friend's killer, but his life is put in danger when the crime ring's operatives learn he knows secrets that can expose them. When he meets Nina Holt, a hostess at the International Aviation Convention, Cullen finds he has to depend on her to save his life in more ways than one. Together, they uncover a labyrinth of illicit activities that involves government officials, financial institutions and global industrialists. Though the dangerous circumstances test their mettle, Nina and Cullen's true test comes when he asks her to take a big leap of faith. Torn between jumping into the unknown or remaining in a static position, Nina has to decide whether to take the biggest risk of her life that is if the King Maker does not have them killed.

You hit the nail on the head. However, add the Alpha male who is too arrogant to court his lady - at first. Then she gets to him and he must surrender his very soul. Doesn't work to well with a historical, but a lot of contemps use this technique.

Never thought of contemporary books from a courtly love perspective, but you're right. In my suspense books, the hero always has to overcome the bad guy before he can win the heroine's love. Great post and thanks for visiting us today.

Susan, great post. And I was so happy to see you on our blog. I read your book way back when. Great read.