Come on, admit it. When a book delivers an entertaining conflict, you gleefully devour the ending pages to discover how it’s resolved. I know I do and when the resolution involves an alpha male hero turning the tables on his heroine… oh, yeah. I’m in reader heaven.

Here’s a little slice of heaven from my lighthearted contemporary, That Dating Thing.

Despite the flashing cameras, Coop’s grin was genuine. Damn, she was something else. She would make the perfect district attorney’s wife. As he’d listened to her, working the press with her typical mix of sarcasm and wit, disbelief warred with respect. Underlying both was relief she hadn’t skipped town after all, along with an urgent need to hustle her away, sit her down and coach her through the minefield of media interest—after he kissed her senseless.


Though she’d been holding her own with the others, handling their questions with exactly the right lack of concern, she’d made an enemy of Wallis. Coop knew from experience, the network hopeful didn’t take kindly to being made the fool. And Rylee managed the feat while the competitor’s cameras were rolling. Wallis wouldn’t let the hit to his colossal ego go unanswered.


Because of Coop’s clumsy handling of Tim’s report, the press, led by Wallis, was in full-out attack mode, with both Rylee and he caught in the crosshairs. It would take some fancy footwork to turn the attention to their advantage. Professionally, he’d done what he could to minimize the fallout, officially submitting Tim’s investigation to District Attorney Burns. Personally, he still had his work cut out for him. Sizing up the situation, he saw an opportunity to repair the damage with Rylee, while serving up a twist to the story the press wouldn’t be able to resist. All he needed was a little bit of luck. 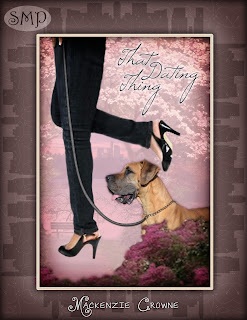 “Now, baby,” he crooned. “These people don’t know your sense of humor the way I do. They’re going to think you don’t like me.”


To his utter surprise, he witnessed the rare sight of a speechless Rylee Pierce. Her mouth gaped open, but no sound emerged. His grin widened as he enjoyed the novelty of an experience he wasn’t bound to face again anytime soon.


Draping an arm across her shoulders, he addressed the press. “I see you’ve met my fiancée.”


All eyes flicked to Rylee, who stilled after her attempt to dislodge his arm had failed.


“I’m not… He’s not…” She clenched her jaw and gritted her response to their avid audience. “We are not engaged!”


“She’s stubborn,” he said, winking at Melody. “She won’t say yes until she sees the ring.”


“I haven’t said yes because I was never asked a question,” Rylee growled. “He’s an idiot,” she told the crowd, turning to glare up at him. “You’re an idiot.”

So, what do you think? Will there be wedding bells for Rylee and her charming idiot?

I love making new friends. Stop in and say hi at my home on the web: mackenziecrowne.com


That Dating Thing is available in digital format and print at Still Moments Publishing, Amazon, and Createspace.
Posted by Laura Breck at 12:00 AM

I love a heroine who isn't afraid to call a man an idiot. We all know they have idiot tendencies! Thanks for visiting the Roses today, Mac.

Interesting stuff. Can't blame a guy for trying. Bless his pointy little head! Nice to have you here today.

Thanks for having me, ladies.

I do love when strong willed characters clash, Jannine. The possibilities are delicious.

I hope readers think so, Brenda. It was a blast to write.

I love Coop and Rylee. This is one of my favorite books and I refuse to send it to the archives on my Kindle because I know I'll want to read it again, and now that I've ready your excerpt, it might be sooner than I thought. Kudos, Mackenzie!

Welcome to the Roses, Mac- and thank you for your cool excerpt - another for my TBR pile!

Why thank you, Dixie. Coop and Rylee are two of my favorites, oh, and Pippin too. ;-) And they're on your re-read list. How cool is that?

Thanks, Glenys. The content on the Roses of Prose is consistently top notch. It's a thrill being here.