Combining my background in horticulture ... and murder? 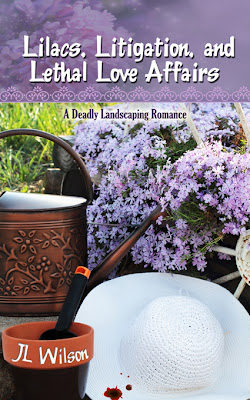 Here's an excerpt from Lilacs, Litigation, and Lethal Love Affairs, the first book in the Deadly Landscaping series in which Cassie Whittington, a 50-something ex-IT professional, is finishing a college degree in horticulture when her life takes a couple of unexpected turns ...

I went to the old greenhouse and pushed open the door, drinking in the humid smells of dirt, plants and the sharp tang of fertilizer. The odors were a balm to my winter-weary senses. March in Minnesota is a month of tantalizing hope and we still had half-a-foot of snow on the ground. This greenhouse was an oasis in the desert.

I walked along the narrow entry aisle, paved with flat stones that lay unevenly on the gravel floor. This walkway led into the greenhouse proper, the three-tiered tables on either side loaded with ficus, spider plants, dumb canes, bromeliads and ivy. The plants effectively blocked my view of all but the intersection ahead and the bright afternoon sunlight over me.

I reached the intersection for the main aisle and looked to my right. Four three-tiered benches lined either side of the aisle, each loaded with assorted plants. The Boston ferns were kept in the center of the greenhouse, where the humidity was less variable in the leaky structure. I turned to walk to my left, into the main part of the greenhouse and as I did, I almost fell over a body.

Michael Peavey was stretched out on the floor, overturned plants, dirt, and pots scattered over and around him. My first thought was that he’d fallen. Then I got a closer look at his face. I’ve never seen anyone with cyanosis before, but I recognized the symptoms. They were drilled into those of us who took Nursery Operations 101. Michael Peavey had all the signs of a man with pesticide poisoning — fixed and rigid limbs, a blue tinge to his face, bulging eyes, and protruding tongue.

I froze for one long, awful second. Then I realized whatever poisoned him could still be in the air if it had been released as a vapor. I turned to flee and that’s when I saw the thin trail of blood, bright red against the white of a broken ceramic pot on the floor. I hesitated—was he just injured or was he dead?

I hazarded another look at his face and what I saw convinced me to get the hell out while I could. I dropped the ferns in a crashing explosion of busted pots and dirt then dashed out of the greenhouse, almost overturning a bromeliad on the way. I burst into the hallway then into the potting room, barreling into Ed Jenkins, who chatted with a group of students near the door. I grabbed his arm, almost spilling his ever-present coffee cup from his hand.

He took one look at my panicked face and set the mug down on a nearby table. “Is there a problem?”

An important dignitary and the chief donor to the school dead of pesticide poisoning in the Horticulture Department greenhouse? A problem?

That was the understatement of the year.

Your style is so understated, kind of like your last line. I love it!

I agree with Jannine. Not a lot of shock and gore in this excerpt, but man did you draw me in!