Guest Christina James - Just Do It!

Don’t stop to think about it…just do it


I’ve been a published author for three years now and, my gosh, how the time has flown. When I reached my dream of being published, I remember asking myself, “What next?” I did have other books in all phases of production so my creativity was in high gear. But I wondered about all of the things that come with being published.


Did I expect to have the paparazzi watching my every move? No, of course not. But I knew there would now be readers I had a responsibility to. A responsibility to keep the books coming. And not just coming…keep making them better and better.


I am a perfectionist at heart and launched myself into a frenzy of writing to keep up with my self-induced deadlines for my future novels. I had accomplished my dream of getting published, now I wanted to be multi-published. Once I published the next few books then I gave myself a new dream…winning a contest. Then with my first contest win I finally had concrete evidence that my writing was worthwhile to show my well-meaning family and friends who worried that my “hobby” was taking over my life.


I had readers emailing me to tell me how much they enjoyed my books, my reviews were awesome, my editor was asking for my next book, and I had received some royalty checks. All of this while I worked a full-time job, was newly divorced, raising my two children as a single mom, and re-entered the dating scene after 17 years of marriage. Introducing myself as a romance author certainly kick-started the conversation!


I had the craziest schedule with working during the day, taking care of the kids and writing every night once the kids were settled. I wrote into the wee hours of the morning because I knew I had to keep writing and producing books or the name recognition and professional reputation I was growing would be lost. But this craziness had also given me my next dream…to quit my full time job to write full time. I haven’t been able to do that yet and while I would love to write all day long with no other job to interfere with my creativity, I worry that I would be giving up my “free” research - all that people watching all day that gives my imagination a boost with new ideas for new stories. Now when I tell someone that I’ll put them in a book, I’m actually not kidding!


Yes, tapping away at my computer all day would certainly help me produce my books faster, but I also enjoy seeing the outside world. As writers we can get so wrapped up in our writing and the worlds we create that we can forget there’s a real world right outside our door.


People have asked me how I manage to do so much in a day every day. If I stopped to think about it then I’d probably never be able to do it. And I’m not alone - many authors sacrifice time with friends and family to dedicate time to their writing. And that’s okay because our writing means something. We are providing hours of enjoyment for our readers to allow them to escape this sometimes crazy world. We owe it to our readers to give them the best possible product.


And we owe it to ourselves as professional authors to keep plugging away and making our lives work with our writing any way we can because we’re living the dream.


Don’t stop to think about it…just do it 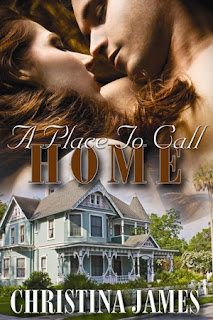 A Place To Call Home, by Christina James


Dangling precariously from a ceiling, Hannah O’Leary never expects her rescuer to be so gorgeous…or so irritating. After a horrible childhood of running from her abusive father, Hannah moves from place to place expanding her restaurant chain, never allowing herself to get close to a man, and never choosing a place to call home.


From the moment he pulls Hannah to safety, Austin “Mac” MacDevin is captivated by the saucy redheaded woman who wishes to hire him for renovations on her new restaurant. Mac, a divorced single dad raising three sons, isn’t prepared for the lust that feisty Hannah ignites in him.


Working together, Hannah and Mac’s passion heats up. Her spitfire attitude is just what Mac needs to shake up his orderly but lonely life. Surprisingly, Hannah blends in easily with Mac and his boys, creating a home life she never had. When Hannah realizes Mac can give her the family she’s yearned for, can she stop running and set down roots? Or will the cruel plot of Mac’s ex-wife make the decision for her and destroy the only love she has ever had?


He cracked a smile then laughed.


“You are so friggin’ beautiful, Hannah. And then you open your mouth and fire comes out. It’s, well, just such an amazing package I can’t believe no one has scooped you up yet.” His hands slowly rubbed her arms, sending delicious shivers down her spine.


Worried about the boys upstairs, she kept her voice soft but her words stern. “Don’t you dare patronize me.”


“Think what you want, but I have no reason to fluff my words.”


He was too close. She lost her concentration. “Maybe it’s your way of getting into my pants like you want to.”


His eyes darkened, became serious. “Darling, when I want to get in your pants, I’ll seduce you like you’ve never been seduced before. I promise you. You’ll forget your name.”


God, she’d already all but forgotten it right now.


“You won’t get the chance,” she said with heat.


His grin was devilish. “Oh, I will. There’s no sense us fighting our attraction. It’s just a matter of when we end up in bed and who takes the lead.” His hands slid to her waist, his fingers kneading her skin ever so lightly. “Which, given both our personalities, should be quite interesting and something I must admit I’m looking forward to.”


She poked his chest. “You listen to me, Austin MacDevin. I’m not some game you can play. I’m a busy woman and don’t need to put up with shit from you. So let go.” She pushed out of his embrace and walked away, fighting her desire.


“Hannah,” he quietly called after her.


She stopped, hesitated, and turned to face him, his voice tugging her heartstrings. The dreaminess in his eyes revealed pure lust and hunger, and her temper lost its bite. She couldn’t deny she wanted him any more than she could live without air.


He sauntered to her, his tall shadow cascading over the deck floor. The desire in his eyes mesmerized her. His gaze roamed her face then rested on her lips. Those long fingers skimmed her jaw while his arm wrapped around her waist and gently held her against him.


Mac bent his head, his lips covering hers, the kiss as gentle as a butterfly’s wings brushing over her skin. His hesitation appeared obvious, the way his arms quivered while they circled her. Her own nerves electrified when her heartbeat quickened against her breastbone.

Email ThisBlogThis!Share to TwitterShare to FacebookShare to Pinterest
Labels: A Place to Call Home, Christina James

Excellent advice, Christine. We do sometimes forget about the real world. Nice work on the story!

Love your advice, Christine. Besides writing, I live on a small family farm, and in both cases I do whatever needs to be done to get the job done. Your book sounds entertaining. Good luck.

You're so right about not forgetting the real world. As writers, I think we tend to sink so deep in our imaginary worlds, we forget to live in the present. Thanks for visiting ROP.

I think I'm going to make a sign that says 'JUST DO IT' and put it above my monitor. Your post was very encouraging, thank you, and is so poignant about the 'responsibility' we set up with that first book re: our fans. Best of luck with your books sales!