What do you think our forefathers would say about America today? I hesitate to ask, but hope they might be a little impressed by the inventions of the day anyway. Enough that they could ignore some of the things that have gone wrong in our country politically, economically, fundementally. I sometimes like to imagine some of the leaders during the 1770s traveling forward to our time. You know, so they could fix some things. George Washington, Thomas Jefferson, Samuel Adams, and Benjamin Franklin could totally clean up America, don't you think?

Our history is full of bold folks, but I think the men and women who were active during the American Revolution are among the boldest. Imagine signing the Declaration of Independence knowing that if the Patriots didn't win against the British, you had basically just signed your own death warrant. In the words of Benjamin Franklin at the signing, "We must all hang together, or assuredly we shall all hang separately." They knew they were the underdogs up against the most powerful army in the world at the time, and yet, that didn't deter them from fighting for what they believed in. And they won!

This Fourth of July, enjoy a short Patriotic story and remember to be thankful for the liberties you have. 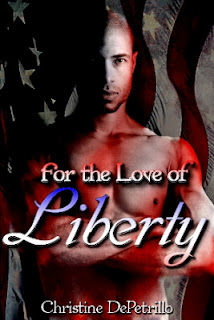 Grace Heaton is a Patriot ready to fight for independence. Desperate to get involved, she slips on her brother’s clothes and plans to sneak toward battle, but a cry of pain in the night changes everything.

Isaac Fields is a runaway slave. He enlists with the powerful British army in hopes of winning the freedom he so deserves.

When Isaac is quartered in Grace’s Boston home, life, liberty and the pursuit of happiness take on an unexpected meaning.


"Ms. DePetrillo's strong-minded main character and immediately apparent problem make for a very engaging beginning to For the Love of Liberty."
Long and Short Reviews

Email ThisBlogThis!Share to TwitterShare to FacebookShare to Pinterest
Labels: American Revolution, Christine DePetrillo, For the Love of Liberty, Fourth of July, Independence, romance

Love the American Revolution and the stories surrounding it. For the Love of Liberty looks like a get read for the 4th!

I love this time period in history. I get to teach it and had a ball writing about it.

Wow, how did you fit that plot into a short story? I guess I should read it to find out! LOL