Have you ever planned an event that you wanted to be just right? You work endlessly over every detail to make sure your party is a success. Painstaking time is spent to get every aspect of your event perfect...from picking out the date of the event, invitations, the food, to even where your guests should park. Every detail. Nothing is overlooked. For in the end your one desire is for everyone to leave satisfied and happy they came. 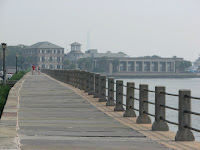 That's my mindset when I sit down to write a book. My one desire is to create a story that will stay with a reader. I want my book to be the one you can't put down and even disappointed when you finish it. Okay, maybe, I'm getting a little carried away, but you get the idea. I want you to enjoy my creation.
Like planning a party, you have to create the right mood and atmosphere.

If I ask you what you think of when you think of a romantic dinner, doesn't your mind wander to a small table covered with an elegant white tablecloth in a dark and secluded area lit only with two candles burning on either side of the two wine glasses. A single red rose bud sits in a crystal vase serving as the centerpiece. While a couple of empty chairs wait for the lovers to enter the room. Not what you would plan if you were planning your ten-years-old birthday party. 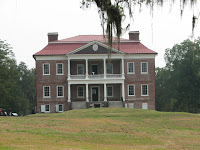 That's why when you're writing the setting is so important...like setting the table.
I was thinking about settings to books while I was editing an upcoming release. I have two books coming out soon. Ruse of Love in August and Another Night Falls in September. Both are set in Charleston during the American Revolution. They even have a couple of character exchanges. But I was thinking of how the stories evolved. Truthfully, both were inspired by Patriot Secrets. I have said many times I'm fascinated by the American Revolution. While I was doing research on the American Revolution for Patriot Secrets, I literally stumbled over the Southern Campaign. When I was in school, I swear I never learned about the battles in the South during this time. 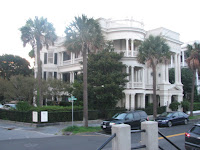 The whole of the war took a interesting turn in the South. We Southerners even then walked to a different beat. The more I researched, the more I was drawn to this place, Charleston...Charles Town before the American Revolution. Interesting, intriguing, romantic all words I connect to Charleston. Last summer, I visited Charleston and fell in love with it. It was just as I imagined...more so. Different I have to admit from my visit to London this year. Not going to go into details about my trip to London yet, but my visit to London didn't inspire me the way Charleston did and I write about both places. London though is a huge city in the middle of getting prepared for the Olympics.

Charleston on the other hand...just walking down the Main Street inspired stories within me. Remember I write romantic suspense. Charleston still holds within it a charm of people forgotten; a remembrance of a time lost. Charleston has character...good and bad...that's good for me. Without conflict, I wouldn't have stories. At a convention last year I attended a seminar given by Donald Maass, he said something that when I write I live by.

What’s the worst thing your antagonist must do? Make it against his/her principles. Make it unthinkable. Then make it imperative.

To do this to my characters, I have to have a setting that would enhance my stories. Charleston is perfect.

For me, my stories cry for a setting such as Charleston. Underlying the beauty of Charleston is a different character. To understand better, you need to understand the early Charleston. No matter the beauty, Charleston had death surrounding it. With its warm weather, Charleston became a haven for sickness, mainly fevers of all sorts from yellow fever to malaria. The area was made up of a diversity of people from the elite to slaves and don't forget the Indians within this mix. The elite of Charleston tried to emulate the aristocrats of England. Their homes illuminated their wealth even today you can see the magnificent dwellings. Yet most of their wealth was built on the back of slaves. During the American Revolution, at times the war seemed as a civil war which had little to do with the British. More as if the war gave anyone who held a grudge against another justification to go after that person. Greed and revenge motivated vicious crimes. But within Charleston, there were also brave, courageous men and women who help forge our country. I love some of the stories I've read of the brave women and their actions they took to save lives and their homes.
On August 7th, Ruse of Love will be released. It's Book Two in the Winds of Betrayal series.


The tides of war have shifted. When all eyes turn south, Doctor Jonathan Corbett finds himself once more thrust into the war’s turmoil. On assignment from General Washington, the dashing doctor discovers his mission has taken him straight into a conflict where the British are not the only ones to be feared.
Rebekah Morse has no time to contemplate the exploding war around her. Caught up as a pawn in a deadly conspiracy, she finds her only hope lies with her old friend, but things have changed since they last saw each other.


Yet destiny has not intervened in their lives without cause. Rebekah’s strength, courage, and breathtaking sensuality sets within Jonathan a desire he swore never to feel again. When Rebekah’s life is threatened, Jonathan is determined to save the stubborn woman whether she wants to be saved or not. Now Jonathan and Rebekah must face the perilous threat together—only to discover a passion they never imagined...Ruse of Love by Jerri Hines-Coming August, 2012!

Following this release, Another Night Falls will be released. Another Night Falls is Book Three in the Tides of Charleston Series!
Sumner Meador walked in a world of wealth and privilege of Charles Town’s elite, but that was years ago. Now he fights in the Southern backwoods driven by the passion he holds for the Patriot cause, shadowed by his past.  Reeling from a devastating defeat at the hands of the British, Sumner seeks haven at his farm, only to find an interloper, an unwelcome and unwanted distraction. He has no time for the young woman or the complications she brings with her, but soon discovers he has no option but to give aid to the stubborn, courageous beauty whether she wants it or not.
A widower, Sumner has been haunted by the death of his wife and is consumed with a desire for revenge. Jane Kilmer has been violently thrust into the midst of the civil war ensuing in the backwoods. Hiding from one of the most dangerous vigilantes, Jane trusts no one. Suddenly, she has no choice but to put her life in Sumner’s hands. Both desire revenge, but neither wants what happens-to fall completely, undeniably in love with each other- so much so, that both are willing to die for the other. And they might have to.
Another Night Falls coming September, 2012!
Both books are set in Charleston during the American Revolution...both a historical romance/romantic suspense. Both, I hope, will be a must read...and you will put down the books satisfied and happy you read them!

Settings are so important. I really feel like they shine when the author has an attachment to the place they're writing about. Yours are always very well drawn. It's one of the things I've noticed most about your writing. Best of luck with your new releases, Jerri!

You're right...I think writing comes so much easier when you do have that connection. Thanks.

I agree. Settings can sometimes make or break a story. Both sound like stay up all night reads. Best of luck with them.