How Important is a Title? by Alison Henderson

I don't subscribe to many newsletters, but I am on Joanna Penn's list for The Creative Penn. I've read Joanna's blog for several years--ever since I started toying with the idea of indie publishing--and have always found her advice accessible and useful. She frequently has guest authors, and one of her guests last week, Michael Alvear, wrote a column I found particularly timely. I'll hit the high points, but you can read it for yourself here.

Like me, Michael is a bit of a data geek when in comes to marketing. Unlike me, he has the resources to go above and beyond the norm in his data collection. For his latest book, he actually commissioned a research lab to research lab to conduct an eye tracking study on Amazon's book pages.

The researchers showed a group of subjects the Amazon book page for a random thriller to which Michael had no connection. They then tracked the eye movements of the test subjects to see which sections of the page caught their attention and where they lingered longest. Some of the results were expected; others surprised me.

As you might expect, the most attention-getting element of the page was the cover. However, the next--by far--was the title. The potential readers spent much more time looking at the title than the blurb. That surprised me. So many books today have generic titles that are not particularly original and say very little about the story, and publishers are at least as guilty of assigning nondescript titles as indie authors, if not more so.

According to Michael's research and personal experience, uninspiring titles can make a huge difference in sales. He cites one example of author Gerry O'Sullivan's book with the original title of Servants of the Empire. Upon release, it fell flat on its face. When it was re-launched as Gangsters of Shanghai, sales soared, and three months later Sony Television optioned the book!

This got me thinking about my current manuscript, the third book in the female-bodyguard Phoenix, Ltd. series. Since I first conceived the series, this book has carried the working title Child's Play. To fit with the rest of the series, I needed a short, punchy, two-word title with some reference to the bodyguard's undercover assignment--in this case as a nanny--but I was never in love with it. As I've written more of the story, I've become even less enamored of the title. It suggested something simple, and that doesn't fit my characters or the plot.

However, I still needed a title that fit the established parameters of the series. After reading this article, I put on my thinking cap and came up with something I like much better--Problem Child. Right off the bat, the new title suggests a certain tension, and combined with the cover I think it raises intriguing questions. Who is the problem child? The owner of the legs, who carries a gun? That could be interesting. Or is it someone else? The client's niece? Maybe it refers to the monkey. Inquiring minds want to know! 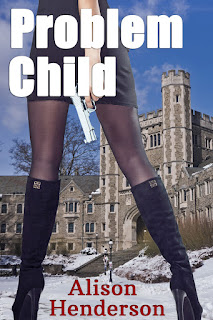 You might not have the last word on your own titles, but most authors have significant input. I hope this gets you thinking about yours.

I agree titles are huge! My last two series, I went with song lyrics. They have the recognition factor going for them, and people gravitate to the familiar. With my new series, I chose suspenseful words that went together...Buried, Lost, Hidden...and imply something is missing since that's a common thread. Then I picked the second word to further reflect the story...Truth, Innocence, Secrets...all again have that suspense factor. I hope they work to attract attention. So far my pub hasn't hassled me about titles except to change the "Lost and Found" series name I'd planned since it had been done a million times, and they had other books with that name. We went with the name of the town instead, Siren Cove, which still has an urgency to it. Titles are hard, but I think Problem Child works a lot better than Child's Play. Really interesting info about what readers look at.

Jannine and Alison you two rock when brainstorming titles. I might have to ask for some ideas on this next series. TWRP pretty much leaves me alone with titles but if they do have issue we have a running conversation. Works well.

Thanks for the interesting article, Alison. So many titles are 'taken'...by rock groups, mostly :-) that it's hard to find something new. We try show the genre of a book with our cover/title...but sometimes our title implies non-fiction and our books show up in strange places...yours may end up in child psychology...my LIE CATCHERS shows up in non-fiction searches as well. That may not be a bad thing...but something to consider.

My publishers change all my titles. In my opinion they chose idiotic ones but, hey, I'm only the writer. An editor at WRP made me change one, but this is one publisher that typically leaves mine alone. My independent works have the weirder names. Thanks for reminding me to take more time to think through a title.

I'll admit to not buying books that have titles with more than four words. Wordy titles make think the book is going to be wordy too... as if the author doesn't just get to the point. Great post!

Jannine, I always love your titles. I thought you'd find the article interesting. Since I advertise these books on Amazon as Sponsored Products, I was encouraged to see readers actually spend time looking at those, too.

Brenda, titles used to be much easier for me. I didn't run into a problem until this book. I want to have the titles in mind for my next series before I start writing it, and they're giving me fits--probably because I'm not sure yet exactly what the tone of the books will be. Oh, well...

Rolynn, I never worry about choosing a title that's completely original. That's almost impossible these days. I just try to find something that hasn't been used TOO many times. I also don't worry about someone thinking it might be non-fiction. No reader is going to buy my book without seeing the cover, and that makes it pretty clear.

I prefer shorter titles, too, Chris, and since these are genre fiction I don't want something lofty or poetic.

Vonnie, your books have such a unique flair, it's a shame to weigh them down with generic or run-of-the-mill titles.

Like Jannine, I went with a song title for my serial killer story, Eyes Without A Face. Thank you, Billy Idol. For my Mad Max series, the song titles were only the working titles. They bit the dust before submitting to my agent and publisher. We did, however, decide on a singular cover design (after not being able to mimic the first cover with the second book) and a two-word formula. The first word begins with Un, as in Unintended Consequences and Uncharted Territory. The third book is Unsafe Haven. In each case, the title carries great weight in the story itself. So, yes, titles matter.

Song lyrics can make great titles, Betsy. The familiarity resonates with readers, like common adages and phrases. I love the titles for your "Un" series. They tie together, yet each says something distinct about the book.

Really interesting post, Alison. I've never thought about the importance of titles other than in respect to their relevance to the book. I've only been made to change a title once, on my first book, and i still regret it. I think 'Child's Play' definitely would have drawn a different reader to 'Problem child.'

I love Problem Child. All kinds of questions come to mind, which would make me buy the book, even if it wasn't yours. ;) Short titles are the way to go. Just ask me.

When I started my PI mystery series, I wanted a title that sounded like a throwback to the days of Sam Spade. The Case of... And I wanted alliteration. So the 1st book about a missing sibling became The Case of the Bygone Brother. Then I had to continue with that phrase to connect the series. As "cute" as I thought the title was, it took up so many characters. When Twitter limited us to 140, I couldn't say much. I wished I'd thought longer about the title of that 1st mystery. BTW, I did have fun coming up with the other titles, esp. Meddling Mama.

The whole article was interesting, Andi. You should check it out if you haven't. I've never been asked to change a title, but this one gave me more trouble than any other so far.

I love your alliterative titles, Diane, but I see what you mean about their length. I try to stick with short so the words are larger on the cover and easier to read in the thumbnail on Amazon.

Great article, thanks for sharing. I love how you turned your title into something more engaging, with more tension. Problem Child is much more enticing. I'm not great with titles, but this article will help me be a little more thoughtful about them. Love the cover!

That is fascinating, Alison. I had no idea. And I think Problem Child is a much better title. I've read the first two books and am looking forward to this one! As far as titles in general, I'm really lousy at them, but I'm going to put more thought into it. I'm thinking of having some of my old covers redone and it would be a perfect time to redo titles as well.

Thanks, Alicia. I just keep tinkering and tinkering until I'm satisfied with every element. I even changed the cover for the second book in the series several months after initial publication.

I thought the article was fascinating, too, Leah. I'm glad you found it useful.