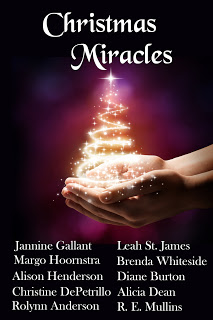 “Pulling this off would take a Christmas miracle.”


Nathan Smith jabbed his brother in the ribs. “Look at that, would you?”


He gave Jared another poke. “For a writer, you’re the most unobservant person I’ve ever met.” He gestured with his chin toward the curb twenty feet away. “That woman trying to wrestle a Sumo-sized suitcase from the back of the cab. I’d bet a week’s pay it weighs more than she does. The cabbie isn’t lifting a finger to help.” Judging by the looks she was shooting the man, presumably watching his meter tick away, any tips she’d be giving would fall into the verbal category.


“Since when do you believe in Christmas, or miracles for that matter?”


Nathan snorted and handed his go-cup of coffee to his brother. “Hold this.”


As he approached the woman, he could hear her muttering to herself, or to the suitcase.


“Come on, you stupid mother of a…” Any curse that might have followed was drowned out by a muffled groan as she strained to lift. In her late twenties or early thirties, she had red, red hair that she’d gathered high on the back of her head into a no-nonsense ponytail. A single fiery strand slipped free and fell across her forehead, onto pinkened cheeks sprinkled with freckles.


She stopped and pierced him with brilliant baby blues while she blew the lock of hair from her face. “Excuse me?” She held the suitcase in a killer grip, her legs—snugly encased in trim black jeans that disappeared into knee-high black leather boots—spread and braced to take the weight, presuming she could hoist the damn thing over the lip in the trunk.


“Let me, please. You’re killing me.” He stepped forward, nudged her hands aside and hefted the suitcase in one swift pull. The cab groaned and rocked with weight’s departure, and as he set the luggage on the ground, he caught her gaze. “There you go.”


Those baby blues rounded, along with her mouth. “Ummm...thank you so much.” She seemed rooted to the asphalt, her eyes fixed on his face, but then she twisted to remove two smaller pieces of luggage from the trunk of the cab.


“Glad to help.” He bit back a grin while she bickered with the cabbie over what she called his “ransom.” As he drove off, leaving a cloud of noxious exhaust in his wake, she turned to glower at the pile of luggage at the curb, hands on her hips, as if she was about to give it a lecture.


“Can you make it into the terminal by yourself?”


Her eyes met his for a nanosecond. “Yes, thank you. I’m usually pretty strong. I managed to get it into the trunk, but…” As if mocking her, the massive suitcase tipped and flopped onto the sidewalk like a whale wallowing in low surf, and he stifled the unexpected laughter that bubbled inside.


“Drat, drat and triple drat.” The woman hefted the suitcase to the upright position, extended the handle and stacked and strapped the three pieces of luggage together in a tower. She gave him another glance. “Thank you again. I’m not sure how long I would have been here if you hadn’t stopped.”


He knew he should move on. He was already behind schedule, but he couldn’t force his feet forward. “Like I said, glad to help.”


“Oh!” A flush crawled from her neck upward, and she dove her left hand, ringless, into the pocket of her puffy pink parka and fished out a five. She thrust it in his direction. “For your trouble.”


He stared at the bill, then laughed. “You’re kidding, right?”


“No…I’m truly grateful. I’m sorry it’s not more.” She gestured to the towering white cruise ship behind them. “They told us not to bring much cash.”


He forced back another chuckle. “It’s not necessary. Really.” He stuffed the cash back into her pocket. She had one of those expressive faces that telegraphed every thought. And right now she looked like she wanted to cry. Or run. “Well, enjoy the cruise. Maybe I’ll see you around.” He grabbed his own suitcase from the curb and headed toward his brother, still obliviously playing on his phone near the terminal entrance.


As he strode forward, his parting words circled his brain. Maybe I’ll see you around? What had prompted that?


“Like what you see, huh?” Jared had pushed from the wall and come forward to meet him. Maybe he wasn’t so unobservant.


Laughing, Jared steered him toward the entrance. “Come on, let’s get checked in and find one of the bars. I think I counted a dozen in the brochure."


Chelsea Henderson sneaked a peek at her hero’s retreating backside as he strode away. Better to let him get ahead, far ahead, before moving inside where she might bump into him again. She needed the week to relax and recharge, not fantasize about hot men who came to her rescue. Still, she couldn’t keep his image from infiltrating her burnt-out brain. The way his biceps bulged even through the sleeves of his blazer when he lifted her two-ton suitcase as if it were a bag of potatoes. Thick and wavy chestnut brown hair. Pansy-soft brown eyes that smiled along with his mouth. And that mouth…


She shook her head to free it of the image as she took her last look at home for the week. A chilly gust of wind chased a trio of sparrows into a row of shrubbery decorated with red and green ribbons. At the end of the block, Santa ding-a-linged a plea for help. New York was in full Christmas mode—her favorite time in the city—and she was cruising to the Caribbean. Without her kids.


“Here you are. I’ve been looking for you!” Her friend Liz appeared at her side and looped an arm through hers. “Excited? This is your first cruise, isn’t it?”


Nodding, Chelsea leaned forward to drag the mountain of luggage inside.


“I was just thinking of the girls. This is the first year—” Her throat closed and she looked up, blinking furiously.


That earned a one-armed hug from her friend. “I know, it’s your first Christmas without the kids. But Maddie and Ali are fine with Adam. You know that.”


“Sure.” She just wished the truth of it didn’t hurt so much. “He was a lousy husband, but he’s a great dad. Right now he’s playing Super Dad taking them to Disney.”


Liz made a sympathetic noise. “I can’t tell you it won’t be hard on Christmas morning—”


“Or Christmas Eve. No putting out cookies and milk for Santa, and we’re going to have to Skype to read my favorite Christmas Bible passage together.” She brushed away a tear from the corner of her eye. “You know, the one Linus reads in A CHARLIE BROWN CHRISTMAS?”


“That’s my favorite, too!” A woman with short dark hair joined them, comfortably round and comfortably dressed. She enfolded Liz in an embrace. “I wondered where you were, honey.”


“Just getting settled in with Chelsea. You remember I told you she’d be joining us?”


Chelsea smiled and offered her hand but was instantly engulfed in what felt like a warm, snugly blanket that smelled like it had been stored in a crate of lemons. Once freed, she said, “It’s wonderful to meet you. I hope you don’t mind my intruding on your family vacation. I know you and your husband are celebrating your 40th anniversary. That's amazing.” She had to clear her throat of another clog of regret. "Congratulations."


Liz’s mother-in-law flapped her hand in the air. “Thank you, honey. Believe me, it's no intrusion. After 40 years, we’re just grateful to be vertical. The more the merrier. I was thrilled when Liz told me her friend would be on board.” She stepped back, narrowed her gaze and hmm’d. Then she clasped her hands and grinned at Liz. “You know who she’d be perfect for?”


Liz shook her head. “I wouldn’t go there. Chelsea is just looking for some alone time, some R&R, even though she deserves to have a little fun. Or a lot of fun.”


Her mouth suddenly dry, Chelsea smiled thinly. “Yes, let’s not go there. And while we’re at it, who am I not going there with?”


Liz leaned in. “I think she means Jared’s brother. He’s a great guy, really. You’d like him. You have a lot in common.”


Chelsea held up a hand, but before she could protest verbally, Sandra patted her shoulder. “No worries, honey. The last thing I want is another woman who’s not interested. My son has been through enough. And if anyone deserves a second chance at love, it’s him.”


I hope you enjoyed Part 1 of my story.  Please stop by tomorrow for Part 2.
Leah St. James
www.leahstjames.com

Oh, Leah, two people I already care about, a lot! Love the ‘we’re just grateful to be vertical’ line. We actually have a cruised planned for our 50 th. Great minds! Can’t wait for tomorrow.

Thank you, Margo! I love that line, too. (Wish I could take credit for it!) I'll have to see if I can convince my hubby to take a cruise some day. :-)

Yay! These are great characters. I'm looking forward to reading more about them!

She brought too much luggage for a weeklong cruise (says the woman who takes one carryon and a backpack for a two-month journey). But this only shows your heroine is new at travel and new at being out on her own. I liked the suitcase as beached whale line...perfect! Great job at setting up the scene and making us want to know who hurt our kind, helpful hero.

Thanks, Jannine. I had fun with them.

I know, Rolynn. She did over pack a tad. (And it has no bearing on my own packing habits at all!) :-) I actually had a line with the cabbie complaining about the amount, and her defending it ("It's a cruise! I need clothes for two formal nights...shoes...makeup!"), but I cut it for length.

GREAT start!! Very descriptive and vivid. Poor Chelsea...away from her kiddos on Christmas, unlucky in love, needing some peace, and BAM, she's going to get walloped by the love bug!! :D Can't wait to read more!

I love it already! And I'm so sympathetic about the luggage. As someone who has struggled to haul her fair share of suitcases out of taxi trunks, I know how welcome Jared's help would be.

Love it! Let's hope this is not a Royal Caribbean cruise where over 300 people just got sick! LOL. I got food poisoning on a cruise once. Never went again, but maybe this couple can change my mind.

Such a lovely beginning. LOL at the beached whale and being vertical and when she tries to tip him. Cute. I hope she enjoys the cruise. Should be interesting with Nathan and Jared along.

Yes, Ally, Chelsea is in for some rough wateres! HAHAHAHAHA...sorry, I can't help myself. :-)

Alison, I had this experience with the suitcase (after over packing a TAD). Luckily my own hero (hubby) came to my rescue.

Thanks, Chris. I did have some medical trauma planned along the lines of seasickness but ended up not using it. My sister said, "Leah, being seasick is NOT fun." Uh, yeah...she's right. I know firsthand!

In case you couldn't guess, here is much of myself in poor Chelsea! Well, except I'm not divorced...and a redhead with a killer body, and...Oh, never mind. :-) Glad you're enjoying the story so far!