Pulling this off would take a Christmas miracle.
Sable Chisholm parallel-parked her Ford 250 in front of her parent’s Phoenix duplex. Though she killed the engine and opened her door, she remained in the truck, calculating the chances of a happy holiday.  Carter, her Ranger partner, adept at working National Park numbers, would be proud she was considering the odds.
“Sable!” her father yelled from the front stoop before he rushed toward her. “‘Bout time you got here. We’re holding up on the margaritas.”
When she stepped down from her truck, he hugged her fiercely, telegraphing love and something else…pity? God, she hoped not. He released her, holding her shoulders at arm’s length. “Gorgeous, as usual, Brownie.”
“Thanks, Pop.”
With father and daughter at six feet tall, eyes the same golden brown, and brows dark and defined, they’d always been close physically and mentally. At sixty, he exuded the energy of a man ten years younger, slim and well-toned. A runner. He was bald except for a salt and pepper fringe of hair, but the effect was a modern, hip look.
If anxiety was what she felt in his robust embrace, she’d know by looking into his eyes.
Before she could assess her father’s expression, her mother tackled Sable around the waist, almost bowling her over with an embrace. Sable squeezed her hard, kissed her on the cheek and said, “Hey, Mutt.” Every aspect of Ruth was miniscule. At an even five feet Sable’s mom was definitely diminutive compared to her dad, Jeff. Her short brown hair framed a perfectly oval face, which moved from frown to abject joy in halves of seconds.
Now Ruth did the scrutinizing.
Sable wore jean shorts and a Sequoia National Park t-shirt, finished off with flip flops. On this hot December day, she wore her long brown hair clipped to the top of her head, happy to be rid of khakis, Ranger hat, gun, and all the other heavy stuff she clipped on her belt. Lately she’d been wearing a Kevlar vest. Nothing comfortable about Law Enforcement gear.
Her mother seemed to read Sable’s thoughts. “I saw a picture on the internet of an L.E. Ranger uniform, honey. I’ll bet you look fierce in it.”
Sable smiled. “The criminals run away at the sight of me.”
Her mother stepped aside, leaving a space between them that should have been filled by Cindy. To cover the fact her older sister remained in the house, Sable cleared her throat and observed the front of her parent’s home, the window boxes brimming with succulents. “Settled in, I see.” Sable had helped them move, BP. Before Poisoning. She hadn’t seen the place since.
After Poisoning. AP. New house. New daughter.
Silence. Even the birds stopped chattering.
Her dad said, “Cindy’s preparing appetizers.”
“Right,” Sable muttered.
Her parents looked startled at Sable’s dismay.  Hers was not a family that favored bluntness.
Sable hauled a suitcase from the trunk, hooked her backpack over her shoulder, and stalked to the front door. “Cindy’s angry because this is the first time I’ve come home since the poisoning.”
“Now, Sable, we don’t hold that against you,” her mother said, struggling to keep up to Sable’s pace, while Jeff lagged behind.
“You should. Cindy should. Nine months of e-mail-only is cowardice. Mine.”
Sable dropped her stuff inside the door and headed for the kitchen to confront Cindy.  “The welcoming committee was one person short, Cin. You still mad at me?”
Another startled look. Cindy was ten years older than Sable, a sophisticated dresser next to Sable’s throw-it-together wardrobe. In a crisp yellow sundress, accessorized with gold necklace and earrings, Cindy was putting the final touches on a serving board of cheese and crackers, a sprig of rosemary in her hand. She placed the greenery, wiped her hands on a towel and embraced Sable. “Welcome home,” she said. Cindy shook back her dark brown hair and eyed her baby sister with green, catch-everything eyes like their mother’s.
Sable remembered her psychiatrist’s warning: “You’ve lost fear, but no one else has. People tend to cover their worries with other emotions. Ask them what they’re frightened about. Try to remember the feeling.” Easily said. Sable’s family exhibited a cauldron of concerns. Where to start?
Beckoning her parents to come into the kitchen, Sable said, “Let’s have this out, family. Before margaritas and appetizers.”  More surprised expressions and bodies taking positions of discomfort: mom put her fingers to her throat; dad stuffed his hands in his shorts pockets; Cindy hugged herself. Sable’s adjustment period was nine months old; her family’s sense of loss was cobbled together in minutes. Perplexity loomed in the small kitchen.
She fingered the rosemary, releasing its pungent odor into the air. The good news: I am alive and I still feel tremendous love for Cindy and my parents. Does the loss of one emotion double the intensity of others? “I thank you for visiting me when I was in the hospital.” She made eye contact with each person to reinforce her point. “I’m sorry for communicating so little while I got used to my new personality, but the transition was confusing.”
They stared at her as if she were an alien.
True, that.  She had survived a near-death experience in the line of duty as an FBI agent. The former Sable was a woman lying on the sidewalk outside a tired motel room, gasping for her last breath, while carbon monoxide dissolved part of her brain. She’d survived, all right, but returned to a life shorn of one defining element. Fear.
In less than fifteen minutes, her family had observed her behavior and discovered she wasn’t theirs. Even if her physician and the FBI psychiatrist called her ‘fit,’ and even if she’d strapped on her gun and gone back to full duty, Sable would fail this Christmas litmus test. Since they couldn’t recognize her, she was about to ruin the holiday for everyone.

Dear Reader,
You have just met Sable Chisholm from my new novel, FIRE IS NICE (out early next year).  Tomorrow, you'll meet Carter, and learn more about Sable's challenges as a brand new person.  Check out my eight suspense novels, already published at http://www.rolynnanderson.com.  See you tomorrow! For your viewing pleasure, here's a giant redwood in Sequoia National Park, my setting for FIRE IS NICE. 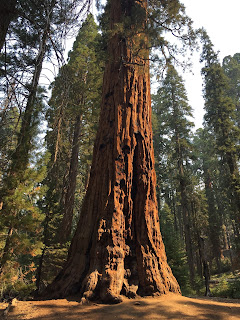 Sounds like some complicated family dynamics at work. I'm cheering for them all to pull through this.

Thanks, Jannine...hope they can pull through, too.

Wow, what an opening! Very intriguing. This is much more holiday stress than burning the turkey or drunk relatives. :) Can't wait to read more!

Thanks, Alicia. I never do go the normal way :-) Often for family reunions, like at Christmas, members come with new baggage...always an interesting dynamic. But Sable is definitely over the top!

A great start, Rolynn. I can't wait to find out what's been going on and why her family doesn't want to talk about it.

Intriguing beginning. You definitely have me cheering for Sable. Hope the family gets through this crisis in one piece.

Thanks Vonnie. Sable gives new meaning to a work in progress since her injury.

BIG changes in families are hard to manage...especially at Christmas when everyone is supposed to be merry!

What a terrific beginning, Rolynn. So intense. I am so curious about what's about to happen. I hope the family can weather this crisis.

You are so kind, Diane. I'll take terrific and intense...happily. Perhaps this family needs an intervention? Stay tuned!

Leah, thanks! The malady is rare...I know everything about the amygdala now, trust me. To lose fear at 30 years of age is truly a burden...just you wait for how this all plays out!

I guess our minds were on the same track as the hero in my upcoming story is also named, Carter.
Intrigued and waiting to see how you work everything together.