Carter Glass sat in front of his mother’s computer.  While he waited for Quicken to update he looked out at the horizon, as if to catch sight of Sable’s location in Phoenix, some thirty miles away from his parents’ place in Mesa. She was spending her first Christmas with her family after her life-changing injury.
Her challenge was monumental; his was small, by comparison.  Ever since his father had been laid off, both his mother and father had gladly pushed tax-reporting responsibilities to their only son. “You’re the numbers man for the Pacific National Park System. Handling our measly account is child’s play.” His father turned over bill-paying to his mother. When conversation turned to budgets, dad left the room.
The trouble was, every time Carter analyzed his parents’ income and expenses, he died a little inside. Social Security and savings barely met their living expenses; Carter’s monthly check of an additional $500 allowed them to go out to dinner on occasion or save up for a vacation. But his generosity didn’t sit well with his folks. This year, Carter’s Christmas gift to his parents had no dollar value attached: caring for the family cat while his parents stayed overnight with a sick relative.
Carter sat out on a balcony hung over a pool area, walled in by other units exactly like this one. He missed his own computer and four monitors, set up in a Sequoia National Park cabin. Usually he enjoyed working alone, but this place was cramped and sterile, a typical shotgun condo with the kitchen, island, four-chair dining room set, couch and two chairs, lined up in a congested march to the lanai.
With columns of figures screaming his father’s failures, Carter felt anxious about his own future. And missing something.
Sable.  He’d promised to help her with an anti-poaching strategy, but he hadn’t communicated with her for a month.
Poe made a sound from his curled up station on the tabletop. The long-haired animal, named to honor Edgar Allan Poe’s short story about a black feline, was Carter’s pet, given to him by a girlfriend years ago, and adopted by his parents when Carter was assigned to Sequoia. The problem with Poe: when left alone in the apartment or a kennel, the animal screamed like a banshee.
The cat observed Carter with unblinking yellow eyes, mouth pursed in judgment. “Wrong time to rendezvous, Poe. Sable hasn’t seen her family for eight months, so I don’t want to interfere.”  Sable had been poisoned by carbon dioxide while on an FBI surveillance in a motel, a malfunctioning pool heater sending deadly fumes into her room. Her partner had died and she’d sustained damage to her amygdala, robbing her of fear, forever. Shunned by other FBI agents for being over-eager to engage criminals, she’d been assigned to Sequoia to catch poachers.
Poe re-crossed his front paws and continued the piercing stare.
“I wonder how she’s doing?”
Sable’s assignment to Sequoia had upended Carter’s quiet, orderly world. She was a hurricane of a woman, her abject bravery alternately highlighting all his fears so he felt like a pansy, and raising his protective emotions to such an intensity, he couldn’t keep his mind on his work.
A tiny movement of Poe’s head telegraphed interest.
“Worse is being away from her. Wondering. Worrying.”
Poe’s ears twitched.
“She’ll frighten her family like she scared me. And they’ll pity her, which she’ll hate.”
The cat rose from his curled up position, yawned, and hopped to the floor. Throwing back a ‘Time for food’ yowl, Poe trotted to the kitchen.
Carter stared at the throbbing cursor, aware his heart had taken up a similar rhythm. He’s spent a month In Zion, troubleshooting the park’s burgeoning visitor problems. He should have enjoyed the time away from Sable’s chaotic personality, but he hadn’t.
The cat yowled again, sounding like a mortally wounded child.
“Work alone, son.” All of his youth, Carter had heard his dad’s complaints about inept, greedy and selfish co-workers, laying blame for his layoff on a colleague conspiracy. “Find a job you can do by yourself. No one else has your best interests in mind.” So for the past two years, Carter had holed up in a Sequoia National Park cabin, building his reputation. “Lone Star,” they called him. For Carter, solitude signaled success.
Until Sable arrived with her incessant questions, wild ideas, and fearlessness.
Poe gave Carter the stink eye from the kitchen, a look he often got from Sable during their rocky partnership.


My dad was right about co-workers getting in the way. I was fine until Sable roared into Sequoia.

Dear Reader,
Now you know more about Carter from FIRE IS NICE.  Stay tuned for the third part of my story tomorrow, when you'll find out how the holiday ends for Sable and Carter.  Another Sequoia picture to please you is below.  And don't forget to take a look at my novels on http://www.rolynnanderson.com 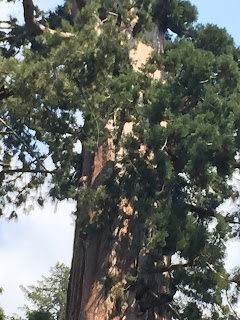 Posted by Rolynn Anderson at 12:30 AM

I read parts one and two straight through. What an interesting concept...no fear. Can't wait to see how their holiday ends.

Thanks, Brenda. Rarely are people born without a functioning amygdala, but disease and injury can injure that part of the brain and take fear away. Sable's been a challenge to describe. No fear verbs or adjectives!

I like Carter a lot. His personality is very well-drawn. Love the cat!

Jannine, thanks. Cats, because their mouths are closed, seem judgmental to me...or at the very least, they seem to be listening...without interrupting :-)

You have incorporated so many neat details in this small section: the walled-in condos (houses, too, which surprised me when I visited because I'm used to open spaces even in subdivisions), Quicken (LOL), parents who don't know how to live within their means plus an adult child trying to help them. He certainly has his hands full. Now I understand how she was poisoned. And the repercussions. Scary. Well, not for her. But for everyone around her. This is going to be a great book, as well as a terrific holiday story.

I'm really enjoying this. LOL Shotgun condos. I've been in a few and that describes them perfectly. I'll be eager to see how you wrap this up. I'm hoping he hops in his vehicle and goes for her.

Diane, you are precious to me. This books has been such a challenge...to think I might be on the track...YAY! For all of us, the 'great book' is a pursuit. Thanks for thinking I might be going there!

Oh, Vonnie, you have a heart similar to mine. A man meeting up with a fearless woman... a Jane Bond? What is he to do with a woman more courageous than she? She is difficult...will he find her too high maintenance? Thanks for enjoying the shotgun condo concept...you are the best kind of reader to me!

I'm a day behind! Love your descriptions and word choices, Rolynn, like this: "...a typical shotgun condo with the kitchen, island, four-chair dining room set, couch and two chairs, lined up in a congested march to the lanai...." Perfect visual. And Carter sounds like a sweetheart, but certainly NOT a pansy. :-) Great part 2!

Anonther one a day behind. Your descriptions are so well done, I feel as if i’m there with both Sable and Carter, as well as rooting for them both. Now i’m off to be with them again. Lucky me. ;-)

Fascinating! I'd never heard of this disorder, but now I am sooo intrigued. This scene is great, made me feel like I knew Carter and Sable, and I like them both. I'm going over now to read the conclusion, since I came in late. :)