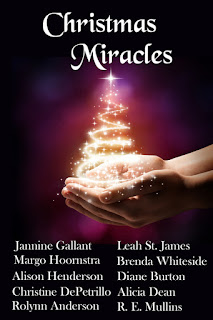 
While Deputy Dawg checked out the building, customers gathered around Tess on the sidewalk. She’d told the story of what happened enough times to engrave it on her brain. Not that she’d ever forget. The “oh, dears” and “aw, shits” resounded in the cold, clear air. Finally, Dawg told her she could go in. He needed a list of what had been taken and destroyed.
She would deal with that later. First, she had to clean up her restaurant and salvage what she could. “Folks,” she called out to get the small group’s attention. “I can’t open today. I am so sorry. I can’t—” She broke off on a sob.
Gabe came up to stand next to her. “If we all pitch in, we can get the job done quickly.” When several people nodded, he turned to Tess. “Put on the coffee. We’re going to need some.” He gave her the quirky smile that made his gray eyes scrunch up, just like she remembered.
“I’ll be right back with brooms,” Gloria Jansen called out then headed down the street to her bookstore.
“Ditto.” Abby Ten Eyck waved as she turned left toward her gift shop.
Meanwhile, Gabe led the others into the café, leaving Tess standing outside with her mouth hanging open.
As people pushed tables aside, Eric followed Gabe’s instructions to bring out trash containers, brooms and dustpans, even the snow shovels. As much as she disliked being ordered around in her own place, Tess followed suit.
Shirt sleeves rolled up, Gabe gave out orders like a drill sergeant. This from the rebel whose lackadaisical attitude had forced her to chose Ken over him. As she worked side-by-side with fellow shopkeepers and townsfolk, she thought about the irony. She’d loved the wild boy, but Gabe couldn’t promise her the solidity she needed after her parents’ contentious divorce. The man who promised her that stability had reinvented himself during a mid-life crisis, crashed his newly-purchased motorcycle, and left her a widow and Eric without a father.
“Looking good,” Gabe said as he hitched his hip on a stool at the counter. He’d already refilled his mug with what she thought was his fifth or sixth coffee.
When Gloria saw that the coffee machines had been smashed, she again ran back to her bookstore for her coffeemaker. Someone went down to the bakery and brought back pastries. With so many people working together, the debris was gone, floor and tables cleaned. Word of the destruction spread. Ed Morrison brought sheets of plywood from his hardware store. He and Gabe nailed the plywood over the broken windows.
“I’m not sure good is the right word. I can’t prepare food here, even if I had any. The fundraising dinner was supposed to be here.” Close to tears again, Tess straightened from her slouch against the counter. “The basement.”
She tore through the kitchen. She unlocked the door next to the walk-in cooler and raced down the stairs. Clomping behind her, Gabe followed. “Nobody would know this was here.”
“Good thing.” She opened the auxiliary refrigerator. “Thank goodness. The chili is here.” Then, she yanked open the freezer and sighed in relief. “The cornbread muffins, too.”
“So, what’s the problem? This food is okay, right?”
“There's too much destruction. I'm sure the health inspector wouldn’t allow food prep or service.” She leaned against the refrigerator. “I have food and nowhere to serve it. I might just as well forget the fundraiser.”
Strong hands on her shoulders, Gabe turned her around. “When did you get so defeatist? The Teresa Barnes I used to know would never give up.”
“The Teresa Barnes you knew is long gone. No more starry-eyed optimist. Tess Visser is a realist.” She headed up the stairs.
When they got upstairs, she thanked everyone for their help. “I can’t tell you how much what you’ve done means to me. When the café opens, you and your families are welcome to a free dinner.”
As her friends, neighbors, and fellow shopkeepers left, they all patted her shoulder or offered words of sympathy. Once again, she found Gabe half-sitting on a stool at the counter, a cup of coffee in his hand.
“Thanks for your help, Gabe. What are you doing here?”
“Drinking coffee.” He held up the mug. “You always did make good coffee.”
“I meant why did you come here this morning? It isn’t like we were open at four.”
He shrugged. “I was heading home and saw the lights on. I needed a cup of coffee.”
“Home? At four in the morning? You still like to party all night?”
His eyes clouded for a moment. “Yeah. Something like that.” He stood. “Thanks for the coffee.”
As he walked out the door, her chef Wes came up next to her. “That Gabe Summer. Man, was he a help.”
“Eric,” she called. “It’s almost nine. Get to school.”
“Mo-om, it’s vacation.”
She thunked her forehead with the heel of her hand. “Sorry, kid.”
“’S all right.”
“About Gabe?” Wes repeated. “He’s different.”
“Not really. Still stays out all night partying.”
“That isn’t what I heard.” Dean Rider had come up behind her. “He took Jane Nickleson to the ER in Holland last night.”
“What? What happened to her?”
Miss Nickleson had been Tess’s and everybody’s history teacher for forty-some years. A tough, old bird who put up with no nonsense.
“She had a heart attack. Once she was stabilized, he stayed with her. Then, they brought in a kid who’d been in an accident. Nobody from here. I heard he tried to help but the kid died.”
“What do you mean he tried to help?” she asked.
“He’s a doctor, you know. Came back to take over his dad’s practice.”

After Gabe got into his SUV, he sat there for several minutes, eyes closed, his head resting against the window. Partying all night. That’s how she still thought of him. A wild kid with no rules, no ambition. Since he hadn’t stayed in touch, of course she’d think that.
Damn, that kid’s death hit him hard. Twenty-five years ago, that could’ve been him, tearing around on his motorcycle popping wheelies, ignoring everything his dad had drummed into his head not to do. No wonder Teresa—Tess—refused to go away with him.
“Let’s go see the world,” he’d said, patting the seat of his Harley. “No cares, no worries. Just you and me, kid.”
He hadn’t realized then what he did now. How scared she was of no direction. But, damn, he sure hadn’t wanted the life his dad outlined for him. An ironic laugh burst out of him. His dad had gotten his way after all.
A knock on his window jerked Gabe out of his reverie. Dean Rider made a roll-down motion, despite the fact that nobody had crank car windows anymore.
“You okay, there, Gabe?”
He opened the window. “Yeah. Must have dozed off.”
“How’s Jane? Will she be okay?”
Miss Nickleson, the history teacher whose class nobody wanted, had seen his potential and given him the best advice ever. Join the Marines. They’d make a man of him.
“She’ll be all right.”
“Good thing you were there when she started having pains. You saved her life.”
As he did each time he came back to Far Haven, he’d stopped in to see his mentor. CPR, the ambulance ride, the helplessness pacing the ER, then the teen. His heart weighed him down that he couldn’t save the kid.
“You look done in, boy.” Dean was still talking. “You need to get home and get some sleep. Good thing you did in there.” He jerked his head toward the café. “Organizing everybody like you did. Tess is mighty grateful to you.”
Gabe let his mouth curve in an ironic smile. “I’m sure she is. See you later.”
He had one more thing to do before getting some much-needed sleep.

I agree, really nice progression. What is Tess going to say when she finds out what Gabe was doing all night? And how are they going to put on that fund-raiser?? I know, I know. I'll just have to wait for tomorrow! :-)

You do such a good job with the cozy town in chaos. Your phrase: "He made a roll-down motion, despite the fact that nobody had crank car windows anymore," gave me a pang of nostalgia. Pretty soon that gesture won't work for readers any more. Heavy sigh. But the reader WILL recognize our hero and heroine need each other. Good work!

Leah, you're right. Wait until tomorrow. :)

Jannine & Christine, I love Gabe, too. A reformed bad boy. What's not to love?

Rolynn, I wonder if my kids even know that gesture. Old folks do since we used to have crank windows. LOL

I'm loving this. Really like your characters. How the heck will Tess save her plans?!

I love Gabe!! I love that he is actually a hero, and she thinks he's still a jackass. :) Very good story...now, I can read the conclusion!