Sable glared at a row of barrel cacti, feeling prickly, herself. She’d taken a seat on the patio, giving her sister and parents time to hash out their angst, or whatever you did when a changeling showed up for Christmas. So far, she’d stopped more conversations than she’d started. She read shock in her mother and Cindy’s expressions; her father listened, looking bemused and puzzled.  Since he was a research-nut, Sable was sure her dad had Googled amygdala problems to death.  How did it feel to witness a living, breathing example of fearlessness in your own daughter?
As of an hour ago, her parents and sister were aware of her after-poisoning activities, nine months of prime pulp fiction material: two affairs, one with a married man from her office. A DUI and a brawl in a bar when she’d broken a guy’s nose. Less incendiary were her adventures at bungee-jumping, parasailing, wave-boarding, and snow skiing. Parachuting was on her bucket list. The medal she received for bravery following an arrest of drug-smugglers last month, was also a point of discussion, as was the fact no one in her L.A. office wanted to work with her thereafter. Talking about Dr. Sharon Dixon, Sable’s psychiatrist, claimed almost an hour of detailing. The shrink had gifted Sable with strategies to move forward, and a signed clean bill of health to resume duties as an agent.
Sable went on to explain all her trips to the hospital from the beginning of her posting at Sequoia. Three times. Warned more might be more coming.
Funny. Every person she knew complained about fear being a weakening factor, a source of shame, even.  Shouldn’t her family be pleased and proud Sable was intrepid?
Another point she made to her family: “Carter Glass is the only person who knows my story. He’s a big-picture numbers man for the NP system, and since I’m helping him build an anti-poaching strategy for the parks, I thought he should understand my background. He’s promised to keep the details to himself.”
Cindy asked, “He’s in Sequoia?”
“He’s cat-sitting at his parent’s in Mesa.”
More questions and answers, soon exhausting all of them.  When her phone chimed, she’d taken it from her pocket and looked at the screen. “I’ve got a few calls to make.  I’ll head outside and take care of some business while you hash over what you’ve heard so far.”
Done with her phone conversations, Sable had wriggled on the lawn chair, read the time passing on her watch, listened to muffled conversation inside, and closed her eyes. Was it time to grab her unpacked bag and return to Sequoia?  Better check the weather report to see how much snow had settled on Highway 198.
“Sable?”
Her eyes opened at Carter’s voice. “What in the world?  How did you get here?” As he walked toward her, she focused on his face, his dark brown beard, mustache and hair, framing kind eyes and a smile. No eyebrow up in dismay, no head shaking in judgment. For the first time he looked happy to see her.
He said, “I’ll never be able to scare you, but I can surprise you.”
She rose slowly and walked toward him, still thinking he was an apparition.  “But. How. Why?” She pointed to the animal cage he placed on the pavers. “Who?”
“Complete sentences, please.” he said, eyes dancing.
She grabbed onto his belt loop and yanked.
Pulling in air at her gesture, he said “Jeff…your dad called me. He invited my parents and me to join you for dinner tonight. My folks aren’t in town, so you got me.”
“He called you?”
“Glass isn’t a common name in Mesa.” He looked down at his short-sleeved blue shirt belted into khaki shorts. Leather sandals. “He said dress informally for a barbeque.”
“I haven’t seen you or heard from you for a month.”
“About that. Turns out I needed a little time to think. But I’m here, now. I interpret for food.” He jerked a thumb toward the cage. “That’s the family cat, Poe, who also enjoys free meals.”
Sable’s parents and Cindy came to the patio before she could respond, placing a pitcher of margaritas, glasses and the appetizer board on the table. Their smiles were almost smug. Cindy poured the margaritas, their father passed drinks around, and they all clinked glasses.
“Welcome to our home.” Jeff held up his glass to his guest.
Carter grinned. “Thanks for inviting me, but I should say, if your phone call hadn’t come I would have crashed this little party.”
“Seriously? And what do you mean, ‘interpret for food?’ ” Sable put down her glass, feeling left out.
“You see, I had an epiphany about what an ideal colleague should be.” Carter set his glass next to hers. “I’ve been reading your e-mails for a month.  You’ve been sharing your ideas with all the parks.”
He held up a hand to stop her from responding. “You’ve given me ideas I can use, and you pushed me to do valuable on-site research. But I haven’t added much to our partnership.”
Carter’s hand stayed up so Sable remained quiet.
“Most important, I remember my own challenges in adjusting to your fearlessness. Since you are a stranger to your family, I’m here as your interpreter, explaining who you are today, at Sequoia, where we admire you, not just for your bravery, but for your compassion and leadership.”
A lump the size of Alaska formed in her throat when she saw her family’s broad smiles and felt her father’s hand squeeze her elbow.
Carter took a swallow of his margarita, snaked his arm around Sable’s waist and raised his glass high to her family. “I’m a numbers man, you know, bent on understanding anomalies. Well, this Christmas I’ve come to help the Chisholm family learn about Sable, my most fascinating outlier, yet.”
And with that, Sable’s first Christmas AP, after poisoning, took on the glow of a miracle. 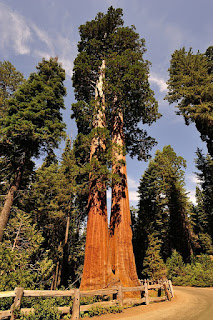 Dear Reader.  You have just met Sable Chisholm and Carter Glass, characters in my newest novel FIRE IS NICE, set in Sequoia/Kings National Park, where fire nurtures trees and relationships J.  Watch for it early in 2018.  While you wait to hear Carter and Sable’s story, I have eight other suspense novels for you to read.  Check out my website for more information: http://www.rolynnanderson.com
Posted by Rolynn Anderson at 1:00 AM

Lovely, heart-warming ending, Rolynn. What a guy. Sigh.... :-) I'll definitely be checking out their bigger story in FIRE AND ICE.

What Leah said. I wanted to stand up and do a happy dance when Carter arrived on scene. What a great guy! And the fact her dad called him. Perfect. Merry Christmas.

Such a great ending to an intriguing story. Can't wait to read Fire and Ice and get the whole picture. Merry Christmas to you and your family.

I was hoping he'd show up with the cat in hand. LOL Great ending, Rolynn!

Leah, thank you. Fiery is this relationship, for sure. Carter has no idea how to handle a fearless woman...a question in my mind was: Could any man? As I said, when I dumped all the fear words for Sable, there were very few left to describe her. Yikes!

Margo, thanks. I really like Sable's Dad. I'd like to do more with him. Family has to accept us/love us, no matter what, right? But imagine what a challenge a changeling brings!

Diane, it's a pleasure to intrigue you (one mystery writer intrigues another...YAY!) An Merry Christmas to you and yours!

Jannine, my animal thing got out of hand in this story. There's a rescued wild burro Sable raised (who had asthma as a baby), named Wheezer, and a girl pig named Chopper. Sable's parent kept goats for a cheese-making business. Poe, the cat, came out of nowhere. Maybe it's time for me to get a dog?

Rolynn, I waited until I could read the whole story, beginning to end. What a fascinating concept and characters! Kudos to you. I love that you've brought so much originality to this romantic suspense. Can't wait for Fire is Nice!

Ha, Sable has done many of the things I'd like to do if I had no fear. (I have very little fear, but I DO have enough to keep me from going too extreme :)). Carter is awesome...what a great story. Love the ending!

OOOOOh nice intro to the book and a couple of very interesting characters. Thanks for the story, Rolynn.

Alison, thanks for giving it the full monty. It's a little tricky to make the story into three sections. I'm glad the concept and the characters pleased you. I do hope you like FIRE IS NICE!

Alicia, this character has taught me a great deal about fear, especially intimacy and rejection, the biggest fears of most humans. Notice how the two are intertwined...what is it about the human brain that makes these two monumental fears?

Brenda, I love to hear an OOOOOh out of you! Thanks for the kudos. This book is with my editor now...we'll see what she says.

Intriguing characters and made me wonder what I'd be like without any fear... hmmm...

The first week of December flew by so fast this is my first chance to read your story.
A lovely ending. Thank you for sharing.

Christine, thanks for imagining fearlessness...I thought I was somewhat fearless until I met (and wrote about) Sable. Talk about a comeuppance!

Thanks, Barbara. Glad you stopped in to read my story. The Roses of Prose has helped me enjoy short story writing!