What Happens When a Vampire Finds He's Stuck On Diaper Duty????

December 11, 2017 is the release date for
DIAPER DUTY VAMPIRE

This sweet and funny novella follows The Blautsaugers of Amber Heights series but can be read as a stand-alone. In it, you will learn the story of what happened to John Alden, Rafe Blautsauger's Enforcement Partner, and Dr. Michaela Blautsauger's lab assistant, Joann Clarkson. And you'll meet two-year-old Cody Clarkson who is as cute as he is stinky. 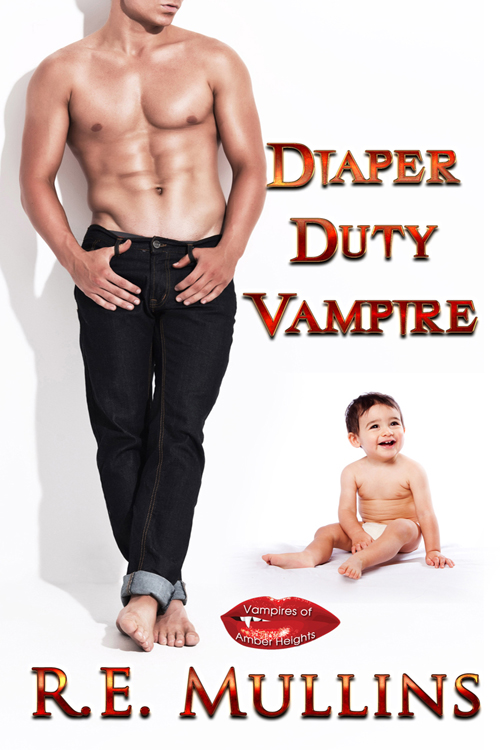 The vampire deserves combat pay. Not for recovering the single mom, but for babysitting her toddler. Steely vampire on one side and determined toddler on the other. Who will prevail?
Can the tough vampire be brought to his knees by a toddler?
Blurb: During the Civil War, Union soldier, John Alden took a musket ball to the gut. As he gasped his final breath, he was turned into a vampire and started life anew in Amber Heights, Missouri. For over one hundred and fifty years, he's lived a rather solitary life as a vampire Enforcer. Young single mother, Joann Clarkson, needs a job and fast. Hoping to be rehired, she returns to Dr. Michaela Blautsauger's lab prepared to eat a hefty helping of humble pie. She comes to regret that decision when she's taken hostage. Things look grim, but she'll never stop fighting to escape. Her son needs his mama. As an Enforcer, John must hunt down the vampire who kidnapped Joann. In his search, John winds up babysitting her toddler, Cody. Changing diapers might be worse than getting staked, but nothing compares to how he feels when both mother and child fall into danger again.
Excerpt:
“I brought you here for two reasons.” John turned to place a hand on her arm.
“To keep us safe.” Joann remembered what he’d told her in the car.
John nodded. “That was the main reason. I do want you and Cody secured until Sabriento is taken care of once and for all.” Suddenly looking tired, he ran a hand over his head. “After thinking about what he said to you, I suspect he’ll soon be back in Amber Heights and looking for you. So that’s the main thing. My other purpose is to give you the option of being mesmerized—” he gave her a lopsided half-smile—“once you’re out of danger. And since Justin has more skill at it than me, if you choose that option, I want him to do the adjustment.”
“What does that mean?” Totally at a loss, Joann looked from one to the other vampire.
John hesitated before answering, “It eradicates memory and will wipe the existence of vampires from your mind. You won’t remember being snatched or fed on. Consequently, you won’t suffer panic attacks or nightmares caused by the ordeal. Bad memories are replaced with something mundane. Like you got busy at work before finishing your shift and going home.”
“It’s painless,” Justin said mildly. Although she frankly examined their expressions, Joann was unable to read either vampire’s  opinion on the matter.
John stretched his legs out in front of him. “Better make that you’ll remember going home late,” he amended. “The same memory will be given to your nutty neighbor.”
To never remember or have to think about Vincent Sabriento—to stop replaying the paralyzing horror of being bitten. She’d also forget she currently worked for a vampire. Dr. Blautsauger would go back to simply being a rather cold and exacting boss.
It sounded like heaven. Then Joann caught sight of the sad little quirk lingering in the corner of John’s mouth. It sounded like hell. “Can…can I think about it?”

Check out what I'm working on now at:
remullins.com

Diaper Duty Vampire now available for preorder.
Posted by remullins at 12:00 AM

What a fun concept, Robin! I love the idea of the vampire enforcer, too. It reminds me of the Wizard of Oz: "Are you a good witch or a bad witch?" :-) Wishing you much success with the new story!

Ha, I love this! Sounds like a great read, and it's quite unique. Best wishes and Happy Thanksgiving!

A fun idea. Have to read this. Wishing you much success.

I wrote a novella that pitted a cowboy against a toddler. Super fun to write! Best of luck with your new release, Robin!


Thanks for the comments. It was a fun story to write.

Diane Burton - If you're serious about reading this novella, I'd love to send you a copy in exchange for a review.

Fun stuff, R.E. Good luck with book! You have a fertile imagination, that's for sure!

Children and animals. They'll upstage a hero all the time. Not to mention befuddle even the most dedicated Enforcer. This does sound like fun. Best of luck!

Thanks to all. Happy Thanksgiving.