Honoring the best of us -- by Leah St. James

Tomorrow is election day. In my state (Virginia) we’re selecting various local officials and all members of our House of Delegates, as well as the state attorney general, lieutenant governor and governor.

For two weeks now I’ve planned to write about the election. For two weeks thoughts have been running through my head about the need to inform ourselves about our local races, and the need for civil discourse. And  now that I’m sitting here putting my thoughts to “paper,” I can’t do it.

I can’t bring myself to delve into all the nastiness and negativity of politics, especially since as an employee of a news organization who deals frequently with our very opinionated readership (my “day job”), I get an earful every day. And believe me when I tell you it’s not pleasant. Most days I’d rather just forget these exchanges, not memorialize them in a blog!

So how appropriate that my answer on what to write came with delivery of Sunday morning’s newspaper. Inside was a special 16-page Veterans Day section honoring a dozen of the men and women in our community who have served in the armed forces.

The stories are all different – from a 99-year-old WWII vet who served in the Himalayas, to a young woman, a native of South Carolina’s low country, who left home at age 18 to travel the world with the Air Force, to a 33-year-old Special Forces veteran of Operation Enduring Freedom. Yet there is one commonality: Each expresses a love of country and pride in serving.

The WWII vet endured difficult living conditions as an engineer traveling from North Africa to Burma, had to jump in fox holes to survive air raids, and was subjected to daily doses of propaganda courtesy of "Tokyo Rose," but came home to his family unscathed.

The young woman who left her home in South Carolina talks about life in the military as a woman. In the lower ranks, she was surrounded by women and experienced little difficulties, but as she advanced in rank, ran into occasional roadblocks from men who weren’t thrilled at having to take direction from a woman. Now, 35 years into her career, she says a decision that started as a way out of a small-town existence became her life. Another woman vet tells about the fight to integrate women, to get VA benefits for women, and to construct a memorial near the entrance to Arlington National Cemetery that honors the 3 million women who have served.

There are several stories of Vietnam vets, stories of evading patrols of Viet Cong, suffering disabling injuries, surviving mortar attacks and coming home to a less-than-welcoming public and the cries of “Baby Killer.” It was an era I experienced as an adolescent, and some of my memories are still vivid. I remember a class trip to Washington, D.C., stepping off the bus on Pennsylvania Avenue into a crowd of Vietnam protesters. I remember seeing terrible things on the news, like people spitting at the returning veterans. I was old enough to process and understand why so many were against our involvement but also old enough to believe the individual soldiers (many of whom were drafted) shouldn’t have been treated like pariahs when returning home, especially by their own countrymen. Years later, I visited the Vietnam Memorial in D.C. and came upon a reunion group. When I thanked them for serving (all choked up and teary-eyed), I got a big hug of thanks in return.


And that’s when I figured out what to say about Election Day. Here it is:

And come Saturday (Veterans Day), maybe see what’s going on in your community to salute those who serve.

Here's a salute to the men in my family who have answered the call. 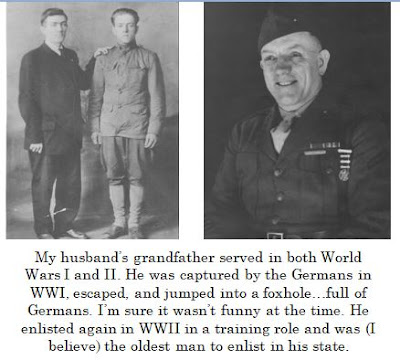 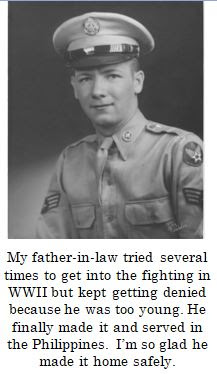 For those reading this who have served (or are serving) or are the family of a service man/woman -- thank you.

Leah writes stories of mystery and romance, good and evil and the power of love. Learn more about her writing at leahstjames.com, or visit her on Facebook. She loves meeting readers and other writers!

My husband, brother, brother in law, cousin and many classmates are all Viet Nam vets. It definitely wasn’t pretty, heartbreaking really. It never ceases amaze me every time I think about those who have the courage and desire to serve in the military and protect us all.

Wow, Leah, you got me all choked up and teary-eyed, too. Thanks for reminding us of the individuals who serve the country we idealize, not the crazy America we're seeing in the papers. My father, rest his soul, fought and was wounded in WWII; my brother (whom you will hear about on the 10th) fought in Desert Storm. Men and women would NEVER go through the hell of war if they didn't believe our country's ideals were worth fighting for. We need to keep their vision in our heads to move forward.

I never understood why vilifying men who were drafted and didn't ask to go to war in any way supported the peace movement. They should have been spitting on the politicians not the soldiers. My dad joined the navy at the end of the Korean War but never saw combat. My brother joined the army after high school in the 80's between military conflicts. My nephew is currently in the navy...and I'm holding my breath for him. All were looking for direction and chose service, expecting to acquire skills that would give them a career path. I imagine that's a motivating factor for many young men who serve. More power to them.

I, too, remember the Vietnam war, the protests, and anti-war movements. The "lottery" based on birthdate for who was to serve. I'm so glad you took your post on voting in this direction. Our politicians have gotten our young men into such dangerous situations. At least, now they voluntarily serve and aren't conscripted into service. They voluntarily protect our country from tyranny. They protect our freedoms. They protect us. A huge thank you to all who have served and those continuing to serve.

What a moving post, Leah! My father joined the Navy at the end of WWII, but the war ended before he finished training. OG was in ROTC during college, but the fighting in Vietnam wound down before he graduated, and they were are released with a "Thank you, gentlemen, but your services are no longer required." He has been watching Ken Burns' documentary on Vietnam, and it's very affecting on many levels. I am at heart a raging pacifist, but I still honor the service of those who have answered the call, voluntarily or otherwise.

Nice post, Leah. FDW served during Viet Nam, and I'm skewed by his outlook on military service. Draft and join are such totally disconnected ways to serve. And which war makes a big difference, too, on one's outlook. Voting for the way of life we believe in is so important.

Thank you for a very touching post that came to a rightful conclusion: Vote. I suppose because we're bombarded with news 24/7 and inundated with everyone's opinions on facebook, twitter, and posts, politics seems especially nasty. I suppose it's always been that way, but we weren't swamped with every he said/she said. It wears on us, I think. I'm glad you took us on a different journey.

It was a heartbreaking time in many ways, Margo. One of my teachers was engaged to a soldier who was killed in action, and for as long as I knew, she never moved on either.

Crazy is one word, Rolynn! :-) Sometimes my husband and I think about selling the house, buying a Winnebago and finding a secluded campsite somewhere in the mountains...with no internet access! But I think I'd probably go crazy myself, so that doesn't last long. :-) But yes, we ned to remember the ideas they have fought and are fighting for. Looking forward to reading about your brother's story later this week!

I love this line, Jannine: "They should have been spitting on the politicians not the soldiers." So true! I remember an Army recruiter talking to my son at one of the colleges we visited, telling him about the great career he could have in the military. I thought for sure my son was going to go for it, but he didn't. It was three months before 9/11. He has a lot of friends who did join up, though. Thankfully they have come home.

Diane, my husband got a lottery number when he turned 18. By the time we met in college, it had expired. He was relieved but said he would have joined the Air Force if it got to that point. I agree, at least now it's voluntary, and many people do make a wonderful career. But the bottom line is they stand for us.

I haven't seen Burns' documentary, Alison. I've heard it's really good but haven't yet tuned in. And I'll bet your father and OG (and families) breathed a big sigh of relief when they were released.

Yes, Brenda, we've seen too many conflicts that didn't seem to make sense for the country. In one, you have people lining up, but in another drafted. I hope all who are eligible to vote turn out tomorrow.

I think you're right, Vonnie, about political nastiness. It's not new or unique to this generation, but the instant, nonstop news feed and ability to broadcast our opinions around the world is. It definitely wears on us. I read another article in the paper over the weekend how social media (constant access and connection) is causing higher levels of fatigue in everyone! It's not surprising!

What a great post Leah. So many of us forget the sacrifices made by others for the freedoms we enjoy. Thanks for reminding us all, and thanks for reminding us about Election Day. . . .. and I voted but I'll somehow manage to keep my mouth shut about 'stuff." (I did say to the woman who checked me in, 'are you sure the Russians haven't voted for me already?' She didn't reply)

Thanks, Andi. I wish I could have seen that woman's face at your polling station! :-) We've survived another election day. I can only hope those who won will do what they promised, or at least try.

Great message. Thank you for sharing these important stories, and reminding us of the importance of voting. My dad was a WWII vet. I am so grateful for the sacrifices of all soldiers.