Thanksgiving is almost here, so of course we're all thinking about food. The smell of the turkey roasting in the oven. The gorgeousness of the pumpkin pie waiting on the counter. I love to cook, and I frequently make up my own recipes, so I thought I'd share my family's traditional holiday fare with you. One problem, though...I never measure anything. I make a killer scratch stuffing for that roasting turkey, but it's hard to write down, "Sprinkle (or dump) in a little of this and a little of that, taste, and add more." Not very helpful. There is one dish I have actually put into recipe form. Cranberry sauce. If you are currently eating this with your holiday meal...

...I'm here to save you from yourself. Even if you're dressing it up so it looks like this... 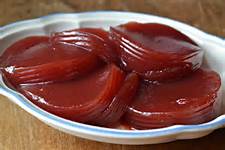 ...it still tastes like that can. Trust me on this. For years, I tried different cranberry sauce recipes, looking for one that was perfect. They all failed my taste test, so I gave up and created my own. It's simple to make and extremely tasty. Give it a shot, so your family can have this... 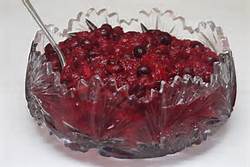 ...with your holiday meal, instead!

If you're looking for an exciting read during the holidays to while away your time while the turkey is roasting, visit my WEBSITE to find out more about my books. Happy Thanksgiving! Please eat responsibly... LOL

Email ThisBlogThis!Share to TwitterShare to FacebookShare to Pinterest
Labels: cranberry sauce recipe, Holiday cooking, Jannine Gallant, thanksgiving, The Roses of Prose Where Romance is Never Out of Season

Now this might be a recipe I could actually do right. Just curious. What’s the stuffing secret? Something I might be able to do as well? Maybe?

You could definitely make the cranberry sauce. The stuffing is fairly complex. Toast your own bread cubes in the oven. I use wheat. Saute chopped onion, celery, and apple in butter. I boil the turkey neck in chicken broth to make it richer then use that for the liquid in the stuffing. Then there are a bunch of seasonings...salt, pepper, parsley, sage, marjoram, and thyme. Taste. Add more of whatever it needs. Sometimes I sprinkle in a little poultry seasoning at this point, depending on how it tastes... As I said, I don't measure anything. When you get it the way you want it, stuff it in the turkey before roasting. Tada!

Great idea to put chopped apple in the cranberry sauce! Thanks for the recipe. Your stuffing is made exactly the way I do it. Cooking that turkey neck for stuffing broth is a family tradition. (Some cut up the giblets and put them in the stuffing, but I'm not a lover of liver, etc.) Thanksgiving is just around the corner...thanks for getting the saliva flowing :-)

Rolynn, my grandma used to put some of the giblets in the stuffing. I'm personally not a fan, so I leave them out. Yeah, the apple is key both in the cranberry and in the stuffing.

Looks delicious, Jannine! I make a cranberry chutney that's really similar but has nuts in it (walnuts,I think). I make it for parties where I have to bring something and serve it with cream cheese and crackers. (I could eat the whole thing.) I have to confess though that I gave up on "scratch" stuffing a long time ago. I doctor up the bagged stuff with sauteed celery and onion, egg, broth and seasonings. My husband and sons could fight over the bowl of the "raw" stuff! And yes, now my mouth is watering... :-)

Can I admit out load that I buy my cranberry sauce at Williams Sonoma? Since we have such a small family and I'm the only one who will eat it, it isn't worth making it just for myself. One jar lasts me through Thanksgiving and Christmas. LOL My best personal Thanksgiving recipe is my pear and cranberry pie, which I've shared here in the past. Happy Thanksgiving to you and yours!

I'm afraid I've never been a fan of cranberry sauce. I do like cranberries dipped in dark chocolate. :)

Yum, sounds good, Leah. Also, it would be a "pretty" dish to bring to parties. Gotta like that!

Alison, I can see where you wouldn't want a giant bowl just for you! Hey, as long as you're not eating it out of the can, you're good!

Thanks for the recipe. I love home made cranberry sauce but have never attempted my own.

Give it a shot, Brenda!

I grew up with cranberry sauce from a can. No wonder I never liked it. LOL My MIL made a cranberry gelatin salad, which my daughter makes now. That I'll eat. My stuffing recipe includes sage and a little thyme as well as poultry seasoning. I'm making a small dish for Thanksgiving since my daughter is making stuffing & so is my son. We'll have a lot of stuffing (out of the bird). I'm hungry!

I grew up with the canned kind, too, Diane. Enjoy all that stuffing. And, yes, I'm hungry, too!

I'm not a cranberry sauce fan, so I am not sure I'll try this, and my family thinks the canned is the bees knees, but I bet they'd love this if they tried it. Maybe I'll make it for them, even if I don't eat it. :) Thanks for sharing!

How can anyone not like cranberry sauce, Ally? Maybe you just don’t like it because you’ only had the canned kind!