Blame It on Rhett Bulter by Alison Henderson

Gone With the Wind was re-released in brilliantly restored Technicolor the year I was in seventh grade. My friends and I saw it in the theater four times. I have never paid to see any other movie four times, but it was worth every penny. It stirred my post-pubescent self in ways I'd never experienced or even imagined. 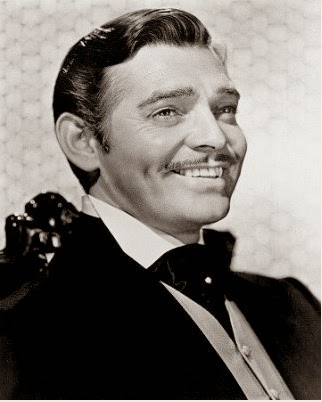 Could there possibly be a more romantically impressionable age than twelve? Hormones are awakening but haven't yet built up a full head of steam. The concept of the opposite sex has growing appeal, but most boys in school seem sadly lacking. Your mind is open to grand gestures, deep emotions, and great passions. What a time to be introduced to Rhett Butler.

I'll never forget the sight of Clark Gable at the foot of the stairs at the barbecue at Tara. Those eyes, that smile, those deep, masculine dimples. I was smitten. I rushed out and bought a poster for the wall of my room. Other girls had teenybopper singers on their walls; I had a man old enough to be my grandfather. But he was a MAN, not a boy. Even at twelve, I knew the difference.

I had read Wuthering Heights and Jane Eyre, and even seen Olivier's interpretation of Heathcliff, all brooding eyes and tousled curls. But Clark Gable as Rhett Butler set a new standard of romantic hero. He was strong, yet gentle. A man of action who loved children. Patient, but gloriously impatient when he'd waited long enough. Even though I was aware of the mechanics of sex, I didn't fully understand the scene where he hauled Scarlett up the stairs (nor her kittenish glow the following morning) when I was twelve, but I understood the emotion. And I wanted it. What woman doesn't? 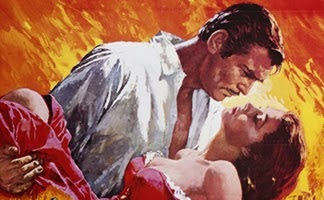 So, it's all his fault I write romance. I'm still searching for my own version of Rhett Butler. Every time I sit down to write a new hero, he's is somewhere in the back of my mind. I don't want to create a carbon copy, but all my heroes have a bit of Rhett Butler in them. Don't yours?

He was spectacular, wasn't he?

Ah, yes. You perfectly captured the essence of Rhett and the thrilling emotions he evoked. He IS the perfect romance hero, flawed but so very sexy and honorable, even though it doesn't appear he's honorable on the surface. One of my favorite scenes of all time is when he swept Scarlett up in his arms and strode up the stairs with her. Sigh... That scene was powerful, and rife with sexual tension, yet they didn't have to show the actual lovemaking scene. Really enjoyed your post!!!

Hangs head. No, I haven't seen the movie. However, I've read the book and still have it on my keeper shelf. Do I get credit for that? Was the book better than the movie?

In a word, Jannine, yes. Many times better.

I'm glad to find so many other Rhett lovers (I even named my first kitty Rhett). Jannine, the book is fabulous - I've read it MANY times - but you really should see the movie. However, be warned that it doesn't exactly follow the plot. That really confused and annoyed me at twelve, before I realized film makers do it all the time.

Clark Gable--what a hunk! Esp. as Rhett Butler. Who else could play that part? I remember seeing it at the theater--probably the reissue you talked about Alison. Never realized my husband never saw it until I got the DVD. It seemed so much shorter than I remembered.

I love Rhett Butler...and agree with everything you said. The first time I saw GWTW I was hooked on everything about the movie, but especially that flirty, strong, hero with the twinkle in his eye and the humor he always wore.

Diane, seeing it in the theater was such an experience - four hours, complete with a real intermission.

Christine, I think it was the twinkle that really got me. Still does!

Jannine, I loved the book, and I suppose it was better than the movie. So much more happened in the book, however, seeing it come to life in technicolor, with Vivien Leigh and Clark Gable and the vivid scenes, etc, was a phenomenal experience. I saw it on the big screen at one point, at the Bijou theatre that's no longer here, I don't remember what year, but anyway, it's a shame that you can't see it like it should be seen. But I do highly recommend you see it. Yeah...the twinkle...sigh....