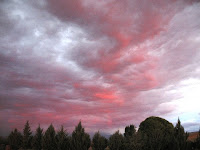 Like one of my fellow Roses, the words hot and August remind me of a song and more than a few memories. "Hot town, summer in the city", a line from the song, always comes to mind on hot, August days. I was born in Phoenix, Arizona in August. Definitely a hot town in August.

My mom says I was covered in a heat rash the first couple of months of my life. I still feel the same about the heat! One of my earlier memories is of walking barefoot, hopping from patch of grass to patch of anything green to keep from burning my feet. We never had a swimming pool but spent many hours playing in the sprinkler. It seems I spent my childhood in shorts, barefooted and consuming mass quantities of Popsicles.

By August, the days were not only hot but humid. In the middle of the afternoon, my sister and I would stretch out on the floor of the living room, close the curtains and turn on television. We'd watch Movie Matinee which played the old movies from my mom's teen years. Those old movies and my mom's stories of her early years in Phoenix were the inspiration for my book, Honey On White Bread.

Many August nights, the monsoons would roll in. First the smell of wet mesquite bush and dust would fill the air as thunderheads built in the distance. They would migrate over the city, boiling pink and purple in the setting sun. My dad and I would sit in the back of his pick up and watch the lightening until the rain came. Drove Mom crazy since she was frightened by lightening.

Did you know you can fry an egg on the hood of a car in Phoenix in the summer? It's true. Can't turn the heat up much higher than August in Phoenix.

Great stories. We have relatives in Phoenix. Love being there, but NOT in August!

Thanks, Margo. Visit those relatives in the winter!

Great memories, Brenda! They reminded me of so much of what we did as kids. I would love to be a kid again! I don't know as if I'd want all the techno stuff they have though. Kids don't know how to use their imagination to play.

I remember one summer my mom had jury duty. My brother escaped the babysitter and fried an egg outside on a rock. Something about the process must fascinate kids! At least it's a little cooler where you're at now.

Gee, we all must have tried. My sister and I fried an egg on the asphalt road in front of our house in August. Even Connecticut can get those kinds of days.

I enjoyed your sensual descriptions of a storm rolling in.

Thanks for the childhood Popsicle memories, too! Though my favorite was the Dreamsicle - hmm, no wonder I write romances.

Brings back very poignant memories as I just relived my childhood in Phoenix, Arizona.

Love your description of the storm rolling in. I remember Popsicles and Dreamsicles have always been my favorite. My son lives in Phoenix. We know better than to visit him in August. LOL

My apologies to all of you for stopping by and commenting. I went out of town but didn't know my laptop was dead. Stayed with family but their computer was dead! Three days is a long time off the net!

So agree, Jody. Kids could use getting back to basics.

I'm disappointed, Barbara. We thought AZ was the only place. LOL