A Hot Excerpt and an Ebook Giveaway - Heat Up your August Nights!

The topic this month, Hot August Nights, immediately brought to mind the sexy scene in Dancing in a Hurricane. Bree and Sixto have been living together platonically for a while, and it’s been difficult for both of them to keep their hands off each other. This scene is one of the first times they both admit they have an attraction for each other.

Excerpt of Award Winning Novel Dancing in a Hurricane: James told Sixto, "Your roommate here doesn't think she can dance."


Sixto glanced at her. "Anyone can dance."


She couldn't read his mood, but he seemed closed in, somehow.


Marisa and Rico came back to the bar, breathless. She asked Bree, "Why aren't you out there?"


She made a face. "Too fast for a first-timer."


"No it's not." Marisa eased onto her stool. "Sixto, take her out there. Show her how to Salsa Cubana."


He reached down into the beer cooler and opened a fresh one for Rico. "Too busy."


Bree caught Sixto shooting a meaningful look at Rico. Great, not only were Marisa and Rico conspiring, now Sixto and Rico had secrets, too. She shook her head. "I'd rather watch. Thanks anyway, Sixto."


Marisa scowled at her brother. "You leave James alone at the bar all the time to dance with the chicas."


Sixto sighed and stalked away.


Bree released her pent-up breath and took a sip of wine. That was uncomfortable.


Sixto appeared on her side of the bar, right in front of her, his hand out. "Dance?"


Bree considered saying "no" to Sixto's request to dance, but would that give everyone the idea that she was avoiding him? That there was something going on between them? 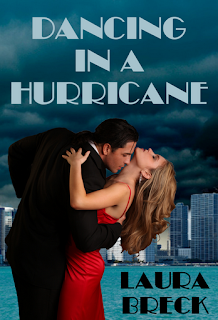 She set down her glass and put her hand in his. His big, warm hand. The tingling sensation started in her palm and raced up her arm, spiraling through her to end low in her belly.


He led her to the floor. He stood stiffly, put his hand on her waist, and took her other hand in his. The other couples pressed against each other and she waited, breathlessly, for the crush of his body to hers. It didn't come.


He danced slowly, their hips a foot apart. His face seemed pinched, his eyes unreadable. She followed his lead, he told her when to step a different way, or turn under his arm. She forced herself to forget that where he held her hand, her palm warmed at his touch. She tried to ignore where his palm pressed hot and firm against her hip through the thin fabric of her dress. Her hand on his muscular bicep felt every sexy flex of each tempting muscle in his arm. She made herself forget that, too.


In less than a minute, the song ended and she stepped away from him.


They dropped their arms, and Bree sucked in air. Without his touch on her skin, her heart slowed from its manic race, and the heat drained from her cheeks. The next song started. A slower, song with a tantalizing rhythm.


She looked at him, his face looked fierce, his eyes severe.


He wanted her to say no, wanted her to run from him and be her usual cautious, conservative self. Well, she'd had enough wine tonight that her backbone was right where it should be. She wouldn't give him the satisfaction of saying no. She nodded and stepped closer to him.


A muscle in his jaw worked for a moment, as if he considered walking away. Taking her hand in his, he put his other palm on her waist. He taught her the steps. They were easier than the last dance and she didn't have to concentrate as hard. The song grew more intense, the primal beat stirred her soul, made her warm deep inside, made her feel sexy. She watched other women gyrating their hips and she let her body move to the rhythm, taking away her inhibitions.


"Goddamnit, Bree." His eyes burned with passion. "What the hell are you doing to me?" He stared into her eyes, put his hand on her lower back, and pulled her tight against him. Pausing for a moment, he groaned and began moving again, sensually, demanding her response.


She gasped, his hard body pressed along her soft one. Breasts, stomach, thighs. A mudslide of sexual awareness covered her, tingled in her nerve endings. He moved his hips the same way she was grinding and she felt every inch of his hard cock against her stomach.


She told herself to move away, but it was too intoxicating for her body to ignore. He spun them to the middle of the floor, away from the prying eyes at the bar. His breath caressed her face, hot and fast. He stared down at her, her gaze collided with his.

Blurb of Dancing in a Hurricane: A Seduction as Overpowering as a Hurricane
When her twin sister dies, Bree Prentis moves from Seattle to Miami to inherit a shadowy business, an upscale house, and her sister’s sexy Cuban business partner and housemate, Sixto Doria. She adjusts to the vivid culture of Miami, but constantly bumping into Sixto is straining her hands-off vow. Bree is looking for a man to give her a happily ever after, and Sixto has sworn off relationships. He knows it’s wrong to want her, but she makes him forget why he's not right for her, makes him crave her natural honesty and wholesome beauty.


When he teaches her to dance the Salsa Cubana, then suggests she spend the night in his bed, Bree is shocked—and tempted. In the midst of a hurricane, Bree surrenders to her reckless desire and makes love with Sixto. Could Bree be the one Sixto's been waiting for? If she finds out he’s hiding a nasty truth from her—their company is a façade for a semi-legal business—she will shut it down, and Sixto will lose the income his family depends on. And more frightening for Sixto, he would lose Bree.


When she researches their company’s outrageous revenue, she sees a pattern of untruths leading back to Sixto. The word ‘love’ enters their relationship, and she prays his duplicity is all a misunderstanding, and his seduction is not merely a distraction to keep her from discovering the truth.
~ ~ ~

Dancing can always get us warmed up for love. What other things do you like to read about where couples are forced to face their desires for each other? Leave a comment for your chance to win an ecopy of Dancing in a Hurricane.
*Dancing in a Hurricane is RomCon's 2013 Reader's Crown Award Winner for Best Contemporary Romance

Email ThisBlogThis!Share to TwitterShare to FacebookShare to Pinterest
Labels: contest, Dancing in a Hurricane, free ebooks, giveaway, Hot Miami Nights, Laura Breck, sweepstakes, The Roses of Prose Where Romance is Never Out of Season

Ohhh! Broke into a sweat with all those moves.

Me too. Sweating here!

I love a variety of things. I'm a fan of romance. Loved the excerpt!