I’m excited to offer an ecopy of my friend Joyce Proell’s book to one lucky commenter. I purchased the code when she gave a talk at our local RWA chapter meeting, and realized I already had a copy.


A Deadly Truth
A man obsessed, a woman willing to risk it all…


Tainted in the eyes of Victorian society by his wife’s suicide, successful entrepreneur Doyle Flanagan turns a deaf ear to the baseless gossip and harsh rebukes. Ignoring his shattered reputation, he goes about his business making money, doing some good for others and making a few enemies along the way. Arrested for murder, he is forced to rely on a feisty school administrator to solve the puzzle. As he struggles to prove his innocence, he realizes gaining the trust and loyalty of Cady Delafield may be more important than his freedom.
On a quest to locate a missing student, school matron Cady Delafield enters a stranger’s house and discovers the woman murdered. Driven to see the murderer brought to justice, she is determined to prevent any further tragedy even if it means joining forces with the very man accused of the atrocity. Against the wishes of her powerful family, she risks her job and reputation to learn the truth. But will the truth, once revealed, drive her away from the man she has come to love? 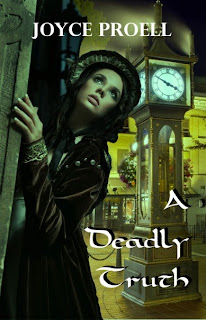 Passion and murder collide in 1880’s Chicago as they race to keep one step ahead of the police who want Doyle to pay for his crime. As the attraction between Cady and Doyle sizzles, they battle suspicions, lies and lethal actions to uncover the murderer before he destroys them both.

Leave a comment for your chance to win an ecopy of A Deadly Truth and I'll chose a winner tomorrow.

Email ThisBlogThis!Share to TwitterShare to FacebookShare to Pinterest
Labels: A Deadly Truth, Joyce Proell, Laura Breck, The Roses of Prose Where Romance is Never Out of Season

WOW! That sounds fantastic. Very cool that there is such a heavy suspense thread. My kind of book! I will definitely have to check this one out.

Already have one. Great read.

Always been fascinated by the Victorians - so many double standards :-) Or maybe too much Dickens in my youth.... The book sounds great,thanks for the intro to the author's work - I'm off to check it out on Amazon!

I love historical novels and I love suspense. What a perfect combination.
debby236 at gmail dot com

Thanks for all your comments. Joyce is a great writer. Congratulations, Debby! You've won an ecopy of A Deadly Truth. I'll contact you via e-mail, but if we don't connect, please get in touch with me at Laura (at) LauraBreck (dot) com. Thanks!