Hot August Night Long Ago and Far Away 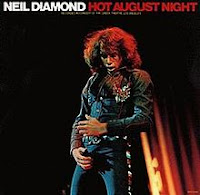 The crowd was on its feet, all but the tree people. They clung to the limbs, afraid to move too much or fall. No one moved to remove them. Simply not safe in that swirling crowd.

From the opening number to the last encore, we were a collective whole there to adore, the performer there to be adored. Neither let the other down.

Mind you, this wasn't the first time I'd seen Neil Diamond in concert. And it wasn't the first time I'd been to a concert at the Greek. I lived a 25-minute drive from the theater. (Two hour drive home afer the concerts, though.) I went all the time in the '70s. Noone, not Manilow, not Devo, not great blues artists, not Earl Klugh, nothing wove the spell Diamond did that night.

My friends and I knew he was doing 10 (!) performances at the Greek that summer. All sold out in minutes. Even with our connections, we had opening night seats in the nose-bleed section almost under the tree people. Man, if anyone of them had fallen, we would have been squished. None of us knew the concert was being recorded. When the double-vinyl set come out, and we heard Diamond give a shout out to the tree people, we knew we had witnessed music magic. We could say we were there on that hot August night.

I've seen Diamond in other venues, larger and smaller, since, but when I think back on that night, when I listen to the CD (now, because I played the grooves off the vinyl), I can still feel the heat of the bodies, the smell of really, really good grass, the music pounding and whispering, the shrieks from the audience. And the grateful bows from Neil Diamond himself.

I wouldn't have my hot August memory any other way.

Sounds like a great memory that sort of sums up an era. Thanks for sharing, Betsy.

I've always been a huge fan of Neil Diamond. He is so talented, yet humble in his mannerisms. Thanks for sharing this special memory.

Betsy, I saw Neil Diamond in D.C. back in the mid-'80s. I enjoyed his music before, but became a (huge) fan afterward. I think Forever in Blue Jeans went on for 15 minutes. Few can deliver live performances like Diamond. Thanks for bringing back a great memory...except for 2-hour wait in the parking lot before we could move. :-)

What a great memory. Thanks for letting the rest of us in on it.

Fantastic memory. How lucky you were to live so close to that venue. I've always loved his music but never saw him in concert. Some day...