Out Pops a Miracle by Brenda Whiteside

After five years of marriage, many years ago, we decided to have a baby. I was pregnant the next month. Five years after I had my son, I wanted baby number two. That child never happened. After many doctor appointments and trying some pretty funny things to conceive, I found out I had a malfunctioning fallopian tube. Those little tentacles at the end of the tube looked like they had a severe case of arthritis. When did that happen and why, the doctor couldn't say. I personally believe having one child was probably a miracle. I learned a great deal about the female reproductive system in the three years of trying for baby number two. The main thing I learned is it's a very complicated system - so complicated not even the doctors are entirely sure of how it works. So every baby is a miracle, especially mine.

Two months ago, my daughter-in-law went to the hospital in labor after a carefree, healthy pregnancy. She 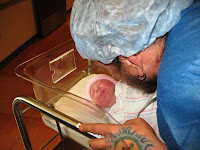 nearly died having my first grandchild. Years ago, both child and mother might not have lived. Miracles are easier to come by with a talented surgeon on your side.

My paternal grandmother was four feet nine inches tall. Her doctor told her she shouldn't have children. She was just too small. Granny gave birth to seven children in her own bed at home. Granny had seven miracles.

I am in awe of the miracle of life and birth. The joining of two to become one. The multiplication of cells that divide and specialize, grow in a liquid environment then burst into a world of air. Each one unique yet a combination of all that came before her. Truly a miracle!

Every child is a miracle indeed. Each life is precious. Congratulations on the child and grandchild.

Congratulations on the new baby. Life is a miracle!

Thanks, Margo and Barbara. True words.

Isn't that ultrasound the most amazing thing in the world when you see it? So happy Sadie's story had a happy ending.

I agree on ultra-sounds. No such thing when I was pregnant back in the stone ages!

A miracle indeed! Wonderful story and I'm so glad mom and baby are all well.

Congratulations on the grandbaby. I'm sorry your daughter had such a hard time.

We've come such a long ways in the last hundred years that death in child birth is nearly unheard of. But, unfortunately it does still happen.

I worried right along with you during the whole ordeal. It is indeed a miracle when everything works out right. I'm ejoying watching Sadi grow through your pictures. Keep 'em coming!

Thanks, Janice and Alison!