May is For Writing Memories, Too...by Glenys O'Connell (Book Giveaway)

I love the Internet. 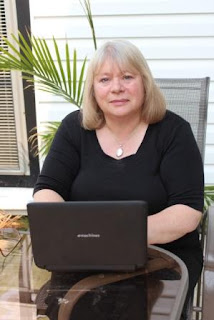 I have always loved the Internet.


Right from way back in the early 1980’s when it first became available to the very rural area I lived in. In those days you had to plug a telephone cord into your computer, none of this cable or satellite technology. And it was slow, at times painfully so. But then, at that time computers were also very slow, and the slowness did nothing to diminish the wonder, the sheer joy of being able to send an article or a newsletter to people in places as disparate as South Africa, Australia, The US and Jamaica, and have it arrive within hours.


Well, yes, I did say it was slow. But in those days it could take anything up to four weeks for a letter in what we now call 'snail mail' to reach any of those destinations from here in rural Canada.


To be able to send copy for articles, promotional materials, web content - this was in the pre-blog days, if you can imagine that - in so short a time was a miracle in communication terms. These days I can send an entire manuscript to a publisher in minutes, send article proposals to magazines far away, write web content for companies across the Atlantic who then use the miracle of the Net to disperse them to clients in other countries…

There's no doubt that writers have benefited hugely from the arrival of computers and the Internet. Sure, people argue there are drawbacks, such as digital books threatening the very existence of real paper books (as if!) and some bemoan the fact that anyone at all can put out an ebook or a dvd or a cd without having to go through the filters of 'professional' gatekeepers such as publishers and record companies.
Well, phooey!


This will all shake out in time. There are awful ebooks out there, unedited, badly written, plotless and pointless. But the simple fact is that, once bitten, the reader will be twice shy. People putting out poor quality work won’t find a market for their next work.
And, as someone who loves writing, I can't see any real reason to deprive others of the fun of putting out their words into the EtherNet.


My first computer was only black and white, and worked on a rather dowdy, extremely limited word 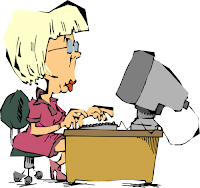 processing system. Then Windows was invented and - wow!
One company I worked for as a journalist proudly presented me with a Macintosh Computer - the Apple trademark was still in the pipeline. This computer, with its tiny monitor, needed a large floppy disc to be inserted in the top drive, and another in the lower drive. The top disc held all the programming information, and without it, you weren't going anywhere!


The bottom disc contained all the material you diligently typed in, and this disc, closely guarded, was the one a courier took to the company's editorial headquarters two or three times a week.
Yes, I can hear you youngsters out there snickering. But that’s fine. Someday your kids or grandkids will compare you to a dinosaur, too.


The daily newspaper I worked for provided portable electric typewriters to its staff, and quickly scented the benefits of a computer network in the office. For myself, running a fairly remote satellite office, they purchased a portable computer. People these days might laugh, but then it was state-of-the art.
To be honest, with its case closed it looked just like a large, square portable typewriter. Oh, but the joy it brought - I could type in all my articles and features, then - get this - I fitted the telephone receiver into the two rubber rimmed holes on the top, made a few adjustments, whispered "AbraCaDabra" or, on bad days, a prayer to St. Jude, patron saint of hopeless cases,  and all my work flew across the ether to my boss, the Managing Editor. I might finish work at 3:30 am, but it was in his computer 100 km away, when he started work at 6:30am


The only glitch, really, was that digital cameras weren't available then. I'm a photojournalist, took my own pix to go with articles and stories, and these were on the old fashioned rolls of film. Where once a courier stopped by my mailbox in the wee small hours and whisked my paper copies of articles off to head office, now he stopped by only on the days I called and asked him to pick up film.
Now everyone has a digital camera - sometimes several if you include the pocket one, the laptop one, the computer one, and the cell phone one…..


Sometimes as sit on my front porch with my laptop, I imagine I can see words and pictures flying by my head, carried on unseeable waves, from thousands of computers and cameras and phones…..
Yes, I love the Internet.

Do You love the Internet? There's your choice of one of my ebooks for the best reason to love the Net.

Glenys O'Connell's love affair with the Internet continues to grow as she dabbles with Indie publishing. Click here to take a look at her list of traditionally published and Indie published books here.
Posted by glenys at 12:30 AM

I remember the days of floppy discs. I saved the first 2 books I wrote on them. When I talked to a computer tech about somehow transferring the files, he basically told me to take my hard copy stack of paper and start typing! Remember those big, bulky envelopes mailed out to publishing slush piles to sit and sit and sit... How much easier is it to push a send button!

What a wonderful trip down memory lane. My first word processor and printer were so large, they took up half the space in the family room. And those huge envelopes containing manually typed manuscripts. And, like Jannine said, to sit and sit and sit. For a year or longer in my case.