Daffodils are a sign of Spring by Barbara Edwards 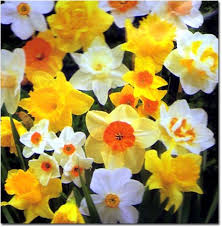 In fifth grade, the teacher insisted we memorize a poem every week. At the time I thought Mrs. Robinson was very demanding, but she had the right idea. All these years later I remember what became one of my favorite poems.

“I WANDERED LONELY AS A CLOUD"
I WANDERED lonely as a cloud
That floats on high o'er vales and hills,
When all at once I saw a crowd,
A host, of golden daffodils;
Beside the lake, beneath the trees,
Fluttering and dancing in the breeze.

The waves beside them danced; but they
Out-did the sparkling waves in glee:
A poet could not but be gay,
In such a jocund company:
I gazed--and gazed--but little thought
What wealth the show to me had brought:

Symbolizing rebirth and new beginnings, the daffodil, or narcissus, as it is also called, is virtually synonymous with spring. It is also the March flower. 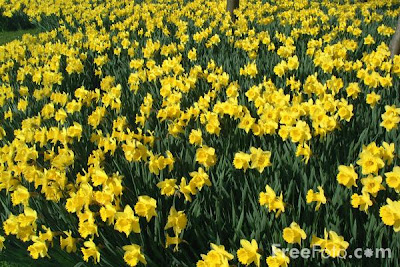 Daffodils are popular in New England  and there are naturalized plantings along field-stone walls, in highway buffers, and yards everywhere.
I’ve wanted to plant them for years, but we’re usually still in Florida when they bloom so my husband wasn’t encouraging.
Finally, three years ago, I decided what the heck. We won’t always be traveling and the bulbs will only multiply.
I went to the store and bought four bags of bulbs. There is a weird tool that looks like an apple corer to plant the bulbs.  I found it difficult to use and after three bulbs got a shovel. I had over two hundred bulbs to plant. (I tend to go overboard.) I actually dug a trench fourteen inches wide and six inches deep. It stretched across the garden in front of the porch.
I missed them when we returned in the end of April, but this year we’ll be home in time because of all the snow. I'm taking lots of photos and
I’m looking forward to them.

Spring should be coming, right? The nice thing about Daffodils, and we have loads too, is once you plant them they keep coming up year after year. Something to look forward to!

this year I'm going to plant tulips alongside the daffodils. I think by the time we stop traveling they'll cover the ground.

Sounds very pretty, Barbara. I planted daffodils about 15 years ago and then ignored them for - 15 years. FYI, they stopped blooming after about 10, so apparently some attention is required. LOL

Hi Jannine,
They do need to be separated if they get crowded, although I've seen patches that are decades old.
Barbara