Being a writer is a big open door. Like reading, one may experience a wide variety of places, times and people that one would not have opportunity to explore in their day to day live. Unlike reading, the writer can take any one of those places, times and people in any direction they care to explore. All it takes is some research, and imagination, and the writer is on their way.

I think I like the research for a story as much as I enjoy the actual writing. A few semesters ago, I took a writing class at college with my daughter. During the course of the semester, we were required to do a research paper. I'd heard the term over the years of my daughter going through school but I'd never personally written one. This was surely going to be a challenge and a lot of fun.

We needed to begin by choosing a subject. So many possibilities. So many subjects. I live in the high desert where the Space Shuttles were built. We have schools named for the different ships and streets as well. years ago, I was privileged to see the Shuttle Challenger as it was taken from where it was built in Palmdale, out to Edwards Air Force Base. It rolled right past me and I was overwhelmed at the size of the white space ship. She was beautiful. Thus, I decided to write my paper on the Shuttle program. 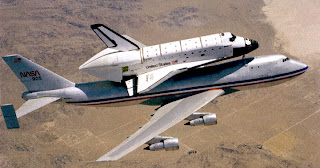 There were so many ships and so much information, I had to limit the possibilities because the paper was only to be seven to ten pages in length. Since I'd actually see the Challenger, I narrowed my research to her.

Everyone recalls the day we lost Challenger in the explosion that took the lives of the seven astronauts. I decided that few knew of the many "First time in History" events that took place aboard her before that fated day.
_____________________________

·                     During the Flight Readiness Firing (FRF) test of the engines, a hydrogen leak was detected. Five days later, a second FRF was initiated that confirmed the cracks. SSME1 (Space Shuttle Main Engine 1) had to be replaced. SSME2 and SSME3 were removed, thoroughly tested and reinstalled. It was the first time the main engines of any space craft had been removed and/or replaced while on the launch pad.

·                     On 18 March, 1965, Russian Alexei Leonov was the first human to space walk. Aboard Challenger, space walking, for the first time would have a purpose other than being able to say one had left the safety of the capsule. Mission Specialists Story Musgrave and Donald H. Peterson tested the new EMU (Extravehicular Mobility Unit) during a four hour space walk, the first of the Space Shuttle Program. Story Musgrove was the only person to fly on all five of the space-worthy shuttles.

·                     At the end of this mission, Challenger made the first night landing as well. On 5 September, 1983, 7,500 feet of desert from the end of the runway at Edwards Air Force Base, California, had to be lit to show astronauts the glide path for the landing. In the dark, Challenger was invisible to the watchers until seconds before touch-down

·                     Aboard Challenger during this night launch and landing was Mission Specialist Lt. Colonel Guion S. Bluford, Jr., the first African-American astronaut in space.

·                     Challenger’s next flight was launched on 3 February, 1984. During the flight, Mission Specialist Bruce McCandless, II, was the first astronaut in history to walk in space untethered to the shuttle via a compressed gas rocket pack called the Manned Maneuvering Unit (MMU). The unit is a self-contained jet-propelled backpack that resembles an easy chair without the seat. The photo of McCandless completely untethered from the Challenger is the most used and most recognized NASA photo of all time. McCandless ventured 320 feet from Challenger, a walk that made him the first human Earth-orbiting satellite in history.

·                     During this mission, launched 6 April, 1984, George Nelson was the next to utilize the MMU. He was to capture the satellite Solar Maximum Mission (Solar Max) for the first retrieval and repair of a satellite. The capture failed and the satellite went into a spin. After control was regained by ground control at Goddard Spaceflight Center, the satellite was captured via the RMS robotic arm. James D. van Hoften assisted Nelson in replacing the attitude control mechanism and electronics before the Solar Max was redeployed. It was now possible to repair satellites instead of writing them off as lost and useless.

·                     Challenger hosted the first shuttle mission to carry two women into space: Sally Ride and Kathryn D. Sullivan. Kathryn made two historical firsts aboard Challenger’s sixth flight. In order to perform her mission of demonstrating the ORS (Orbital Refueling System), Kathryn spent three and a half hours utilizing the EVA unit. She was the first American woman to space walk. She also successfully completed the first simulation of in-orbit spacecraft refueling. She conducted refueling of a satellite using hydrazine fuel and the ORS

·                     On 28 January, 1986, seventy-three seconds after lift-off, the Space Shuttle Challenger exploded, destroying the shuttle and killing all seven of the astronauts aboard. The Challenger’s final first was that the tragedy was the first in-flight loss of astronauts in the history of the United States Space Program.

·                     The second shuttle to join the space program, Challenger hosted some of the most exciting first time events in American history. She flew nine successful missions and left a legacy of knowledge gleaned through experimentation conducted aboard during her short life of completed missions. Ten satellites were launched from her payload bay. Satellites that might have gone obsolete were repaired and returned to service. Challenger served the world well during her few years of service. Her final crew and she, herself, will live forever in the hearts of the many who worked at NASA during her existence And in the history books of the United States Space Program.
_______________________

The Shuttle Program offered so many possibilities to the United States Space Program. It enabled us to do so many things beyond the realm of Earth and provided several spectacular firsts in history.
Thank you for allowing me to share a condensed version of my ten page research paper on Challenger. I enjoyed doing the research at the library and on the internet. Learning how to do a research paper has opened up many possibilities for me for future projects for writing future novels. It was a learning experience and well worth the time.
Cheers!
Visit my WEBSITE.
Visit my Publishers: Whiskey Creek Press - ShadowsForge Series
Whiskey Creek Press - Shyanne's Secret
Red Rose Publishing.

Posted by JenaGalifany at 12:00 AM

Wow, a lot of firsts. Thanks for the fascinating info.

There were many more than I've listed here. I was amazed when I did the research.
JG