I happily killed off my ex-mother-in-law, my ex-husband and an evil-minded gossip in my first attempt at romantic suspense. It was fun, satisfying and emotionally freeing. All that angst and anger flowed onto the page and out of my spirit. It was then I realized I’d been too sweet, too careful to write the nice feelings. My stories were bland. Nothing like the roiling passions I had trapped inside.
Don’t get me wrong. I’m a fairly well-balanced personality. I learned to dig for those buried emotions. A good writer needs to use emotions in writing. The more powerful the emotions you use, the better.  A reader might like a picnic in the park, but a storm-ravaged mountain-top is exciting.
Building emotion is similar to building a character. You start off with the small details. The heroine might pluck nervously at a tress of hair or the hero drums his fingers when tense. Use the hints to show that the character has basic traits that you will make explode off the page.
At first I was embarrassed to reveal feelings during those close-contact sex scenes. It took me a long time to realize much of what I felt was what everyone experiences and by adding those touches readers were drawn into the story.
I’ve enclosed an example. 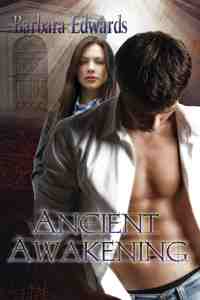 Excerpt:
Legend gave him many names, but the wide halls of his mountain retreat no longer echoed with countless worshipers. He could have ruled the world had his ambition not died with the passage of time. The endless whispers were from the cold winds and the few praying priests. He didn’t care that he couldn’t remember his real name or birthplace.
For an eon he’d regretted the loss of softer emotions. Love had been the first feeling to die, along with the woman who had insisted he would never harm her. He couldn’t recall her features just the merry tinkle of her laughter and the bright smile she had greeted him with every morning. He licked his lips. She’d tasted sweet.
Fierce need flared in his gut and he sniffed the air. Outside his chamber a single acolyte in long brown robes waited to escort him. His mouth curved with a mirthless smile. The silent servants had ignited the flickering wall torches. Shadows jumped and shivered in the drafty halls like nervous virgins.

Fabulous final line in that excerpt! So much emotion really came through. Nice job.

Fabulous final line in that excerpt! So much emotion really came through. Nice job.

Totally got my attention. Great line.

I agree - strong emotion is key to making your story great instead of just okay. Thanks for the reminder.

Thank you all for commenting. It took me a long time to dig deep enough to share internal feelings. But it was worth it.