Hello, and thank you to The Roses of Prose for inviting me to visit!  I'm looking forward to chatting with y'all.


Since there's a great topic up on the blog this month, I'm going to run with it, too, and talk about where I get my ideas.  I'll continue the trend and give away a book, as well, so stay tuned.


I don't normally go out and "get" my ideas.  Usually, they come to me.  Unfortunately, when they do, it's often as a flash of illumination that introduces a character or shows an action.  After that, I'm on my own!

With my first published novel, THE SHERIFF'S SON, I envisioned a small boy twisting and turning and trying to get free from the large hand—attached to the much larger man ;) —holding him up by the back of his T-shirt.  Kevin's on tiptoe.  And in big trouble.  When his mama sees the local deputy sheriff who has captured her son, she knows she's in big trouble, too, because he's the man she'd once loved and lost.  That very brief vision of Kevin twisting to get free turned out to be the catalyst for the book.

In a more recent story, A RANCHER'S PRIDE, Sam Robertson comes home to discover he's a daddy.  He's never known about his four-year-old daughter and doesn't believe she's his.  But when he meets her for the first time, he's confronted with evidence he can't deny.  She is his flesh and blood.  She's also deaf, and he has no way of communicating with her.  Trust me, that was one tough book to write.  Sam has such a heart-wrenching decision to make regarding his daughter, I didn't know how he would ever reach a happy ending.  And the entire book started with one peek into Sam's living room.

With those stories, at least I had a visual to work from.  That's not always the case.  For another of my earlier books, COURT ME, COWBOY, I had nothing but a sentence to start me off:


One day soon, he'd get rid of this wedding ring.


That's it.  Nothing about the character—except that he was male.  No setting.  No clue who the ring belonged to or what this was all about.  (I'm happy to say my readers start the book just where I did, with that very sentence.)


I figured out...eventually...the male was Gabe Miller, and the wedding ring was his own.  But then I had to get him to reveal why he no longer wanted or needed that wedding ring.  An emotion-packed revelation, for sure, but enough to tell me this man truly deserved a happy ending.


In my current novel, HONORABLE RANCHER, I had much less than a sentence to kick-start my imagination.  All I had was the memory of how I felt about my first crush.  This somehow turned into the story of a man suffering—and I do mean suffering!—the same feelings.  Unfortunately, Ben Sawyer has it much, much worse. 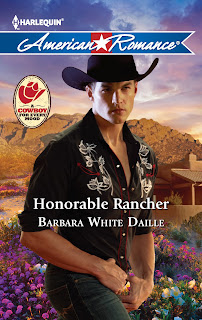 This explains his dilemma:


Bound by a promise to watch over his best friend's widow, what can an honorable man do when the woman fights him at every turn?  Buy the house she lives in, for one thing--and that's when their relationship really gets heated.


He's keeping a promise to her dead husband; she's keeping a secret she refuses to share.  They can't fall in love--but they can't stay away from each other....


Ben's not the type of hero I usually write about.  That didn't matter.  In the space of a few paragraphs, I found him sexy and intriguing and endearing and as worthy of love as any character who's ever come knocking on the door of my imagination.  I had to tell his story.  After this very brief setup, I'll show you why:


Ben and Dana are groomsman and matron of honor for their best friends.  They're alone in the garden outside the banquet hall, while everyone else is inside at the reception.


In all the years since grade school, nothing had ever come between Paul and Dana.  Ben had always honored that.  Now he had to make doubly sure not to cross the line.  "Today has to be hard for you," he said, keeping his voice low.


"Seeing Tess and Caleb so happy?  Why should that cause me any trouble?  I'm glad they're finally together."


She meant it, he knew, though her words sounded as brittle as the chipped ice in the banquet hall's champagne buckets.  In the moonlight, her eyes glittered.  Had she tried for a lighter tone to keep tears from overflowing?  Or to prove how comfortable she felt around him?


Why did she have to prove anything?  Why the heck couldn't she enjoy his company, the way she always used to?  If she'd just give him that, he'd feel satisfied.


She'd grown quiet again, and he gestured toward the fountain.  "What brought you out here?  Wanting to make a wish?"


She shook her head.  "No.  Those are for people who aren't willing to work hard to get what they want."


"I can't argue with you there."  Still, he felt tempted to toss a coin into the water for a wish of his own—that for once, she'd let him make things easier for her.  "But there's such a thing as working too hard, you know."


"Ben, please."  She gathered up her dress and stood.  "You called the truce yourself, remember?  I know you only want to help.  For Paul.  And because we're friends."  Her voice shook from her stress on the word.  "We've had this conversation before.  Now, once and for all, I'm doing fine."  As if to prove her point, she smiled.  "And I have to go inside.  Tess will be tossing her bouquet soon.  I wouldn't want to lose out on that."


A tear sparkled at the corner of her eye.


Missing the chance to catch a handful of flowers couldn't upset her that much.  He knew what she really missed—having a husband by her side.  Her husband.


But neither of them would have Paul back in their lives.


Before he could get to his feet, she left, running away like that princess in the fairytale his niece asked him to read to her over and over again.


No, not a princess.  The one who took off without her glass slipper—Cinderella.


Dana was no Cinderella.  She hadn't left a shoe behind.  Hadn't even dropped a button from that pink dress as something for him to remember her by.  As if he could ever forget her.


She'd been the heroine of a story he'd once created long ago, a story he'd had to write in his head because he hadn't yet known how to spell all the words.


Once upon a time, that was it.


Once upon a time, in the Land of Enchantment—otherwise known as the state of New Mexico—Benjamin Franklin Sawyer had high hopes and a huge crush on the girl who sat one desk over from him in their classroom every day.


No other girl in town, Ben felt sure, could beat Dana Smith, and most likely no other woman in the world could compare to her, either.  In any case, without a doubt, she was the cutest of all his female friends in their kindergarten classroom.


Unfortunately, when the teacher moved his best friend, Paul Wright, to the desk on the other side of Dana's, Ben saw his hopes dashed.


The crush, however, continued.  For a good long while.


As for Benjamin Franklin Sawyer's hopes...


Well, not every story had a happy ending.


At the beginning of this post, I said ideas come to me.  That's true.  They pop into my head and spark my imagination, making me want to tell the stories, not letting me rest until I do.


This isn't an easy job, since they've left me hanging without much to go on!  ;)  But by the time a book has ended, I'm happy to have found out what the story is all about.  I'm thrilled to see the hero and heroine have found their happily ever after—and I hope my readers are, too.


Originally from the East Coast, award-winning author Barbara White Daille now lives with her husband in the warm, sunny Southwest, where they love the lizards in the front yard but could do without the scorpions in the bathroom.


From the time she was a toddler, Barbara found herself fascinated by those things her mom called "books."  Once she learned the words between the covers held the magic of storytelling, she wanted to see her words in print so she could weave that spell for others.


She hopes you will enjoy reading her stories and will find your own storytelling magic in them!


Barbara would love to have you drop by her website:  www.barbarawhitedaille.com  You can also find her on


Please look for HONORABLE RANCHER, in both print and e-book, at the following locations:


To win an autographed paper copy of your choice of THE SHERIFF'S SON, COURT ME, COWBOY or A RANCHER'S PRIDE, please leave a comment or question for Barbara.  Check back in the comments area here on Saturday, September 29th, to find out if you've been selected as the drawing winner!
Posted by Laura Breck at 12:00 AM

Email ThisBlogThis!Share to TwitterShare to FacebookShare to Pinterest
Labels: A Rancher's Pride, Barbara White Daille, Court Me Cowboy, Honorable Rancher, The Roses of Prose Where Romance is Never Out of Season, The Sheriff's Son

I'm honored to be here today to join in on the topic of where we get our ideas.

And I'm looking forward to chatting, so please bring on the comments and questions.

Good morning, Barbara. Loved your post. I can identify. It's amazing when a book can come from so little to begin with. Your books all sound like great reads. Writing about a relationship with a deaf child must have been quite challenging. Thanks for the post and the give away!

Hi, Brenda - you're very welcome, and thanks for your kind words.

It really *is* amazing what our imaginations can do when they get busy, isn't it? I'm so glad mine's a workaholic. ;)

Sounds like a few of your books feature children. I do that, too. Kids add an honest dimention to a book tha makes it very real. Thanks for sharing your writing process with us!

Hi, Jannine - yes, I do like to put kids into my books and have them in all of the stories, though their age ranges can differ.

I actually had a couple of teenagers in FAMILY MATTERS and loved them.

You're right about the honest dimension. And then there's the fact they add to the hero and heroine's troubles!

Thank you for sharing how your imagination works. Loved the opening line about getting rid of his wedding ring. Enjoyed the excerpts and learning about your writing process.

Margo - it's always fascinating to me to read how other authors handle all the creative aspects of writing.

Thanks for your kind comments, and I'm glad you liked the opening of COURT ME, COWBOY. It was just one of those lines that *would not* leave me alone.

Thanks again to the Roses for inviting me to guest blog.

Also, we have a drawing winner! And her name is...

Jannine, you have your choice of one of the books listed at the end of the blog post. Please get in touch with me using the contact form at my website with your book choice and mailing address.

Wow, thanks Barbara. I'll look forward to reading my choice, Court Me Cowboy. Got to find out why he got rid of the ring!

And may I say, I can't wait for you to read COURT ME, COWBOY. ;) Hope you enjoy Gabe's story!