ROMANCE AWARENESS IN A TIME OF WAR

Margaret Tanner adding her take on Romance Awareness month.
All stories of love lost and found are touching.  For sheer poignancy, nothing can compare with a love story set against a background of war. Picture it, a young woman farewelling her man as he marches off to battle. Fear and pride in her heart. Only God knows his destiny. Is there a bullet with his name written on it, waiting for him in some foreign field? Are memories all she will have to comfort her in the long lonely years ahead? Maybe a faded photograph of a young soldier who never reached his full potential, because he bought freedom with his blood?
The following scene comes from my novel, Wild Oats, which was an EPICON 2010 Finalist. 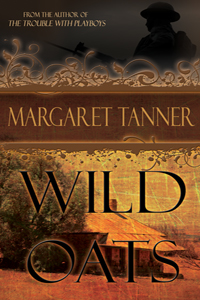 The year is 1914, just prior to Tommy Calvert’s embarkation for the 1st World War. On their honeymoon, he and Allison attended a dance.
The lights dimmed when the Tango was introduced. Every man in the ballroom held his partner close. This dance had made the Palais ballroom notorious. Evil, depraved and immoral, were a few of the descriptive words printed by the newspapers, but Allison liked it. Even though neither she nor Tommy could dance, they copied the antics of others, and laughed and clapped as much as anyone.


The tempo of the place quietened when the saxophones in the band started up to accompany the man who sang, “If you were the only girl in the world, and I was the only boy...” They stood close together, listening, until it finished.
“Let’s leave now,” Tommy said, and Allison waited near the door as he went to collect her coat. He helped her into it, took her hand and they left.
Instead of making for the train station, Tommy led her towards the beach. It was a cool night, with dark clouds scudding across the sky. Like thousands of glow-worms, the stars twinkled. The breeze blowing straight in off the sea smelt moist and salty, the sand soft beneath her feet.
They didn’t speak as they strolled away from the lighted Palais. Except for the muted sound of the waves, silence reigned on the beach, and Allison felt as if they were the last two people left in the world.
Tommy stopped and drew her close. “I love you, Allison.” He started whistling the tune. “If you were the only girl in the world, and I was the only boy,” softly in her ear and she leaned her head against his chest.
A magic spell cocooned them. She didn’t want to speak, lest the spell be broken. Some instinct from deep within warned her this moment, once it disappeared, would never come again. She closed her eyes to shut out everything except Tommy’s nearness.
Meanwhile, twelve thousand miles across the sea, German artillery pounded French villages into oblivion.
Wild Oats is published by The Wild Rose Press
http://www.thewildrosepress.com/wild-oats-p-3893.html
Posted by Margaret Tanner at 4:34 AM

What a lovely ecerpt. I can hardly wait to read the book.
Barbara

Oh my, your set up made me want to drop everything and write a war story!! Maybe I should just read yours instead!

Wartime romance is in a class by iteself when it comes to heart-wrenching poignancy. My grandmother lost her first love in WWI, and while the wound scabbed over, I think she still felt the pain of the loss decades later. There was a real sense that the world would never be the same...and it never was.

Thank you for dropping by Barbara, I have to say Wild Oats is one of my favourite books.

Thank you Laura.
Sorry I haven't been around to answer straight away but the time differences throw me out a little.

Hi Jannine,
Thanks for leaving a comment. Well, you could always write your own war story romance and read mine as well?????

Hi Allison,
Yes, it must have been terrible for women like your grandmother. I am sure you would never completely get over a loss like that. I mean, you might be lucky enough to find love again, but I still think a little corner of your heart would for ever belong to your lost love.
One has to ownder also, how many women were never able to find another man to love. I am sure there would have been plenty. That I am afraid, is the tragedy of war.