A NEW ROSE OF PROSE

I feel privileged to be blogging with so many talented authors! And, since this is my first time blogging with Roses of Prose, I thought I’d introduce myself. 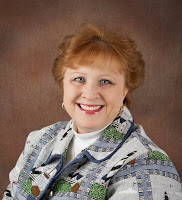 I’m Andrea Boeshaar, a mom who is proud of her three grown sons and a “grammy” of 4 precious grandchildren. Family is very important to me. I’m also a published author of fiction and nonfiction, a public speaker, and a certified Christian life coach. I am a firm believer that good decisions lead to happy endings. In a world filled with wounded hearts and broken lives, it's comforting to know there is hope -- and it's only a decision away.
You can find out more about me by logging onto my web site at: www.andreaboeshaar.com
I enjoy everything writerly – in fact, that’s the name of my personal blog: . Everything Writerly In it, I discuss the writing life, the publishing industry, my books, and I have guest interviews now and again, so be sure to follow me.
I’ve been writing since 1984 – that’s the year I received my first rejection letter. That made me a real writer! I kept trying and finally my first book was published in 1994. Since then, I’ve written about 25 novels.
My latest book is Undaunted Faith, was released by Realms/Charisma House in May of 2011. It’s the 4th and final historical romance in my Seasons of Redemption series.
I think my favorite time period encompasses the Civil War years --Pre-Civil War times through the Reconstruction Era. My father was a Civil War enthusiast and his interest rubbed off on me. It's a wartime that's often romanticized, largely because of Gone With the Wind, However, it was a terrible, horrible war (and what war isn't?). Even so, the Civil War marked both an end of an era and new beginnings. To many Americans, it was an end to a way of life. To many more, the Civil War signified the start of true freedom in this country. So it's a very important time in US history!

My series, Seasons of Redemption, is set in this time in our Nation’s history. No shameless plugs intended. I’m just super excited about these Christian historical romance novels! So let me tell you about them.
The first book in my series is, Unwilling Warrior.
It’s 1862 and Valerie Fontaine must face her father’ rejection and escape during the Civil War – or be arrested for treason!

The second book is called, Uncertain Heart.
The year is 1866 and Sarah McCabe discovers true love during her summer as a governess in . But will her employer, a bold and handsome veteran captain of the Civil War, stand in her way of happiness -- or be a part of it?

The third is titled, Unexpected Love.
In , in 1866, Nurse Renna Fields must conquer her insecurities over an unsightly birthmark in order to love a man who needs it more than anything in the world!

Finally, Undaunted Faith, book four:
It’s 1867 and school teacher, Bethany Stafford, travels to the along with Jake and Luke McCabe. But there’s trouble brewing in the town of and the last thing the McCabe brothers want is to get involved. Unfortunately, it’s too late!
All four books received 4-star reviews from Romantic Times and are available amazon.com.
You can also watch the exciting video trailer for Undaunted Faith, by clicking here.
So what’s ahead for me?
I’m currently writing book 2 in my new historical romance series, Fabric of Time. I finished up book 1, Threads of Hope, and it’s slated to be released in January of 2012. I’m extremely excited about this new series because it takes place in – the state in which I was born and raised. It’s been fun to do the research – and quite convenient too, I must say. In the next couple of weeks I need to visit the Wisconsin Maritime Museum. Has anyone been there recently?
Well, that’s all about me. I look forward to getting to know both the readers and writers of this fabulous blog!
Posted by Andrea at 12:01 AM

Lovely introduction, Andrea. I'm grandma to six, so I can understand your pride and devotion to family. You've got a lot going on in your writing life, and I'm wishing you great success with that. Roses of Prose Rock!

Absolutely love the new look! Your books look great! I have never been to Wisconsin, but hear its beautiful. I'm a history fanatic myself. Can't wait to get to know you better!

Hi Andrea,
A very nice introduction. Grandma of six and twenty five novles. Wow, where do you get the time. Even though I am an Aussie, I love the American Civil war, era and you can thank Gone With the Wind for that. You series sounds absolutely marvelous. Being an historical romance author myself, I know it can be a hard genre to write, but I love it, as you obviously do.

Congrats on all those books, Andrea! I, too, love the Civil War era. Your books look fascinating!

Okay, what's going on? I posted ages ago and came back to check in and no me! Great post, Andrea.

Lovely to 'meet' you and your novels, Andrea - you're a busy lady, especially with those sweet grandbabies in the mix! Look forward to reading more from you.

I have the pleasure of teaching the Civil War to my students every year and it is an action- packed segment in our nation's history. Lovely to meet you, Andrea.

Andrea, I can imagine the plethora of history books you have access to through your father's library. It's great to read about your books, and I look forward to hearing more about you.