Which is a concept that got me thinking, and put me at a place where I wanted to write a normal romance. Not too much baggage, no dark secrets bogging the hero and heroine down, just an everyday experience.

So I did some more thinking, and used a bit of my former life experiences to put together an idea. I used to work for a gaming company, designing games. Let me tell you... people who love (truly love) computers are some of the most normal people you can find. Sometimes they can be flat-out boring. And, I don't know a computer gamer who isn't addicted to his or her work, to the point that the world can go by and they won't be aware until they're left looking after it.

Which took me to Mason, and my contemporary novella that releases TOMORROW! -- Misunderstanding Mason. 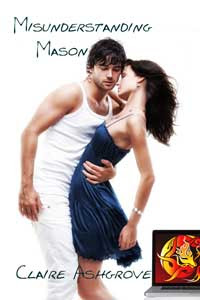 While Mason wouldn't be on the cover of Cosmopolitan or even Forbes, he's successful and respected in his own circle. Kirstin's always been behind her man, always seen the hero that her computer graphic designer man is.... Until... a little bit of real life gets in their way.

When Kirstin Jones agreed to work with her live-in boyfriend, Mason, on a free-lance job for a wealthy client, she never thought it might destroy their relationship. But the client’s keen observations show her that she’s been little more than Mason’s shadow. Fed up with his insensitivities, she moves out. Weeks later, desperate to stand on her own, she accepts work with the same client once again. Only this time, the project requires Mason’s help. To obtain his aid, she must meet his terms. And what he wants is more than she can afford

Mason Montgomery is baffled by Kirstin’s claims that he never had time for her. While verbalizing his emotions has never been his strong point, he’s spent five years showing his love. He needs Kirstin more than he wants to admit. When she leaves him, he’ll stop at nothing to get her back, even if it means working with the client who twisted truths and tore his life apart.

See you all next month!

Posted by Claire Ashgrove at 12:01 AM

Hi Clare,
It's so true that romance knows no bounds. Congratulations on the release of Misunderstanding Mason!

Claire, I love stories about everyday people. And I really love your cover. Very enticing. Good luck on the release.

Simple characters with believable problems are much easier to relate to. Who can't sympathize with a guy who's bad had expressing himself? Are there any out there who are good at it?

A new release! How exciting! I'm hoping you have great sales and lovely reviews. Yes, romance is important to our lives. Granted we can live without it; I did for ten years. To a degree I was happy. But not as happy as I am when there's a man in my corner, cheering me on, and giving me such mar-r-r-velous hugs. **wink**

Don't forget, if you need a place to blog, Vintage Vonnie is always available.

Hi Claire,
So true. I do have a soft spot for "computer geeks" for want of a better description, and just because they play with a computer doesn't mean they are any less of a man than some of the more in your face, macho types.

This love story that you’re writing about is simple, yet very realistic. The fact that it is simple makes it that much easier to relate to. I think the lesson behind it is that love doesn’t have to be complicated or exaggerated to work. Kirstin is a great character because she fills that “strong, independent woman who doesn’t need no man” role without exaggerating. Mason’s misunderstanding of Kirstin’s needs is something that exists in all relationships. This is why the story is so realistic, and why I think this book will be a really good read.