Undead For The Holidays Part 2 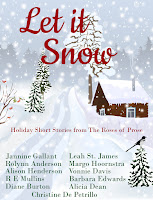 "I was passing through town, of course, I decided to drive around the square." I shrug like it's no big deal. "It was great to see Samantha’s Gifts still in business.”

Sorry for the temporary glitch. Everything seems back up and running. Please, leave me a comment. Thanks, RE

I'm enjoying this so much, Robin! And it's turning out just as I suspected!

Though not a vampire fan by nature, I'm thoroughly enjoying this story. Good, bad or otherwise, Wills is a keeper for sure. Something tells me Holly needs him in her life. It is a life, right?

Margo, every paranormal author creates their own vampire world. Mine happens to be filled with very 'human' vampires. Think of them as humans with an extra chromosome or two that provides their increased senses and lifespan. Due to their long lives, I've also made them mature much more slowly. In my vampire series, they don't even reach their majority until they reach 100 years.

I love your version of vampires! Just a heightened form of the human race. Sort of. I hope that means they can eat real food. :-) As far as yesterday's chapter, I had it partially right. I guessed correctly about Will, but not that holly was turning!! Can't wait to read tomorrow's conclusion!

Ah, fabulous! I love that she's transitioning and he's there to help her. This is a great little story! Off to read the conclusion.