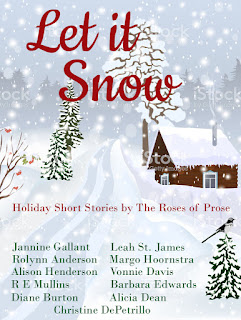 Jim squeezed Mariana’s hand, but he looked at Nate. “I guess you’d better tell us.”

“I called Grandma Thacker last night.” Shame colored his neck red, and he looked younger than fourteen. More like a six-year-old admitting he sneaked cookies after she’d gone to bed.

Nate immediately went on the defensive. “Mom, you were so upset and crying and I was mad that we had to leave home and . . . and I yelled at her, told her we didn’t want to come because she hated us—you and me—and it was all her fault that our car got wrecked and you were hurt. And . . .” He ran out of breath, dropped the attitude, and sheepishly examined his feet.

“Oh, Nate.” She jumped up and grabbed her son’s shoulders. “That was very bad. How could you? She just had a heart attack.”

Jim rose a lot slower. “Not so much bad as . . . thoughtless. I understand that you were defending your mother. I appreciate that. And so does she. But yelling at an old woman was probably not the best way to handle the situation.”

Mariana and Nate stared at him askance. He should’ve yelled at Nate. Or blamed her for raising such an inconsiderate kid. Oh, dear Lord, what if her son’s tirade put his mother back in the hospital? Gave her another heart attack? Yet, Jim calmly patted Nate’s shoulder and said it wasn’t the best way to defend her? The man was a saint. A real, live saint.

Nate threw himself against Jim. “I am so sorry. I shouldn’t have done it.”

Jim held the sobbing teen, the same way he’d held her. “It’s not the end of the world. I’ll call my mother and smooth things over.” He held Nate, patting the boy’s shoulder as he blubbered. “Between you and your mother, I won’t have a dry shirt left.”

“Excuse me, folks?” Cora entered the sitting room. “You have a visitor. Is it okay if I let her in?”

A visitor? Mariana had a terrible feeling about that.

“Mother? What are you doing here?” Jim rushed to the doorway and drew his tiny mother in, while the innkeeper backed away. “Sit down. Don’t tell me you drove from Chicago.”

She sat on the edge of the settee. “Of course not. My driver did. Young man—” She stared pointedly at Nate. “—I will talk to you later. Jim, take the boy out to the kitchen. I believe I smell Christmas cookies. I would like to talk to Mariana.”

Mariana panicked. She glanced at Jim then squared her shoulders. She would handle this, if only to save her son from a scolding. He needed one, that was for sure. But this little woman, in her elegant wool pants suit and velvet cloche that perched right on her perfectly-coifed hair, wasn’t going to do it for her.

“Sit, Mariana.” Jim’s mother, her voice softened, patted the place next to her. “I’m afraid there’s been a misunderstanding between us.”

Where had that conciliatory tone come from? And the sadness in her blue eyes, identical to her son’s. Reluctantly, Mariana sat on the edge of the settee. Though mere inches separated her from her mother-in-law, the gulf was wider than the Mississippi.

“I want to apologize for the impressions I have given you. My daughters, also. What was intended as concern over Jim’s marriage apparently was perceived as disapproval.”

And it wasn’t? Mariana tightened her jaw so she wouldn’t blurt out the words.

“In the hospital, I had time to examine my life, my priorities.” She reached across the space and took Mariana’s hand. “You have made Jim very happy. I’ve never seen him smile as much as he has in the past three years. After his father passed, he acted more serious than he’s ever been, shouldering responsibilities for his sisters and me. Since he met you, he’s happy.”

Mariana’s stiffened. No way was this woman going to take it out on Nate. “Ma’am—”

She patted Mariana’s hand but didn’t release it. “I recognized your need to defend your cub. Don’t. He did nothing wrong. He made me aware of the problem between us.”

Another hand pat. “This is very difficult for me, so please let me finish. I admit I questioned my son moving out to a farm and telecommuting instead of staying in the city to handle his father’s investments. As I said, he is happy. And that’s all a mother wants for her children. As for my daughters.” She sighed. “They will treat you properly from now on, and with respect. We all will. I am sorry it took an accident, your being hurt, and a young man’s determination to make us realize our shortcomings.”

A stunned Mariana didn’t know how to respond.

Jim’s mother reached up and turned Mariana’s chin. “Oh, my. I’m afraid you will have two beautiful shiners for Christmas. If anyone says anything, just tell them they should see the other guy.” A small smile, one so like her son’s, curved her lips.

“That’s what Jim said this morning.” She squeezed the older woman’s fingers.

“Smart man. But of course, he’s my son.” The smile grew. “You are such a strong woman, Mariana. I admire that. Raising a child by yourself, managing a large farm, and teaching agri-business at the community college is nothing short of amazing. I’m ashamed to say I felt intimidated by you and your accomplishments. Susan and Amelia admitted they are, too.”

They were intimidated by her? Holy cow!

“Do you think you could call me Grace? I would not expect you to call me Mother. But Mrs. Thacker sounds too formal.” This time, she gave Mariana a tentative smile before standing, finally releasing Mariana’s hand.

“Grace, I had no idea. I apologize for my son’s call. He should never—”

“He has initiative. And his defense of you is admirable. You should be proud of him.”

“I am. But he should not have upset you.”

Grace waved that aside. “Let’s find those two boys and hope they haven’t eaten all the cookies. Then, we will get this show on the road, as my father used to say. Mr. Willow promises to take care of your vehicle, which you can pick up on your way home. The girls are preparing a Christmas dinner that will knock our socks off. Or so they say.”

With her arm linked through Mariana’s, Grace led her into the kitchen. A few cookies remained on the plate in the middle of the table. While Grace munched on one, Mariana realized how difficult this visit must have been for her. To admit her failure to welcome Mariana and to take on responsibility for her daughter’s attitude, too, made Mariana regard her with respect.

How fortunate she was. With two men in her life to love her, she could open her mind and heart to accept his family the way they were. Different from her, yes, but united in their love for Jim, they accepted her the way she was.

Instead of the worst Christmas, this one was going down in her book as the most amazing.

Wishing you all a great holiday season. Come back tomorrow for Vonnie Davis’s “A Beary Merry Christmas.”

I stayed up late just to see what Nathan had done. You and your cliff-hangers. You had me wrapped around your little writing finger. LOL I didn't expect this. What a neat, neat story. Well done, you.

Nice. A truly happy ending. That Jim is something else. Lucky Mariana. And Nate.

LOL, Vonnie. If you're tired this morning, don't blame me. Glad you enjoyed the story.

A very sweet holiday story. Thanks

Grace...has some, it turns out. Ho, ho, ho! Nothing like a life threatening illness to teach a lesson or two. Good job with Beta Jim...he's a keeper. Now we have to work on Mariana's self esteem, right? Well done, Diane!

Rolynn, you're right. Mariana does need to work on her self-esteem.

A complete surprise and a happy ending! Wonderful story, Diane.

I feel as if I've been virtually hugged! Beautiful story!

I love this ending!! So sweet. I want to read what happens next on Christmas day, show the sisters act...all of it. Great ending, Diane.

Thanks, Alison. Glad I surprised you.

Thanks so much, Christine.

Thanks, Leah. I guess I'll have to develop this into a longer story, huh?

What looks/sounds uppity can be masking insecurity. Glad you enjoyed the story, Brenda.

Wow...this is fantastic!!! Great turnabout. I guess the ornery Nate knew what he was doing. :) What a heartwarming, lovely story for Christmas!