Christmas at Sinners Part 3 of 3 by Rolynn Anderson 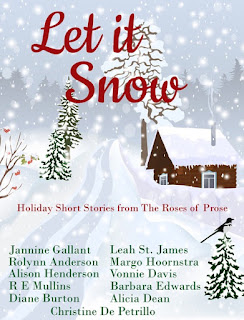 Sable cocked her fist at Mitch's suggestion about the bed, but decided to treat his comment as a joke. She could use some back-up to collar two criminals, and this guy had the build of a wrestler. His blurt about the sister's medical bills gave her pause, but his strategy for vetting the guys in the bar made sense. What she didn't understand was the sadness she saw in his eyes when she smiled at him and the distance he kept between them.

Mitch’s eyebrows were up, waiting for her answer.

A throat clear. “We’ll try your way, Mitch. Don’t know if you can detect an eye-twitch from your position, but maybe you can watch for other tells.”

“I want you to come over and put your arm around me to show the guys I tried to worm a room out of you, regretful you didn't have one to give.”

“O...okay.” He rose from his stool and gave her a quick side hug before he moved away. His expression was wistful when he said, “I like you Sable Chisholm and you smell good. Don’t forget to smile. Big. They’ll do anything for you when you smile.”

Sable surveyed the bar, wondering where to start. Something about the guy smack in the middle, head down like he was drunk, but neck held too stiffly to signal inebriation, drew her. Another man, black hair and mustache, staring into space, sat at the same table. The vast distance between them clarified they weren’t mates.

She graced them with a small smile. “Gentlemen, may I sit for a moment?”

The pretend-drunk shot her a side look, his alertness no surprise. He was a broad-shouldered fellow, square-jawed, dark brown eyebrow shooting up to his short brown hair. A good haircut. Jeans and a jeans jacket. Shirt looked tailored. Did his eye just twitch? Was he medium height? She couldn’t tell.

The mustached guy said “Take a load off,” so she stuck out her hand. “Thanks,” she said, sitting. “Sable. I won’t take much of your time. Promise.” Sable worked on a grin until their eyes focused on her. "Names?"

“Ken.” The mustached guy squirmed in his seat.

“Tough we have to spend Christmas Eve here when we should be with our families."

Ken stroked the hair under his lip. "We’re stuck, for sure. Buy you a drink, ma’am?” The man dipped into his pocket and pulled out a wad of bills. “Name your poison.”

When she waived off the offer, Ken said, “Snow’s stopped. Storm’s over.”

“How did you learn that? The internet’s down.”

“But they’re out of rooms.” Sable said plaintively. “Are you guys going to sleep in this bar tonight?”

Burke scoffed. “Not me. I bought a room off that guy over there." He pointed to the far left of the bar. "And I’m about to crash. You looking for a sleeping partner tonight, ma’am? Why don’t I buy a bottle of champagne and we can retire to my place.” He lifted his eyebrows suggestively.

Sable ignored his offer. “I heard the road’s closed at Rainier because of snow. Customers are stranded up there.”

“Hell of a bad stretch. Those folks at Rainier won’t get out of there for days.” Burke smiled as he fingered a hundred dollar bill. “Now about that bottle of champagne?”

She waved away his offer a second time and zeroed in on Ken. “Do you have a room I could buy from you, sir? You look like you’d prefer to spend the night out here, anyway.”

Ken shook his head. “No room at Sinners for me.”

Frowning, Sable stared at Ken’s finger, the one he used to rub his forehead. She stood and walked over to the man. “Sir, you’ve cut yourself on your cheek. Right here.” She swiped her thumb on the place. With a quick pivot, she turned to Mitch, and hidden from the Ken’s view, she showed her finger.

Mitch jumped off the bar stool and approached the table. “Am I hearing a ‘ho, ho, ho’ from over here, Miss Sable? Did you find a room?”

She walked behind Burke, put her hands on his shoulder, and bent her head close to his. “Looks like you’re about to gift me with your bed for the night.”

The man leaned back to take advantage of her caress. In the next second, he jerked up and yelled, “What the hell?”

Sable held the gun she’d taken from Burke’s belt, dangling it by one finger to save fingerprints, and setting it on the floor well away from the table. She flipped a nylon tie out of her pocket and had him cuffed before he could stand. The pressure she applied to the back of his neck immobilized him. He groaned in pain.

“Mitch, come over here, will you?”

With a puzzled look, he approached Sable.

"You’re bleeding on your nose, my friend.” She reached out and swooped her thumb over the spot and examined her finger. Sable turned to Ken and asked, “You on the job?”

The man’s shocked expression was almost comical. She smiled. “See this finger. Make-up. Got cuffs?”

She watched as Ken finished cuffing Mitch. “Your second mistake was giving me the make-up and disguise idea.” Another tsk. “Using me to find you a tow or a place to hide until morning, wasn't the smartest, either.”

When she surveyed the bar, few customers seemed interested in the arrests. Too many troubles of their own. She winked at Ken, all six foot five feet of him. Definitely not drunk. Definitely interesting. “We’ve got a room, partner. Mr. Mustache shelled out big bucks to procure one for our benefit. I’ll report in, and we’ll take these bastards to the room, tie them up tightly and get some sleep. We’re about to make the local cops and Rainier’s rangers very happy because they can go home to enjoy Christmas Eve.”

Ken glanced at Burke, then at Mitch. “I thought the mustached guy was my man.”

“Nope. He bought a room from a guy in the bar, which seemed like the action of someone newly wealthy. Plus, my smile dazzled him and he straightened up in the chair. At my refusal to go to bed with him, he slumped over and I saw his jacket catch on his gun.”

Spike lumbered over to their table with a key card and a Buddha smile. “Chisholm, I watched you in action and I have to admit I’ve never seen a smoother operation, with not one bit of damage done to my bar. Here’s the key to his room. I’m having two steak dinners and a bottle of wine delivered. I know a professional when I see her.”

As the big guy spoke to the bartender, Sable cast a sympathetic look toward Mitch. “In the spirit of Christmas, I'll mention in my report you surrendered peacefully.”

She put more of her weight on the back of her collar and spoke to Ken. “So we’ve opened two big gifts this Christmas Eve. I've risen a notch or two in the eyes of my colleagues; you’ve earned a bounty.”

“You realize we’ll have to spell each other all night so these two don’t rabbit on us.”

Ken clicked his tongue. “It’s not perfect, this Christmas Eve at Sinners. A ranger and a bounty hunter, spending the night with two thugs.”

Sable smiled big at Spike. He rolled his eyes and stalked to the front room, returning with the goofy tree. When he handed it to Sable, she thanked him.

To the room of men, now alert and watching her, she raised the blinking tree. “Merry Christmas, everyone.” 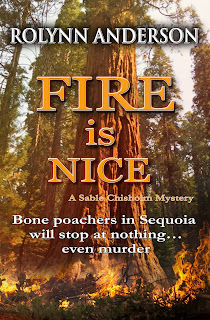 Thanks for reading my story. Sable Chisholm is the main character of my mystery series, kicked off with FIRE IS NICE, now in pre-order. Save a dollar on this e-book until its release Dec. 4.

A great ending to your story. You "tied" everything up nicely, Christmas tree and all.

Thanks, Vonnie. I've learned from y'all...every detail counts...and villains have hearts, too.

I was beginning to wonder if Mitch would be the twist. Terrific story, Rolynn!

Good ending. Sable is something else.

Alicia, thanks. I aim to surprise...and I love the wrap-up...hoping that in life we get those, too!

Margo, you are right...Sable is a handful. She's both difficult and fun to write about...I've definitely met my match!

Wow, what a twist! That has got to be the most unusual and original holiday story I've ever read.

Great twist. Loved the ending, everything nicely tied up. You done good!

Alison, music to my ears! I strive for unique! My first go-around wasn't special...I rewrote the damn thing to give you the twist you deserve!

So glad I surprised you, Christine. My Sable is one clever gal...a lot quicker than I am! :-)

Diane, you are so kind. 'Done good' makes me happy!

What a great twist. Truly enjoyed!

Thanks, Brenda. We girls gotta have fun...and like surprises!

Wow, what a twist, Rolynn, and a fantastic story! Great character. I'm going to check out FIRE IS NICE. :-)