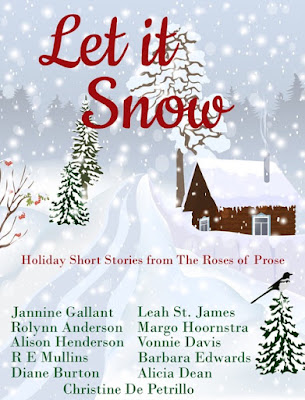 After struggling to open both doors, Danner accepted she’d have to crawl out of the car’s window to go for help. She struggled and wiggled to make her escape, falling face first into the snow. When she landed, she cut the edge of her hand on a jagged rock buried beneath.
The unscheduled snow gymnastics caused her knit cap to blow away before she could snatch it. She grabbed for a pine branch to keep from sliding down the side of the mountain and gasped when the rough needles upbraided the inflamed skin around the cut. Scarlet drops colored the snow. Needing to move higher, Danner reached for a boulder and used it to aid in her climb upward. It made the most sense to head where she’d been. There was a road there and an inn where she could ask for help—in the warm.
Wind whipped the snowflakes around her. Snow fell down the back of her coat and her sneakers were caked with it.

Good Lord, my teeth are chattering.
A bare branch was a foot beyond her reach, and she toed her way toward it--inch by frigid inch. She stretched and strained to grab it. The dead wood gave way and she tumbled down the steep hill, crying out in pain as her back hit the demolished car with a thud. She took a couple of deep breaths to see if she’d cracked any ribs.
When no pain caused her to gasp, she brushed snow from her face and wished again she’d gotten gloves yesterday at the little shop where she’d bought a scarf.

She’d been so pleased to find her ancestors’ tartan—a pretty sky blue, celery green, and a marine blue weave. There were no matching gloves in stock. Today her hands were paying for the exposure. Her toes were stiff. Yeah, she could use a pair of those fur-lined boots so many women wore in the Highlands.
She rose to her hands and knees—and came face-to-face with a bear.
Oh, dear God!
She froze. So did her heart. It was no use to scream. Who would hear her out here?
The bear plopped onto its bottom as if to get a better view of her. She gaped. The beast had a wedding band on one of its digits just behind its long, black claw. Had it belonged to a previous victim?

To her astonishment, the beast’s dark eyes bore kindness as it tilted its head to study her. That’s when she noticed a small gold hoop in its ear.
This was beyond bizarre. She had to be hallucinating. Really, what kind of bear wore jewelry? What did the carnivoran mammal do? Lumber into Zales and pick out some golden adornments? Where would he keep his credit card--in its fat folds?
In the face of certain death, her mind must have slipped into the realm of insanity. Just as well; maybe she wouldn’t feel the pain when the bear tore her apart. She stood to face the inevitable and prayed it would be quick.
In like manner, the bear stood on its hind legs, towering over her. With gentle movements it brushed the snow from her coat. She trembled at its touch waiting for his claws to rip her to shreds.

Steady, man, ye need ta think on something else a'fore yer kilt tents.
“Are ye hurt anywhere else, Danner? Do ye need some ibuprofen?”
“That might help my headache. I’m sure I’ll be a mass of bruises tomorrow but for now the only pain I feel are in my head and hand.”
“Be right back with the pills.” He retrieved a bottle of extra-strength pain relievers and a class of water. On impulse, he poured himself a squat tumbler of whisky. Her appearance at his place had shaken him more than he cared to admit. What had possessed Bear to bring him a woman?
Once she took the pills, he sat on the coffee table again and sipped the whisky, its burn traveling down his chest to extinguish his own discomfort. Setting it aside, he opened the first aid kit. “Now, let’s get that hand taken care of. Is there anyone ye want to call to let them ken ye’re okay? I have a cell if ye have need of it.”
“No. There’s no one I need to call.”
He examined the depth of the cut. “Nae husband, Danner?”
“Not anymore. I’m divorced.”
Her confession pleased him and he stilled for a few seconds to absorb the feeling. She had the softest skin; it was almost pearlescent, glowing in the firelight. Peroxide bubbled when he poured it over the open wound. He wiped it off with gauze and squeezed antibiotic cream over the gash. Three butterflies held the swollen edges of her hand together before he wrapped a bandage around her hand.
Just because he could, he brought it to his lips and kissed the pressure point at her wrist. Her heartbeat fluttered against his lips.
“There. A kiss for yer boo-boo. Do ye use that term in America?” He feathered a second kiss to her wrist before he lifted his head to gauge her reaction. Her perfect lips were shaped into an “O” and a beautiful blush fanned across her cheeks.
She cleared her throat. “Y … yes, we do kiss boo-boos, although it’s been years since I’ve been the beneficiary of such tenderness.”
A burst of protectiveness and, aye, anger surged through him. “What kind of milksop were ye married to, Danner? Didna he treasure ye? Protect ye?”
“No.” She brought the mug to her lips and gulped her drink. Then, flog him blind, she slowly licked the whipped cream off her upper lip.
He watched the movement of her tongue and damn near groaned. There was a wee mole next to her upper lip that fascinated him. His own tongue brushed against the back of his two front teeth as it mimicked what he’d like to do to that small mole and her luscious looking lips.
“What about you, Hughen? Are you married?”
“I lost me wife nearly two years ago.” To his surprise no pang of pain seized his heart at the mention of his loss. He’d mourned with every cell in his dual persona for his childhood sweetheart. Some claimed he’d mourned to excess, but he was a man who loved hard.
See? Yer new mate is healing ye already. ‘Tis time ye moved on, Hugh. Ye need someone to love.
He was a jumble of emotions. Unexpected desire for this strange woman warred with the memory of the only love he’d ever ken.
“So you live here alone?” Danner glanced around the great room.
“Aye, I do. Me two brothers and their families live on the other side of the hill. After Kaylee died, I sold our house in Mathe Bay and threw me energies into building this cabin. I wasna fit for civilization for a year after a sudden, murderous brain embolism took her. She was on her way home with a pregnancy test tucked in her purse.”
“Oh, how sad. I’m sorry for your loss. That must have been devastating.” Her eyes glistened with tears. “I can’t imagine that kind of deep pain.” Her tender heart was evident. “I went through a lot of pain, too, but nothing compared to yours. I lost both my husband and a close friend thanks to their affair. They’re getting married tonight. A romantic Christmas Eve wedding.”
Her voice carried a lot of pain and he understood. “Is that why ye came to Scotland from the States? Ye’re American, right?” A bloody beautiful American.
“Yes. I’m from Las Vegas. I teach biology at the University of Nevada.”
He laughed and she scowled at his behavior. “Danner, ye’ll never believe this. I’m a chemistry professor at Highlands College. How bizarre is that? Statistically, what are the chances?”
See, Hugh? I told ye she was perfect for ye. Now, claim her and show her what chemistry a Scot can ignite.. 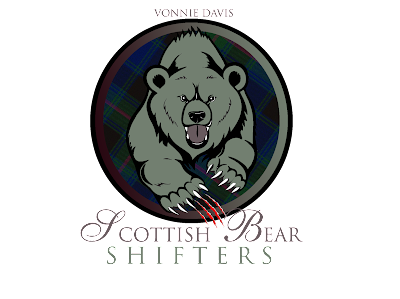 Come back tomorrow for the final chapter of "A Beary Merry Christmas."

Santa Baby. Fantasy kingdom. Oh, Vonnie. Luckily I wasn’t drinking coffee at the time or I’d have to go change my clothes. Will definitely be back tomorrow. Have a great day.

If I made you chuckle, then my writing goal is completed. Thanks, Margo.

Warmth...and lots of it I'm thinkin'...hearts warming to each other, a fire, hot chocolate, a wool blanket. I'm carrying a fire extinguisher when I read tomorrow. We're talking a'blaze! Looking forward!

Woo! Yeah, baby, on with the chemistry.

Love it! I can definitely feel the chemistry brewing, and I appreciate the morning chuckle. Looking forward to Part 3!

Rolynn, it's hard to get to a blaze in 3 chapters. Right. Right? Och, ye ken what I'm talking aboot. I'm reading a cozy mystery right now set in Edinburgh. The author concentrates on different words to weave in the Scottish brogue. Aboot, being one. But a fire extinguisher couldna hurt. LOL

Glad to see you back, Brenda. I wasn't sure if a paranormal would suit this crowd. Not everyone likes shifters.

Thanks, Alicia. I'm thrilled you're enjoying the read.

I'm fascinated by Hughen's inner bear. I can't wait to see how you wrap this up tomorrow!

Yeah, if you or I were in her spot how would we handle a shifter? I'd be so out of there...snow, or not. Can Hughen keep half of his identity a secret? Would this man of character do that? How much of himself can he expose? He'd kind of like to keep this intelligent woman around. What to do? What to do?

This is so much fun--funny and sweet. I laughed out loud at the vision of a bear lumbering into Zales.

How else would he have gotten jewelry. Imagine one bear piercing another's ears. Or maybe the fox jammed the needle in. ONe's mind can run amuck at all the possibilities.

In love and wanting a beary bear for myself.

Bear shifters are amazing. Real bears in the wild, not so much. Thanks, RE Mullins.

Love "Santa Baby". LOL And the bear going into Zales for jewelry. Vonnie, you always weave in such fun. The bear has good advice. Will Hughen heed it? I hope so. Can't wait for tomorrow.

Almost makes getting into a car accident worth it, right? Love it!

Chele, how nice of you to stop by and leave a comment. As always...Muah!

You crack me up, Vonnie...hiding a credit card in his fat folds. :-) And what a guy. I think even I might enjoy a bit of snowy weather with this guy. Can't wait to read the conclusion!

Diane, I hope the finale is worth the wait. Thanks for your kind comments.

I've been in enough car accidents, Christine. I'll chose another way to meet my shifter. LOL

Leah, haven't you ever slipped change in your bra if you're in too much of a hurry to retrieve your purse from your wallet? I knew Bear wouldn't be wearing a bra, but hey, he'd have fat folds. Don't tell me I'm the only one who thinks like this. LOL

Uh...no. :-) I usually just dump it into the quagmire that is my purse.

You deserve a hug for that, Leah. Bwahahaha. I just love ya ta bits.