Once Upon a Brave Christmas by Alicia Dean ~ Part 3, Conclusion 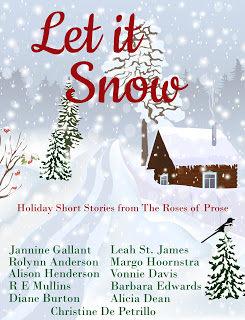 Thank you for reading my contribution to our Christmas stories.
Please follow me on Amazon and Facebook. And, please sign up for my newsletter, where I give away a $25 gift card each month.
Amazon
Facebook
Newsletter

Be sure to stay tuned for tomorrow's Christmas Free Read by the wonderful Barbara Edwards...
Merry Christmas!

What a great ending! I loved it. I think she chose wisely. Now, an hour more of writing and then I'm going to bed. I'll think of your ending as I drift off.

Lovely ending! I think they both chose wisely...although what will she do without her cell phone?!?! :-) (I panic when I leave my phone home, then remember I spent a whole bunch of years without one--and survived!) I'd love to read a sequel, maybe 50 years from now. Great story, Ally.

Great ending, Ally. I wanted him to go into the future with her so they could see how John & Dorothy ended up. Oh, well... She's going to have a hard time not sharing what she knows. I would. LOL

Well that was certainly satisfying. Ina heavy sigh and contented smile kind of way. So happy for all of them. And they get to watch Elvis rise to stardom together. Merry Christmas, Ally.

Would I go back to the 50's and live those decades all over again? Even for love? That's a tough question. Nicely done.

Terrific ending. I kind of like the idea of them going back and forth through time, checking things out. I wonder if they did.

I loved your story! And I can so see you wanting to live in the 50's, Ally, and see Elvis perform during his prime!

Way to bring some warmth to the 50's! I'm with Alison...I like the back and forth...if possible. Thanks for a great time travel story for Christmas!

Perfect ending!
Thanks.
Good luck and God's blessings and MERRY CHRISTMAS to Each and Every One of YOU!
PamT

Wonderful ending! The 50s are definitely preferable to 2018! Loved this story!

Aw, thanks, Vonnie. So glad you enjoyed it. Hope you got some writing done and slept well. :)

LOL, yes, Leah, I'm sure that will take some getting used to. I do the same, I feel lost without my cell. :) Thank you, so glad you enjoyed it.

Thank you, Margo...I am glad you found it satisfying. Yes, I know. I always wished I was a teen when Elvis burst on the scene. I missed it by twenty years, I guess.

Thank you, Diane. Yes, but this way, they get to watch what happens with Dorothy and John as it unfolds. And, there was still a chance they'd decide to go to 2018, who knows? Hopefully, she's a better person than I am, because i would NOT be able to keep my mouth shut. Or refrain from placing bets. :)

RE, I would jump at the chance to go back to the fifties, to each her own I guess. :) Thank you so much!

Alison, that's what I felt they'd do. I figure they had a long discussion about whether to visit 2018, and if they'd take the risk of having to stay there. It was fun creating this story, so glad you enjoyed it.

Yes, indeed, Jannine. I'd have been one of those screaming teens pulling at my hair and fainting. :) (Actually, I WAS a screaming teen at 3 of his concerts, it was just 20 years later). Thank you, I'm glad you enjoyed it!

You're welcome, Rolyn, and thank you! I like the back and forth idea too, that's what I picture happening. :)

Thank you so much, Pamela. I'm glad you liked the story and the ending. Merry Christmas and God bless to you!

Thank you so much, Christine. I'm happy you enjoyed it. Yes, I agree, they are preferable to me too. :)

Loved the ending. I like the compromise they made. I want to see more, to know what they eventually decide, and if Neil can go through time with her. Thanks for a great read!

Thank you, Cara. I appreciate the kind words so much. I like the idea of expanding it a bit. I might do that. :)

Aww, thank you, Darcy. Merry Christmas to you!

Solstice and Christmas stole my time (in a good way) so just now catching up. Great ending!