WILDE ONE ~ Making Its Debut! by Jannine Gallant 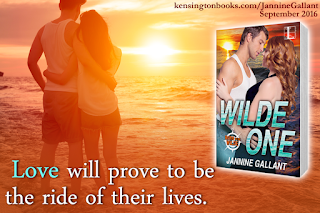 Sometimes I think we write our books and then practically forget what they're about by the time release day rolls around. At this point, I've finished all four books in my Born To Be Wilde series, and I'm hard at work on book one in a new series. So, finding excerpts to post on blogs became a bit of an effort. Back when I was working on edits for Wilde One and thinking to myself, "Gee, this would be a terrific scene to use for promotion!" I should have had the foresight to actually write it down. Alas, I'm afraid I'm not that organized. On the upside, now I have the job of scrolling through my book, hunting for enticing scenes. And guess what? I actually still like my book! Always a positive when I recall never wanting to see it again after my final round of edits...

So, I picked out an excerpt I hope you'll enjoy. Griff and Ainslee have had a fight, and it's makeup time...sort of. Tell me what you think. If you're an author, do you have the same memory lapse issues I do? Or is that just me...

He tugged her closer, close enough to smell the floral scent of her shampoo. Close enough to want to do more than run his thumbs up and down the smooth skin of her arms. “Hey, it works both ways, you know. If you ditch me, I’m not going to be too happy, either.”
“Somehow, I don’t think you’d lose a lot of sleep over it.”
“Then you’d be wrong. I lied earlier. I’m half dead on my feet from staying awake all night after our fight. Still, I’d rather be here with you than getting eight solid hours in a room full of Gage’s trophies.”
She smiled. “Peyton’s trophies.”
“Whoever. The point is, I like hanging out with you.” Another tug brought her up against his chest. “I like kissing you even more.” Cupping her face in his hands, he lowered his mouth to hers. The kiss warmed him clear to his bare toes. When she responded with enthusiasm, including tongue, the warmth increased to a slow burn.
“Griff?”
He kissed her again then ran his lips along the side of her jaw. “Hmm?”
“We’re making out in a field full of cow pies.” Her breath came in a gasp as he licked her ear. “You know this isn’t going any further, right?”
“I don’t care. I’m good with just holding you. It isn’t always about sex.”
“Speak for yourself.”
He threw back his head on a laugh just as something whizzed past his cheek to hit the fencepost with a hard thud.
Grabbing Ainslee, he threw her to the ground and dropped on top of her. The flashlight flew out of her hand and landed with a thump before going out. From somewhere nearby Rocky yelped.
“Griff?”
“Son of a bitch!”
“What happened?” Her voice was a squeak.
“Someone shot at us. Again.”

Thanks for reading. For more information on my books, visit my website. You can get your copy of Wilde One at Amazon, Barnes & Noble, Apple, or KOBO. Happy reading!
Posted by Jannine Gallant at 12:01 AM

Email ThisBlogThis!Share to TwitterShare to FacebookShare to Pinterest
Labels: Born To Be Wilde, Jannine Gallant, new release, The Roses of Prose Where Romance is Never Out of Season, Wilde One

Uh-huh. I remember that scene. Very nice. I'm like you with promo. Maybe someday I'll write down those flashes of inspiration. Someday..... Best of luck with your latest!

Awesome excerpt. Just awesome! I can't wait for it to land in my Kindle. Good luck with your sales.

Thanks, Margo. Yeah, we should all be so organized...

Glad you enjoyed the excerpt, Vonnie. Wilde One is out now. Then Book Two comes out the end of October. Back to back promo. Sigh.

After wearing myself out digging holes yesterday, I treated myself with the first four chapters of Born To Be Wilde. Loving it - it's so much fun!

Good pick, Jannine. You've got some Vonnie-type humor going here...making out in the cow pies...very funny! Happy sales, my friend!

Thanks, Rolynn. I'll take Vonnie humor as a huge compliment!

Now I have to read this book. LOL Best wishes, Jannine. I know what you mean about not wanting to see the book after all the editing and proofing. But once it's been set aside, it's always fun to reread.

Then my excerpt has done it's job, Diane! Good to know. I haven't ever read one of my books after the final, final, final edit. More fun to read someone else's if I have free time.

Great excerpt, Jannine! I got my copy delivered from Amazon right on schedule and can't wait to start digging into it. Wishing you much continued success!

Thanks so much, Leah!

You got me, Jannine. I've enjoyed your books in the past so I'm sure I'll like this one too!

Thanks, Brenda. I hope so!

That's a great idea about marking scenes for later promotion. Love the excerpt.

Thanks, Robin, glad you liked it!