Surprise! #3.99 for my historical romances by Barbara Edwards

A big surprise for my followers! #3.99 for Another Love and Annie's Heart by Barbara Edwards

Even when you think things are set in cement, they can change. My first publisher changed their name from Wings Epress to Books by Wings epress. http://www.books-by-wings-epress.com Not a biggie you might say and you’d be wrong. Another publisher started using Wings e-press and people looking for Wings got confused and frustrated.
Changing the name involved a new website, a new venue for print books and re-listing all the books in their catalogue. it took time and a ton of effort. Wings has a new Facebook page, too.
https://www.facebook.com/Wingsbooks16/ where they display new books.

Another Love by Barbara Edwards 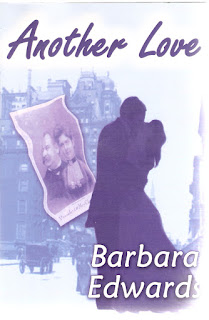 Some promises are made to be broken. Caught in a web of political intrigue, graft and threats to a beloved child, Meg Warren and Drew Larkin hunt the men threatening the downfall of President Cleveland and the economic fabric of America. From a poor farm to the ostentatious world of New York’s elite, they sift lies, discover trust and an attraction they cannot resist.

Some promises are made to be broken.


Caught in a web of political intrigue, graft and threats to a beloved child, Meg Warren and Drew Larkin hunt the men threatening the downfall of President Cleveland and the economic fabric of America. From a poor farm to the ostentatious world of New York’s elite, they sift lies, discover trust and an attraction they cannot resist. The last thing they expect to find is a love worth more than gold.
TRACE RANDOLPH has lost everything except his honor, so when a desperate ANNIE saves his life he knows he must pay his debt, even if it means marrying her. The only promise he makes is to leave before the winter snows. A promise he finds impossible to keep.

Looking at Another Love by Barbara Edwards at #smashwords https://www.smashwords.com/books/view/293526
"Quote." – Pat Potter, Award winning author calls Another love…“A real page turner with wonderful characters and a unique plot. You can’t miss with this one.”
Reviews from Romantic Times Magazine **** 1/2 (four and one-half stars)
Drew Larkin has fallen into the hands of his prey. When Meg Warren rescues him from the tumble he takes from his horse, she unwittingly provides the opportunity he needs to prove she is involved in the kidnapping of his nephew. The pretty Meg vows she knows of no plot to hold the boy ransom in exchange for a political favor, one that would force Drew's father to betray President Cleveland.
But she does have a secret. Never having the love of a family, she means to keep hers together. It is the only way to protect the brood of orphans she has adopted. She must resist the powerful feelings this stranger evokes at all costs. Drew is torn between his growing desire for Meg and loyalty to his family. How can they trust one another, despite their growing attraction?
ANOTHER LOVE is a story that is hard to put down. The characters are well-developed and the setting is vivid amidst a solid, balanced plot.
Excerpt:
June, 1893
North of New York City
"Ma, Ma," a high-pitched voice yelled. "He looks dead."
Andrew Larkin cursed as agony knifed up his thigh and threatened to split his skull, but he struggled onto his elbows. He squinted as an assortment of human shapes floated and danced before his blurred vision. Bright New England sunlight shattered into a rainbow of colors around a skinny young girl in a dark brown frock and wrinkled white pinafore. Her grimy fingers dug in the furry neck of the huge mongrel panting into Drew’s face. He inhaled the acrid odor of fresh manure from the nearby fields.
"I’m. Not. Dead." He said as a slender coverall-clad figure crouched in the road next to him. Urgency set his nerves to thrumming. President Cleveland couldn’t wait. He had to get moving. "Why don’t you help me back onto my horse, son? If your Ma gets here, I’ll let her take a look."
"I am Ma," she snapped impatiently as she jerked free the battered straw hat shading her face and settled back onto her bare heels. Shockingly thick auburn hair, fastened with a leather thong, tumbled down her back. Her face clearly showed her resentment at the way his gaze moved over the way her baggy overalls snugged her flared hips, clearly outlining her shapely derriere. A flush burned red flags on her cheeks. "Your leg is bleeding, mister, and…"
To his amazement, her fingers brushed like butterfly wings over his face and through his tumbled hair. He flinched when she probed a tender spot behind his ear.
"You took quite a wallop on the head. Hold still."
She wiped her perspiring brow with a sun-browned forearm, then pulled a worn jackknife from her hip pocket, flipped the blade open and calmly proceeded to cut away his bloodstained pant leg. The little girl whimpered.
"Don’t be afraid, Martha. He’ll be fine," Her cultured voice flowed over him like warm honey, soothing as a mother’s lullaby.
The child frowned, but her whimpers ceased.

Only two coins and a gold pendant heart separate widowed ANNIE MOSS from disaster. The fields need to be plowed, the barn repaired and food stored for the winter, but she is alone and afraid. Her dream of a home for her children hangs from the promise of a wandering man to keep moving on, a man she has no reason to trust.

Looking at Annie's Heart by Barbara Edwards at #smashwords https://www.smashwords.com/books/view/296872

Annie Moss buries her abusive husband with no regret, hoping desperately that she'll be able to keep the abandoned stage station as a home for herself and her two children.
On her way home, she find Trace Randolph, gunshot and unconscious. As he recovers, Trace helps Annie out, while reminding her that he must leave before winter comes.
The tremendous physical hardship that the country presents is as much a threat to their love as Annie's mistrust of men and Trace's reluctance to settle, Barbara Edwards creates a romance that proves life is about "surviving disaster. Growing back stronger," and most of all, the courage to love.
**** (four stars), Gerry Benninger, Romantic Times Magazine
Excerpt: Trace wiped his forehead with the back of his hand and hefted another bundle of shingles onto his shoulder. The sweat dripped off him and he knew he smelled like an old goat. He wondered if Annie had noticed, or if he were the only one suffering from this itch. His mouth was parched and he made a note to purchase more mints when he visited town. A blister burned on his heel. And work shoes. His high-heeled boots weren’t designed for doing farm chores.
He planned on taking a quick dip in the creek later to wash away his ripe odor. The scent of lavender, light and delicate as the woman herself, filled his head. Annie stood behind him. He turned. She smiled and held out a dripping glass of water. Nodding his thanks, he swallowed the drink with pleasure. He wiped his mouth with the back of his hand and her blue eyes flicked from his fingers to his mouth.
"When do you expect to be done?"
A longing to touch her seared him like a hot poker. Trace jerked his gaze from her mouth to eye the rising sun and gathering clouds. He gauged the daylight hours left.
"Maybe by tonight. It looks like rain, and I hope to have it completed so you won’t be inconvenienced again."
Her fingers trembled slightly when she held out her hand for the empty glass. His gaze darted to her face. She blushed at his bold stare and stepped back.
"I’m sure I never implied--"
"No, you didn’t, but I have eyes in my head. You need your privacy. I intend to get Digger’s bunk ready as well as my own."
She blushed a color reminiscent of the climbing roses in his mother’s garden. He realized she was embarrassed by his reference to sleeping arrangements. He was enchanted by her sweet reaction. A woman so innocent shouldn’t be the mother of two children.
Her gaze dropped to the ground as she hugged the glass to her breasts. The dripping condensation soaked into the fabric. She didn’t notice the wet material clinging to her soft outline, but he did. Heat pulsed low in his groin. He longed to trace the outline of dampness with his mouth.
"I need to go into town. Would you like to come?" Trace didn’t know where the suggestion sprang from, but Annie’s eyes sparkled with anticipation, then dimmed.
"But we have chores to…"
"Let Digger do them," he interrupted.
She hesitated. Cackling laughter followed by a whoop of excitement broke the silence stretching between them. Annie gave him a shaky nod before heading back toward the house.
Trace cursed under his breath as he watched the sweet sway of her hips when she climbed the shallow steps to the porch. Annie was soft and curvy in all the right places. She cast him a quick glance before darting inside.

Wonderful excerpts, Barbara! And congratulations on the fantastic reviews! I'm glad your publisher is working its way through the maze (or minefield!) of a name change.

Wow, love the excerpt. Kudos on the awesome reviews!! Changes with your publisher can be scary, but it looks like this will turn out fine.

I loved your excerpts. I was surprised to hear you also write historicals. Being versatile is an awesome thing. I'm always amazed at all the sub-genres of romance the Roses write. So glad you're excited about all the changes at your publishers. Looking at it with a positive attitude always helps.

Congrats on the change turning into a positive thing, Barb! Nice to hear something a little dicey worked out in the end!

Interesting and enjoyable excerpt. Great storylines as well. Congrats on the positive changes coming your way. Enjoy! (PS-I commented and posted it earlier today, but my words must be lost in the cosmos somewhere)

Thanks Leah. Can you see my blush at your compliment?

Hi Alicia,
It was scary.Wings was the third one I tried. the first two went under and gave me ulcers.

Hi Vonnie,
Thanks for the compliment. I have been holding back promo on these until their website was a go. I sometimes forget I write historical, too

Hi Jannine,
I'm wiping my brow and breathing out. It was stressful

Hi Margo,
Thanks for the compliments.

Great excerpts. I hope all goes well with your publisher. Changing so much must be difficult. Good luck to you.