I’ve written many contemporary romances, a few paranormals, some poetry, and nonfiction. My new series, The Shielded Series, is what I’m calling “low-fat sci-fi romance.” It has a contemporary feel with a few splashes of sci-fi to change things up a bit.

Let’s face it, the Star Trek version of the future is not going to happen within our lifetimes. I become more and more certain of this as time passes on and still no food replicators, no transporters, no Star Fleet Academy. Once in a great while I hear news of some amazing scientific discovery, but nothing that leads me to believe we’re on the cusp of meeting extraterrestrials or truly revolutionizing the way we live.

Hence the birth of my low-fat sci-fi romance—all the fun of pushing the technological envelope without the pesky, overly-intellectual scientific jargon. Happily ever afters, of course, are still guaranteed. 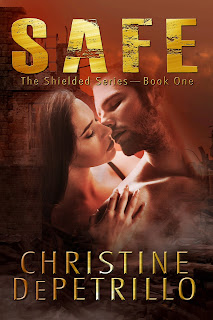 SAFE, Book One in The Shielded Series, takes place in the year 2025 and has hovercopters, genetically-engineered characters, a deadly plague, and a ruined global landscape thanks to science. Life isn’t easy for my main characters, but they’re doing the best they can considering the circumstances. They’re approachable too because the sci-fi parts are just a light frosting on the story. Not many calories at all. Easy to swallow and digest. No additional sit-ups required after consuming. Darina and Foster aren’t that much different from you and me of 2016. Their struggles are relatable even if they are living a few hops ahead on the timeline. Fears, pride, needs, desires—those don’t go away in the future.

To really dial back on the sci-fi, I gave the main character a wooded sanctuary where the living is about as natural as you can get. This serene setting balances out the gritty rubble of the decimated city. I give you equal doses of the hard, just-trying-to-make-it-through-the-day survival mode of Boston in 2025 and the take-a-deep-breath-of-mountain-fresh-air-and-hug-some-trees living of Vermont.

This all combines to give you a reading experience that stretches imagination, warms the heart, and gives us hope that things can work out even in the future.

Here’s a short excerpt to illustrate what I mean:

“Foster, c’mon. This roof isn’t going to hold much longer.” Darina took another step closer, wary of the gaping hole in the roof beside Foster. Heat and smoke poured from it as well as other places on the roof.
He reached forward and put his hand in hers. With a tug, she pulled him to his feet and they ran to the hovercopter.

She didn’t let go of his hand. Not when she climbed into the craft. Not when he climbed in right behind her. Not when they settled in their seats. Not when she signaled to Ghared to get the hell off that roof. The hovercopter ascended vertically, leaving Foster’s building a flaming beacon below them. Banking around the neighboring buildings, the craft jetted toward Emerge Tech’s walls.

Foster let go of her hand then to lean forward to Ghared. “Those walls have a security field above them.”

“Yeah, no shit.” Ghared shot him a sideways glance. “But I got in, didn’t I?” He reached over and smacked the leg of his copilot—Zeke.

Darina had been surprised to see Zeke in the hovercopter, but Ghared told her he hadn’t wanted to leave the kid behind so soon after a seizure. She immediately regretted calling her buddy for help, but he was the only one who could get them out of there in one piece.

She loved him for not leaving Zeke behind, even if the kid looked pale and groggy in his seat now. His dark mass of hair was sticking out at odd angles as if he’d been ripped out of a death-level slumber, which he no doubt had been. She fought the urge to pull Zeke into the back seat and into her lap, wanting nothing more than to comfort him.

Foster leaned back in his seat beside her. “Is our pilot’s confidence warranted, or should I be concerned?” He touched the gash on his forehead and frowned at the blood dotting his fingertips. He unzipped his pocket and extracted his tablet.

“I wouldn’t have called someone incompetent for help. I make a point of only associating with useful people,” Darina said, watching Foster power up his tablet and attempt—unsuccessfully—to doctor the gash in his forehead.

She slid closer to him and held out her hand for the tablet. After he slid it into her hand, she focused on lining up the injury in the tablet’s viewfinder. She absolutely did not notice how beautifully green his eyes were or how long his dark eyelashes were or how wonderfully that black stubble framed his tempting lips. She barely registered the artistic way his tattoo swirled up from his neck to his ear. Nope. Didn’t see a thing.

Grumbling to herself, she scanned his wound and it sealed itself. She reached under the pilot’s seat and grabbed a first aid kit, which no doubt was an antique to Foster. Rummaging around in it, she found a cleansing wipe and gave him one to wash the blood off his forehead.

As she stowed the first aid kit back under the pilot’s seat, she said, “You’ll live.”

“Thanks.” His voice also sounded as if he had tried—and failed—to not notice anything about her face as she’d tended to him.
So if you’re looking for something that has a contemporary flavor with a dash of science our time doesn’t quite have yet, try The Shielded Series. Darina and Foster are waiting for you in SAFE, Book One, and promise not to ruin your diet.

Low-fat sci-fi? Love it. Not to be sexist, but women (generally) don't want a lot of scientific detail. Guys do. We want relationships, along with the futuristic details. I'm still waiting for the transporter. It would be great to hop back & forth between MI & AZ so I could see my grandkiddies often. The food replicator would be great, too.

I love the idea of healing a cut with a swipe. Great for kids on the playground. Futuristic, but not by much. A great concept! Best of luck with sales.

Count me in too in loving this concept. May you have much success and prosper!

Chris, you have thought out your genre niche with great detail! Brilliant work. I like sci fi - light on the tech & heavy on the issues of what it means to human. Good luck with your series!

Yeah...what they all said! Love the low-fat concept. That's about my speed, although I too wouldn't mind a transporter!

Now, this is about as much sci-fi as I'd want. :) Sounds like a great read...very compelling and creative!