It’s the middle of September, and the Halloween decorations and costumes have been out in my town since the first week of August...a full MONTH before the kids went back school! When I was a kid, we wouldn’t even think about Halloween until October, or maybe mid-September. But in today’s world of super-rushed shopping seasons, it was apparently right on schedule.

Of course, being the media-savvy author that I am,  I took a shot with my phone and posted it to Twitter. My caption was something like “REALLY, Halloween??? The kids aren’t even in school yet!!” 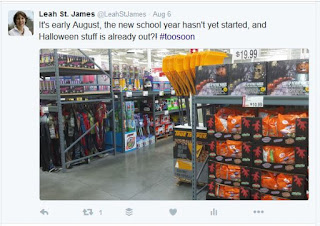 If I was expecting a flood of empathetic rage, I was deeply disappointed. No outrage by fellow Tweeters. Not a peep!

Then I realized why. The world is okay with this.

In fact, only a week later, someone else posted a photo that somewhere, in some store in America, the Christmas decorations were up...half a month BEFORE LABOR DAY. (Geez...even when I’m ahead of myself I’m behind the trends!)

After thinking about it for a few minutes, I decided it must be that we’re all so depressed about the craziness of the world, we grasp at any and every reason to celebrate...anything. My problem with rushing the holidays is that (for me) it takes away the special-ness of the day. (Not to mention, some of us need all the time we can get to mentally prepare for these big events. Let us...or me... be blissfully ignorant for a few weeks, would you?)

Besides, there are alternatives. No need to start decorating for Halloween in August. Every day, some organization or company or group is celebrating some event/group/food/idea that is deserving of your attention.

Take today, for example, September 22nd. According to website checkiday.com, there are no less than a dozen causes to celebrate today.

For one, it’s the Fall (or Autumnal) Equinox. Yippee!!! In North America, as we officially see less and less sun each day for the next several months, the temperatures will drop. For some, it will bring moderate temperatures, relief from a scorching-hot summer. For those in the north and higher elevations, it means it won’t be long before we see snow and ice and....ugh. Enough about that.


There is also a day devoted to journaling, but apparently the exact holiday is copyrighted (really?) and I need the organization’s permission to even mention it. (I wish I had time to write and ask for their permission, but I don’t, so I’ll leave the actual name and its intended celebrations to your imagination. I’m disappointed...it would have been a good one for us writers to focus on.)

So...if you’re already tempted to whip out your plastic pumpkins or (please, nooooooo) your Christmas tree, consider instead baking an elephant-shaped birthday cake for Bilbo and Frodo. Make sure you use organically grown and harvested ingredients which you’ll purchase by riding your bicycle (or maybe a bus...or even taking a stroll) to and from the local woman-owned grocery store.  And don’t forget the ice cream and cones while you’re there.

During the birthday party, ask your favorite Centenarian to take a seat behind the piano to offer musical birthday wishes. (Everybody who’s a hundred years old knows how to play piano...right?) Maybe he or she can shift into some favorite Hippie peace tunes from the ‘60s. (Hey...I was around back then. I can poke fun!)

Leah writes stories of mystery and romance, good and evil and the power of love.

Please visit her at her website or Facebook (where she loves posting photos and videos of her son's kitten, Hercules). On Wednesdays you'll find her on Twitter  sharing lines from her current Work in Progress for #1LineWed.

Leah, I agree the early holiday decor is out of control. But I will definitely take a moment to appreciate elephants and rhinos today! Thanks for making me smile.

That post was great. My first smile this morning. Holiday decorations, etc. in stores so early make me cringe. Can't we just celebrate the "season" in a reasonable time frame. I think retailers are afraid another store will get the jump on them so they keep pushing the date earlier and earlier.

Great post, Leah. Think of people 100 years from now, with 100 celebrations to chose from per day. No suspense; nothing special with so much specialness. And this isn't something you can make a law about, either. Like making highways in memory of someone. Soon there will be a 'in memory' sign every mile. We don't tend to think ahead about the plethora problem...and there's no going back.

I meant to comment earlier and then our internet went out and has been wonky ever since. I loved this. I could hear you reading this to me, your voice was so strong. Great post!

Enjoyed the topic and, like Vonnie, loved your voice. Very entertaining. Though so true. Think of the Valentines being stocked in stores the day after New Year's. Life moves fast enough, why rush it?

It's true....we celebrate too much, too often and too soon. IMHO, the real meaning behind even the most sacred holidays have been lost.

I agree with you and Pamela - we pull out the decorations way too soon and lose something special in the process. It's hard to sustain holiday excitement when you're celebrating one day for two months. But that's just me - I like the idea of waiting to drink eggnog and put up the Christmas tree until December - not Thanksgiving weekend! Old fuddy duddy -

Thanks, everyone, for stopping by and helping me poke a little fun at the craze for celebrating...everything! I'm glad I'm not alone in my desire to just take a breath.

Jannine - I'd love to know how you celebrated rhinos today. I couldn't come up with a thing. :-)

Ashantay -- If you're fuddy-duddy, I'm in good company!

Ha, SO true!! I do not like seeing decorations nearly three months before the holiday, but then again, as fast as time is zipping by, that three months is gone in, like, a couple of weeks. I do not have time to celebrate all the holidays you listed, but wow, there is a lot to celebrate, isn't there? :) Thanks for the entertaining post!

Living in the South and what with all the climate change--I can't get in the mood for anything requiring brisk, cool weather. This includes Halloween, Thanksgiving and (sigh) even Christmas. Water skiing in a Halloween pumpkin costume just doesn't cut it. GAAAH! Thanks for a post reminding me that time marches on...with or without me!

Who knew I was missing out on so many celebrations? Thanks for the enlightenment!

Vonnie and Margo - Thanks for your kind words about "voice." The funny thing is that in person I'm really quiet and rarely speak up, at least in a group setting. Put my fingers on the keyboard, though, and I can't shut up. :-)

Pam -- don't get me started on my annual rant about THE HOLIDAYS. Argh.

Alicia -- You're so right. And I think part of the problem (for me) is that all the merchandisers have everything out so early, I get a false sense that there's plenty of time, because they're so early. You can't win!

Susan -- I'm with you on the heat. In southeastern Virginia, we probably won't even turn off the A/C for another couple weeks. And this year has been especially hot and MUGGY. (I feel like I'm back in Jersey!) :-)

LOL! That was so true and so funny, too. I love Halloween, so I just focus on the scary stuff, which I wish was around all year!

I love Halloween, too, Elizabeth...but early August when it's so blasted hot out is too, too early for me! Thanks so much for stopping by!

I celebrate coffee and chocolate every day. I need no other holidays. :)