I'm thrilled to reveal the cover for the second book in my Phoenix, Ltd. female bodyguard series. For a number of reasons, this book has been several years in the making, but it's almost here. <Queue the trumpets> Boiling Point will release October 6th, (which is also my birthday!) 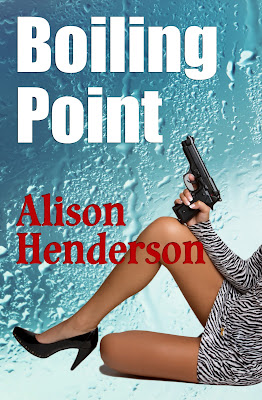 Zoe Hargrove’s first solo assignment as a bodyguard is off to a rocky start. On the way to her client’s lakeside estate, a pair of kamikaze bikers nearly runs her off the road. Upon arrival, she learns she’s expected to work undercover as a personal chef—a potential disaster since she can barely burn water—while secretly protecting the client’s pregnant wife from a potential assailant. To top things off, her culinary assistant will be the client’s latest invention—a robotic sous chef named GRAMPA.

And if that isn’t enough, the couple’s dangerously handsome chauffeur, who looks more like a prize fighter than a car jockey, constantly glowers at her as if she’s about to steal the silver. Zoe soon suspects he’s hiding secrets of his own, but can she uncover them in time to stop the escaped criminal who threatens them all? 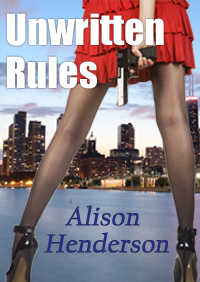 While this isn't a classic "romance novel" cover, I love it. It's colorful, eye-catching, and captures the cheeky fun of the story. I also wanted to use variations of the same elements as the cover of Unwritten Rules--the font, the color scheme, the legs, and the gun--to help visually connect the two books as part of a series.

I have a lot of work to do in the next month to get ready for the launch, but I'm excited to bring this story to my readers. Wish me luck!

Love the cover, Alison! It definitely complements the cover of the first book. And it sounds like a winner story-wise, too! Wishing you much success!

Yay, Alison. Great cover...definitely cheeky and nicely paired with Unwritten Rule's cover. The blurb is wonderful...we're ready for a fun romp with people who aren't what they seem. Happy sales to you!

The cover is terrific! So was the book. I think your covers accurately reflect your content since they're heavier on the suspense and lighter on the romance. I think they'll appeal to both women and men, which could potentially increase your reader base. Always a good thing!

Love the cover and the blurb. Sounds like my kind of read. Good luck with your release. Wishing you great sales and positive reviews. And you're so right, the covers DO compliment each other.

Thanks so much, Leah. Each new book is another gamble.

Rolynn, the story is definitely a fun romp.

Jannine, the cover doesn't look like anything else on Amazon, so I don't know if that's good or bad. It's almost retro in it's simplicity. However, it is eye-catching in thumbnail form, and I guess that's the name of the game. The images of legs do seem to draw male readers - LOL - and many did like Unwritten Rules, so you never know! I'll send you a copy when I get the print books, and you can check out all the changes I made.

Thanks so much, Vonnie. This is definitely another fun one--lots of action, suspense, and humor.

Best of luck and ahead of time happy birthday, Alison. I agree, the cover and blurb make me want to read the book. (Lucky Jannine! ;-) Cheeky! I like that!

Thanks, Margo, but I'm not sure Jannine was so lucky. She had to read the raw, original version. It's much better now that I've incorporated her suggestions.

Thanks, Andi. I hope readers will agree!

Fabulous cover...and the blurb makes me want to read the story. Great job, and congrats on your upcoming release/birthday!

The cover is perfect for your story. I love what I've read of it (pre-edits). Congrats on having a pub date. A double birthday!

Thanks, Alicia. I'm glad you like it. It's different but makes a strong visual statement.

Thanks so much, Diane. I've made a couple of significant changes since you read the first half - I hope for the better. I definitely plan to have a double celebration on the 6th!

Love the cover and the blurb caught me. Adding this to my to read pile.