Omigosh, I almost forgot it was my turn to post here. Let’s blame it on my new book that will be released tomorrow. Better than blaming old age.

Lately, we’ve been sharing our writing processes. I find it fascinating to read how other writers develop their stories. The process is as varied as the writers themselves. Some of us (plotters) plot first: detailed outline, character analyses, setting details, pictures. Some of us (pantsers) write “on the fly” or by the seat of our pants We have an idea (first line, maybe), sit down at the computer, and start writing. Let things fall where they may.

My process is some of each. I start out like the pantser with the idea. But it’s not long before I have to know where the story is going. Plot is not a 4-letter word. I also need to keep track of things. Important things like the characters’ names (changing the name and/or spelling of same) can really disconcert readers; details about the characters like hair and eye color, career, etc. If I need to research a concept, I do it when I need to. I don’t always print out the info, but I will write down the link to the article(s). Setting or world building? As I write (the story), I’ll make notes on the town/house/indoors/outdoors/time of year/weather. Where do all these notes go? Not on little slips of paper. I’d lose them in the mess that I call my desk. I keep a separate digital file labeled “notes” or “details.” (I’m not real creative with file labels.)

For my newest book, a science fiction romance novella MISSION TO NEW EARTH to be released tomorrow, I did more research than normal. The Mars One Mission has fascinated me since I first heard about it. By chance, I noticed the Science Channel was running a series called “Mars Rising.” I recorded those programs to watch more than once and replay facts I missed. The movie Avatar gave me the idea of my characters traveling to their new planet in cryosleep. And, of course, I needed info on cryosleep. Again, I jotted down notes (in my computer file) along with the link to the articles.

Meanwhile, I needed to actually write the story. But wait. Who were these people? Why would they leave everything behind to go to a new planet? Many times, I had to stop writing the story and figure out things. Is it any wonder that my actual story writing was slower than normal?

A plotter would have worked out all of this first. The writing would have gone much smoother if I had. But that’s the way I work best. And that’s what I tell new writers: try different ways and see what works best for you. Don’t be afraid to change.

MISSION TO NEW EARTH will be released tomorrow, August 31st. Currently it’s on pre-order for 99 cents at Amazon. 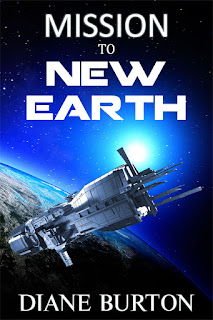 Would you go on a one-way trip to explore a new planet? Would you do it to save humankind?

Earth’s overpopulation and dwindling resources force the United Earth Space Agency to expedite exploration of new planets for a possible new home. When new crises ensue—a giant tsunami and the threat of nuclear winter—the timeline changes. Eight years of training crammed into four. Sara Grenard and her team prepare for launch, but are they ready for the one-way trip? Will the Goldilocks planet prove just right for Earth’s inhabitants? Before time runs out.

I strolled up to the man I loved and put my arms around his waist. When I rested my head on his chest, I heard the thud of his heart. Normally, a reassuring sound that always made me go weak in the knees, it beat more rapidly than usual. He was still agitated.
“Hey, guy. Everything will be all right. We’re ready. More than ready.”
“I know. It’s just—”
Leaning back in his arms, I reached up and patted his cheek. “Settle down, big boy. I think Bill and Ana have the right idea. From Gloria’s blush, she and Tom do, too.” I gave him a long kiss. At first, he didn’t respond—still worked up over the latest simulation. Then he gave in, as I knew he would. Not to be smug, but Marsh did like my kisses.
His kiss turned hard, demanding, as he strained to maintain control. I wanted him that much, too. But not on the tile floor in the lav. The shower had possibilities. When he eyed the enclosure, I knew he was thinking the same thing. Too bad I had other obligations. That was me, duty first. I could be such a stick-in-the-mud.

Diane Burton writes science fiction romance, romantic suspense, and mysteries. She blogs here on the 30th, on Paranormal Romantics on the 13th, and on her own blog on Mondays.

Yes, so true. There are many different processes. Each writer needs to do what works for them. I MUST have an outline (actually, a scene list), before I even begin a story. I am definitely not a pantser. Happy almost release day...love this story!

Fabulous excerpt, as usual. Best of luck with your latest! After so many years writing well prepared PR material, I'm a bonafide pantser, and happy to be one!

I'm a note-taking panster, kind of like you, Diane. As I create characters, I jot down notes to keep details straight. I've also discovered writing a one or two line summary after I complete each chapter is a handy tool. I can go back to see if the sequence of events is still working for both the plot and romance. I just started this technique on my current WIP, and I like it! Best of luck with the new book!

I'm a note-taking panster, too! Who knew?! I've been keeping my research and note files in Scrivner. I probably only use about a third of its functionality, but I like that I have everything within sight, in a single view. (I'm an out-of-sight/out-of-mind person.) Wishing you much success with the new book, Diane!

Diane, my systems change with each book. I laugh at the idea of me telling any writer 'how it's done.' HILARIOUS concept. Hell, I forget what method I used in the last book before I'm deep into the next one. The only thing that makes me smile about all this is how itchy my comments make plotters feel. They are going ballistic at what I'm saying. I do love to create chaos :-)

Alicia, I'd never have guessed that about you. Hey, whatever works, right?

Thanks, Margo. So glad you found what works.

Jannine, I do that, too--a sentence about each chapter. Sequence is so important.

Leah, Scrivener is such a powerful program. I'm just so comfortable with Word that I have difficulty changing over.

Rolynn, you are a hoot! Those die-hard plotter do get itchy, don't they?