Last weekend I spent a couple of days with my cousin Aleta and her friend Duane. Like me, Aleta is an ex-patriot Californian. She grew up in the high desert near Victorville; I grew up in the Los Angeles area. She's younger than I am, so I remember things she doesn't from when she was a child and before she was born.

We had a terrific time reminiscing about what it was like to be free-range kids in the desert. By age four, we'd both learned to avoid scorpions and tarantulas. We knew cholla or jumping cactus could bite you badly. We knew not to go barefoot where bull weed grew because the thorns were dreadful. We learned to play outdoors, to ride our bikes in sand without helmets and to be back indoors when the heat of the day reached 95 degrees.

Aleta left about 25 years ago to move to Anchorage. That was abrupt, from the high desert to Alaska. She loved it. A few years later, she moved to Burlington, VT to be closer to her boyfriend's family. Grandkids are so important.

I left first in 1969 to go to grad school in Tokyo for two years and returned to finish my degrees in Southern California. I had no intention of leaving until I met my future husband in a bar in Tokyo. We were both there on business, the only two non-Japanese in the bar. He's the only man I met in a bar and kept. That's a story for a different post. 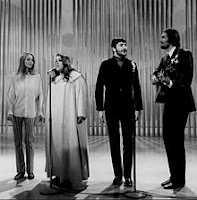 The more we talked, the more we realized how much we missed the California of our youth. Not the California of today, but the one that has become bigger than life in our memories. I took her to the beach for the first time and tried to throw her into the surf. It never dawned on me that this desert girl might be afraid of the ocean. I'd grown up in it, so I had a healthy respect for its power but no fear. She freaked out. We backed away, pulled our blankets way up on the sand and watched the waves from a safe difference. To this day, she remembers how I tried to drown her. NOT. SO.

I took her to see the Beatles. I don't know what was more exciting, the group itself or the silly girls screaming and tearing their hair out. It was her first visit to the Hollywood Bowl.

We had a host of dogs when we were little. She had a little brown brindle mutt named Chipper. She hadn't been born when her brother had a German shepherd named Duke. Great dog for a boy and a desert. I had a red mutt named Rusty. So I wasn't as creative in naming pets back in those days. Heck, I was only nine when we got Rusty. We had more dogs over the years, but both are pup-less now. I don't think either of us will get another dog. The last ones we each had were so special that no other dog can replace their memories.

Our lives took us all over the world. Odd that we ended up so close to each other. We meet twice a year in August for the races in Saratoga and in December for a friends and family 'Tween the Holidays party in Hyde Park, NY. One of these days I'll get her and Duane down to the lake. I won't threaten to throw her in this time. She's a sailor and has lost her fear of large bodies of water.

When we are California Dreamin' it's because we have great memories of where we grew up. I've put several into short stories. One of these days, maybe I'll share "Toad" with you all.

Where did you grow up? Do you have fond memories or could you barely wait to escape?

Betsy Ashton is the author of Mad Max, Unintended Consequences, and Uncharted Territory, A Mad Max Mystery, now available at Amazon and Barnes and Noble. I'm really excited that the trade paper edition of Uncharted Territory was released this week. Please follow me on my website, on Twitter, Facebook and Goodreads.

Great memories, Betsy. It's so nice that you and your cousin are still close and get to see each other. I have special memories of beach days in Central Jersey, neighborhood kids hanging out pack-like all summer, nights spent in make-shift tents (sheets over the clothes line) in back yards, playing cards and board games on rainy days. As we grew older, the neighborhood pack disbanded, and I wouldn't know them today if I had to pick them in a lineup! I made more special memories with new friends, though, and am blessed to count them among my friends today. Thanks for the bit of nostalgia this morning. :-)

I grew up in Gasquet, a super small town (400 people) in Northern California. Two room school house for grades K though 8. Our bikes (no helmets) were our transportation. We spent our summers at the river unsupervised, and our parents never thought twice about us being snatched off the street. A great place to be a kid. Great memories, Betsy.

My life began in Detroit, then we moved to a small college town in Mid-Michigan. Now I'm out in the country and loving. I, too, have a special cousin I see often. We spent many, many Summer's together at the family cabin on a lake up north. We never worried about being snatched either as kids. Even in the big, and supposedly bad-but it's not-city. I agree, great memories.

I'm the odd one...Army brat. I grew up in Ft. Meade, MD; Bamburg, Germany; Oshkosh,WI; Sendai, Japan; Ft. Benning, GA; Seoul, Korea; Faribault, MN. We kids (five) went anywhere we wanted on post, but any bad behavior went on my father's record...so we were very, very good ;-) From my odd childhood memory: We were packed and ready to be evacuated by helicopter off the post in Seoul, Korea, because of the turmoil of the Sygman Rhee revolution. One soldier died from an errant bullet spray, but we didn't have to evacuate.

All great memories, but wow, Rolynn, I think you are the odd one with an education of the world most of us didn't get. I grew up in Phoenix and didn't see any of the world until I married. Back then, Phoenix was a city with a town mentality. We were safe and roamed the neighborhood all day and into the evening. I remember the first freeway and how it was fought by many. Now? I avoid Phoenix and would never live there. Sorry if any Phoenicians read this and feel differently.

Lovely memories, Betsy. I grew up in a very rural area that is now a Detroit suburb. My school had K-8 in one room. Only 3 kids in my 2nd great. They were cousins. Summers meant never-ending work in the garden. Couldn't wait to grow up and leave. But I do remember Mom throwing a sheet over a card table so my sister and I had a place to "hide" out. Hot days reading in the shade of the house when chores were done. Eating corn, tomatoes, and green beans freshly picked from our garden. My childhood wasn't all bad.

Wow, what wonderful memories! I grew up in Oklahoma City, and I didn't live in exactly an ideal place, but the love of my parents and my closeness with my siblings made for some fabulous memories. Thank you for sharing!