Hi, it's Donna Michaels and I'm excited to have another cowboy release in my Harland County series, but this time he's a Sable Hunter Hell Yeah Kindle World crossover!

It was such an honor to be asked by Sable to participate in her Kindle World and to be one of the launch authors! Creating another branch of my McCall tree to mingle with her McCoys was the icing on the cake! Her Hell Yeah Cowboy hit #1 in Western Kindle last week and currently sits at #3, plus it's at #2 in Western Kindle Worlds. :-) Thank you all for making it a best seller! And big hugs to those who've left reviews! <3


Years ago, he unknowingly rescued his soulmate, now she’s back in Texas and about to save his guarded heart. 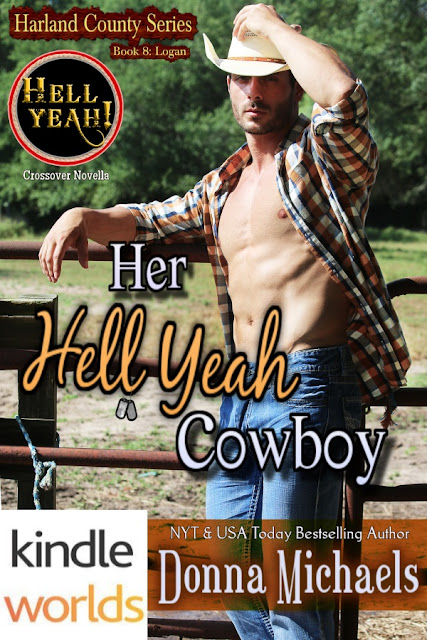 Cover photo by Cover Me Photography with Orestis Papapetrou

Unlike his twin, Texas National Guardsman Sgt. Logan McCall would rather march barefoot and blindfolded through a cow pasture than date the same woman twice. After an active duty injury during a flood washed away his promising sports career and engagement years ago, Logan guards his heart more than his life until, fresh from deployment, he runs into a friend of the McCoys…literally. Hill Country’s newest resident is hotter than the wing sauce soaking into his shirt.

Graphic designer and carrier of misfortune, Chloe Davis is a danger to herself and those around her, so entertaining thoughts for the sexy cowboy wearing her hot sauce should be a no-no…not a hell yeah—especially considering he’s the guardsman linked to a horrible instance in her past. But when he turns out to be one of her clients, she can no more avoid him than the attraction sizzling between them. Chloe’s back in Texas determined to make a fresh start, and she succeeds in business but fails to resist the handsome soldier’s relentless pursuit.

But when he discovers her past, will he trust his heart or lose her forever?

Excerpt
“I’d like to know what kind of read you were getting from my brother that was so interesting, Cady.”
Ah, hell.
Logan swallowed his drink along with a few curses. He’d rather not know.
Her calm, steady, perceptive gaze settled over him again. “Today’s the day.”
Super. Whatever. He wasn’t biting. Just raised his glass and enjoyed another mouthful of beer. The ale was ice cold with just the right amount of malted barley and hint of bitter. Damn, it was good to be back in the states.
“The day for what?” Lincoln frowned. “What’s going to happen to Logan today?”
“With any luck, I’ll finally make it to my ranch. That’s what.” It was all he wanted. All he’d wanted for fucking months now.
“He’s going to meet up with his soulmate again,” she replied as if he hadn’t spoken.
It took a full twenty seconds before any of that sunk into Logan’s head. The word soulmate bounced around a few times, barely leaving room for the again part. He had a soulmate? Well, shit. That wasn’t good. Not the reading he expected. Or wanted to hear.
Besides, if he had a soulmate, and they’d supposedly already met, wouldn’t he have remembered her?
It didn’t matter.
No way was he going to touch that topic, especially since his family had a history with soulmates. His cousin Cole McCall reunited with his soulmate Jordan after over a decade apart. The two had been through hell but were now married and living a happily-ever-after they deserved down by the gulf in Harland County. The couple had this crazy connection you didn’t need your eyes to see.
Weird shit.
Not something Logan wanted or ever pursued for himself since his failed engagement back when he gave a damn about relationships. Now he stuck with casual hookups. Nothing serious. It was cleaner. Easier. Safer. Believing in someone, trusting someone, only to have them crush you wasn’t worth the risk. He’d learned the hard way. Didn’t need to be beat over the head with it. Casual or not at all was his motto. The last thing he wanted was a soulmate.
The thing was, he believed in Cady and her abilities. So he did what any man in his position would do. He topped off his beer and enjoyed another healthy pull.
“Did you say soulmate?” Lincoln blinked at Cady, and when she nodded, his brother turned a shit-eating grin his way. “This I’ve got to see.”
Joseph smiled. “Me, too.”
Logan laughed. “Hate to disappoint you all, but look around.” He made a sweeping motion with his hand. “The place is practically empty, and the only woman here is Cady. Not a soulmate in sight.”
“She has big brown eyes that are going to melt that guarded heart of yours, Logan McCall,” Cady remarked leaning closer. “She’s near. Can’t you feel it?”
Feel it? What he was feeling was agitated. On edge. Restless. He had for some time now. But today he could add aggravated to that list. Cady’s dark, direct, Creole gaze, and the guys’ amused ones weren’t helping. Logan set his glass down and rose to his feet. “What I feel is the need to use the bathroom. Excuse me.”
The more distance he put between himself and the two chuckleheads at the table, the better he felt. And Logan was sure, once he was home, the weird restlessness—like he had unfinished business—would disappear. Hell, he just got off deployment. It was common to come back with baggage. This shit was normal. He’d deal with it.
What wasn’t normal was for him to run away. He didn’t really need to use the bathroom, but the urge to leave the table had been too strong to ignore. Cady knew. He could see it in her eyes and slight tug to her lips, but bless her, she didn’t call him out on it, just let him go without a word. Not only had his buddy married a smart, beautiful woman, she was sweet, too.
Going on the assumption the john was in the same place as before, Logan rounded the bar and—smacked into someone rushing down the corridor, all soft and curvy.
And hot?
He felt the heat right through his T-shirt. It scorched.
Inhaling on impact, he reached out to steady the distinctly feminine form, his mind registering a light, flowery scent, mixed with the mouthwatering aroma of…chicken wings?
“I’m so sorry. Are you okay? Did I burn you?” Her breathless voice had a sweet huskiness that spread awareness all the way down his spine.
What the hell?
He shook his head to clear it. “I’m fine,” he replied, staring at the mass of wavy brown hair obscuring the woman’s face as she tried to brush off the sauce that leaked onto him from the Styrofoam container she cradled in one hand.
“I’ve ruined your shirt.” She continued to try to clean him up but only made it worse. A second later, her palm stilled on his chest, and she drew her lower lip between her teeth.
“I’m fine,” he repeated, silently willing her to look at him.
With the initial shock of the collision wearing off, he realized the merit of the situation. Pressed against him was a soft, warm woman with an abundance of curves his body immediately wanted to get to know better. A little taller than average, she brushed his bottom lip with the top of her head, her riot of hair sticking to the chin he hadn’t shaved in two days. Logan wondered how their other body parts lined up, but most important, he wondered…what color eyes she had.

Wow, Donna. I learned a out Kindle Worlds at the RWA convention. Where have I been not to know all these goings on? I look forward to meeting you and sharing our panel together...and finding out more about your success in this Western Kindle World. Congrats!

Kindle Worlds? What's that? I have no clue here. But...girl, I have to say, LOVE the excerpt. Wonderful!!!

Have not heard of Kindle Worlds either, but best of luck with it, Donna. I agree with Jannine, that is one great title.

Great excerpt! I've heard of Kindle Worlds but don't really know what it is. :-) I'm sure this will be a big hit though!

I've got to read this. Good luck with the series.

Love the cover, love the title!

Donna, I hope you'll share more about Kindle Worlds with us. Your story sounds great. Love the title. Best wishes.

Wowza! Awesome cover. Love the excerpt! Congratulations. Aren't Kindle Worlds fun??? I plan to write one soon...one of these days...

Thanks so much, everyone!
Kindle Worlds is a new publishing platform from Amazon. Well, not extremely new. It's been around for over a year now. It's basically fan fiction for writing in another author's world. Bella Andre has one, Carly Phillips, Roxanne St. Claire, and so on. The author's negotiate a deal, I assume, to have a Kindle World of one of their settings/world in a popular series. Last year, I was asked by Cat Johnson to write in her Hot SEALs Kindle World. I had two releases in it. This year, I was asked by Sable Hunter to write in her very popular Hell Yeah cowboy world, and also by Paige Tyler, to write in her Dallas Fire and Rescue KW. I'm part of that launch in October during Fire Prevention week. They each asked me to 3 books, but I'm not sure I have the time. lol

Kindle Worlds also does fan fiction for TV shows. You do not have to be asked to be in a world, you can submit a story at any time for any of the worlds at Kindle Worlds. I just feel it has better momentum to release during a 'launch' when there are other authors so you can cross promote.

I hope I was clearer than mud. lol