Love, Liars, and Legends to Die For by Kim Kasch

You think you know someone then they rip your heart out…


It’s a tale as old as time, a story written through the ages. This is the history of love, liars and legends.


And it doesn’t take a legendary hero to experience love…or liars.


Everyone has experienced a terrible tragedy, been victim to a lie, and perhaps even had their heart broken.


It’s true. Even readers fall victim to a beautifully woven plot, where they get swept off their feet, while they turn the pages. And, a good book shows you just how easy it is to get caught up in a story and be tricked into believing the unbelievable. It’s even easy to become a party to a love affair, often at the hands of a skilled liar.


Throughout the pages of history people have been misguided by others. But deceit is eventually discovered, at least as we turn the pages on carefully crafted plots and search for the nuggets of truth hidden inside the stories.


For example, the most famous of lovers are often known for their trickery and deceptions, such as Cyrano de Bergerac. He romanced the woman he loved, the beautiful Roxane. But in truth he was lying to her all along and misleading her for the handsome but less skilled wordsmith than himself, Christian de Neuvillette. Christian wanted Roxane for a lover but he could not win her over with his own words, so he enlisted his friend Cyrano to win her hand. And Cyrano did as he was requested by deceiving the kind and naïve Roxane through trickery. In the end she was heartbroken when she learned the truth.


And then there is the story of Romeo and Juliet with her deceitful plot to trick everyone by her feigned death. But in the end, that too played out as a tragedy.


"For never was a story of more woe - than this of Juliet and her Romeo."


Legendary lovers might appear to live lives larger than most but they are also emboldened by the storyteller’s prowess with words. Many tales of heroic lovers are nothing more than big fish stories that appear much larger than they ever truly were.


When you spend a little time unlocking the history behind the lore, you might be disappointed, disillusioned and sometimes even disgusted, as you discover the truth. But it’s always worth the journey to find the truth behind the story because while you’re on the path through the pages, you will be sharing the Big Fish story and actually become a part of the tale. . .or maybe that should be “tail”.


Kim Kasch has a legendary love story coming out through Midnight Frost Books, in July. It is a Young Adult Romance based on the Danish legend of Morgaine Le Fey and the Viking.


She currently has a Young Adult Romance out through CleanReads, The Cats of Cullaby Creek. 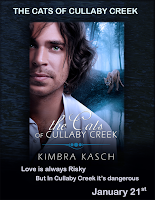 EXCERPT:
Kelly and Kyle
These two shared some sort of history. And now I was in the middle of their story.
Sparks flew through the air. But, they didn’t seem to notice—or maybe they just didn’t care how uncomfortable they were making the rest of us.
I scanned the room. The terribly odd thing was that while they stood in the center of the cafeteria—arguing—everyone’s eyes were on me.
What is so interesting about me?
After a few seconds, I heard whispered accusations slammed back and forth, like a ping-pong ball. My name, muttered in odd and angry tones. No one seemed to mind staring at me, but only the bravest few were sneaking sideways glances over at Kelly and Kyle, hoping no one noticed.
This wasn’t what I needed on my first day at a new school. I hadn’t come here looking for instant enemies, but I knew I’d accidentally stirred a private pot and things were already starting to boil.
I needed to do something and quick. From the sounds floating around me, if they got into an actual argument, I was going to get the blame.
I spit out the first words I could think to say, “What’s a new kid to do, after school, around here… for fun?”

BLURB:
When Savannah meets Kyle, its love at first sight. And why wouldn't it be? He's perfect, as far as she can tell. But Kyle appears whenever things go wrong. Maybe he isn't everything she thought he was. It's a complete mystery until she discovers the water in Cullaby Creek is being bottled and sold as vitamin “infused” water. Mistic Water promises the impossible. And then, like a magical elixir, it delivers. People who drink it feel younger, smarter, faster...healthier. But it doesn’t take long before side effects hit. Literally. The secret has to be in the water…or is it something more?

YOU CAN BUY KIM’S BOOKS HERE:

Email ThisBlogThis!Share to TwitterShare to FacebookShare to Pinterest
Labels: Kimbra kasch, the cats of cullaby creek, The Roses of Prose

Hi, Kim - Welcome! Love your examples of love gone wrong. Romeo and Juliet is one story that upsets me every time I think of it. Stupid, stupid, stupid kids!! When I saw the movie back in the '70s (I think?), I sobbed and sobbed, even knowing how it would end. I always have to remind myself they're FICTIONAL characters and to snap out of it!

Love your excerpt and cover for THE CATS OF CULLABY CREEK. If the guys in my high school had looked like that, I probably would have enjoyed it a whole lot more! :-) Nice. The new book, about Morgaine Le Fey and the Viking, sounds wonderful too!

Welcome to the Roses of Prose, Kim. Thanks for gracing our pages with your thoughts and examples of romances gone wrong via deceit. I wish you good luck with your writing career. You're a new writer to most of us, so this is awesome. We love meeting new talent.

So glad to have you on Roses of Prose today! Excellent post...I never really looked at it that way. Your book sounds awesome!

For sure, Shakespeare was the king of misguided love! Thanks for visiting us and best of luck with sales.

Welcome! I enjoyed that post and look forward to your book. On another note, I always thought Morgaine le Fey played a part in Arthurian legend; wasn't she supposedly King Arthur's sister or lover or something??

Welcome, Kim! If not for love gone wrong, where would us romance writers be? Very intriguing excerpt. Best of luck with all your upcoming books.

Loved your post, Thanks for sharing. I liked your excerpt, too. I'm putting it in my to buy list.