Not Your Mom's Middle Age by Brenda Whiteside

Two days ago was my 47th wedding anniversary. Yes, I know...amazing, but not the point. I actually know quite a few couples who have been able to stick together that long.

Middle age is what I'm thinking about. My husband and I spent the night in Jerome, Arizona. Jerome is an old mining town that hangs on the side of Mingus Mountain. It's long been a haven for artists of all art forms, mystical adventurers and bikers. We heard there was a band playing in the Spirit Room, and we spent the afternoon listening to good ol' waist-down rock and roll, danced a little, and people watched.

Early on I realized all but a few of the patrons drinking and dancing and acting crazy were around our age. I 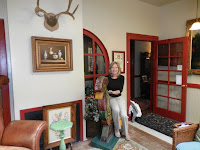 mused that the hippie-art crowd of the 70's had grown mature. No, maybe mature is the wrong word. They'd grown older. The general atmosphere and goings-on were anything but mature. We laughed a lot. This wasn't my mom's middle-aged group. I was embarrassed for some of them, but mostly I fit in so I cheered them on. What's really great about growing up is not caring what anyone else thinks when you're being yourself. Yea! 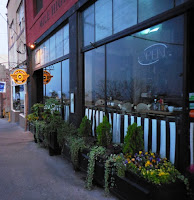 Jerome is a designated historic site. If you're Arizona bound, I'd highly recommend you visit this unique tourist town. But be prepared for one heck of a drive up the mountain on a road with so many switchbacks you might get dizzy.

P.S. I'll be at the hospital all day when this posts. My sister's husband is having a heart procedure and I'll be there for support. I'll check in as soon as I can.


Brenda spends most of her time writing stories of discovery and love entangled with suspense. The rest of her time is spent tending vegetables on the small family farm she shares with her husband, son, daughter-in-law and granddaughter. Together, they’ve embraced an age-old lifestyle that has been mostly lost in the United States - multiple generations living under one roof, who share the workload, follow their individual dreams and reap the benefits of combined talents.


Although she didn’t start out to write romantic suspense, she’s found all good stories involve complicated human relationships. She’s also found no matter a person’s age, a new discovery is right around every corner. Whether humorous or serious, straight contemporary or suspense, all her books revolve around those two facts.

Email ThisBlogThis!Share to TwitterShare to FacebookShare to Pinterest
Labels: brenda whiteside, Love and Murder, The Roses of Prose

Sounds like you had a great anniversary in a really fun place. Keeping positive thoughts for you and your family today.

We hit the 47 anniversary mark this year too. It can be done. Great message - be yourself. Glad you had a good time. I'm also keeping positive thoughts for you and your family today. Take care.

Unfortunately, my hubby and I will never go there, unless we hire a driver. Hubby is afraid of heights and when we drove Highway 1 in CA to Mendocino last autumn, I thought I was going to have sedate him! Never again mountains with my hubby. LOL Too bad, too, sounds like a way cool place!

We're hitting 44 years of marriage this year. Astounding! I've been to Jerome...enjoyed it very much. Glad you had a good time on your adventure together.

We're hitting 44 years of marriage this year. Astounding! I've been to Jerome...enjoyed it very much. Glad you had a good time on your adventure together.

Happy Anniversary, Brenda. Jerome sounds like a fun place to visit. And healing thoughts for your sister's husband.

Sounds like a great place! Like Hebby, I'll probably never get there ... unless Star Trek technology is born and I'm transported in a few seconds. :-) Happy anniversary!

Thank you all. And by the way, my brother-in-law came through with flying colors. Hopefully now, his heart will behave.

There are two ways to go into Jerome, Hebby and Leah. One way is not so scenic and only a few treacherous turns...but not nearly as fun. Of course if you don't like great overlooks from every street in town, you might still be bothered. LOL

So glad to hear your brother in law survived his surgery and, yes, let's hope his heart behaves. I do ok on twisty, turny roads if I'm driving, but not if I'm a passenger. I guess it's a control issue. Great post.

I enjoyed your post and Jerome! Happy Anniversary and Get Well Soon Wishes to your b-i-l!

Thank you so much, Ashantay.

Thank you so much, Ashantay.