3 x 3, A Different Way To Look At Books by Betsy Ashton

I went to a fantastic week-long writers' workshop last week at Hollins University in Roanoke, VA. Only 50 minutes from where I live, I chose not to drive back and forth daily but checked into a dorm. Yes, a college dorm. Rows of stall showers. Common rooms where we met nightly to do our homework and chatter. And drink, of course. 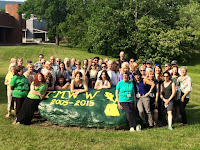 Tinker Mountain Writers' Workshop has helped me so much. I first went four years ago where I workshopped what eventually became Mad Max Unintended Consequences. Two years ago I workshopped a key scene in what became Uncharted Territory.

This time, I took my troubled serial killer novel. I was mired in how to start the damned thing, so I took one start for review. I was right. The opening stunk. General consensus. Was I pissed? No. Was I hurt? Maybe a little, but the six others in the workshop validated what I knew in my heart: I was starting in the wrong place and using a frame that was a cliche.

Out went the frame. No longer do I start with a letter to "someone." I start at the beginning and will let the story unfold in real time. No longer do I start at a point later in the narrative and then fall into a backstory. Yikes! What was I thinking? Or was I over thinking? Still not sure, but I do know the opening lines of "My sorority sisters and I tried sex, drugs and rock and roll, but they weren't enough for me. Then I killed someone and found my true calling." had to go. And out they went where they were. They may reappear at a later point.

One exercise we did was incredible. It's called 3 x 3, hence the title of this post. It's all about reducing your book to three words x three lines. Laura Benedict, our teacher of this writing genre workshop, used The Shining, by Stephen King as her illustration. 3 x 3 goes like this:

Had to admit, this was a tough exercise. Can you do this for your current WIP? Try it and let me know how it works.

Betsy Ashton is the author of Mad Max, Unintended Consequences, and Uncharted Territory, A Mad Max Mystery, which is now available in e-book at Amazon and Barnes and Noble.

Sounds like a great workshop, Betsy. Those lines are tough. I'll have to think on that one!

Thanks for the idea, Betsy. For my new book:
Embalmer lost a lover and a cadaver
Corpse-stealer kidnaps embalmer
Embalmer rescues cadaver and rekindles love

Sounds like a great workshop. As Margo will tell you, our RWA chapter started its first retreat at a university & we slept in dorm rooms. Cheap! Love the idea of 3x3. I'll have to think on that. BTW, I thought your opening sounded pretty good. I'd want to read more.