It's my turn at the Roses of Prose again, and I brought another story to share. This one is also based on a true incident. Isn't it great when life presents us with so many story ideas?


“Because you have enough toys at our house. These need to stay at Grandma’s.”


Vera watched the exchange between her daughter and granddaughter. If she had her way, Kayla would go home with whatever it was she wanted. Even Grampa, for a day or two, if that would make her happy. But, before she’d become a grandmother, with its license to spoil and let discipline slide, she’d been a parent. She remembered those demands and the limits they imposed. So she said nothing.


“They need to go home with me,” her granddaughter persisted. Vera could hear the tears of frustration in Kayla’s voice, then watched them brim over in her eyes.


“They’re all dirty. Look.” Her daughter reached out to gingerly touch a grimy sleeve, then brushed her hands swiftly together to cleanse them.


“But, I want them to.” Kayla stiffened her knees as if that physical act would help her get her way. “Why not?”


“Because I said so,” Vera heard her daughter counter at last. She recognized the line used by many parents to end an argument with a child.


The dolls in question had been a Christmas gift—from Vera’s mother to the twins—many  years before. Her youngest daughter had actually thrown them in the trash one day when she decided to purge her bedroom, and herself, of all things juvenile. Vera couldn’t stand the thought of their being discarded. She’d rescued them then set them in a corner of the basement to be forgotten. That was where Kayla had found them—toward the end of a sleepover visit when boredom had begun to set in and she’d gone off looking for new adventures.


Vera steeled herself. She would be expected to respond. It was now up to her to find a solution for her granddaughter while allowing her daughter to save face.


“Yes,” she said as if Kayla had just asked for something as easy to provide as a cookie.


“Is Momma right? Do the dolls have to stay here?”


Vera looked at her granddaughter’s expectant face, then at the ‘please help me here’ expression on her daughter’s. “Yes, they do, Sweetheart,” she said at last. “Because, your mother is right. The dolls are a little dirty.” She looked at her daughter. “And, Grandma needs to clean them up.”


She knew she was providing only a stop gap measure; a temporary fix to the situation. Still, she was relieved when Kayla accepted her answer without argument. For now, that was enough.


The next day, Vera inspected the dolls with a critical eye. She had forgotten how important dolls had been to her at one time long ago, then she realized, they still were. As a child she had spent many satisfying days with her inanimate friends. She’d dressed them warmly for walks outside and tended to their every imagined need.


She laid these dolls on the counter by the sink, then went to work with soap, water and a wash cloth. It was like bathing a baby without the squirming. After they were dry, she’d mend the minor rips and snags she’d discovered.


A few days later, she bent to that task. It was important that the thread blended with the material so the stitches didn’t show. She could almost see her own mother, expertly matching thread to cloth. Vera pulled a length of thread from a carefully selected spool. Her stitches were small and neat, just as her grandmother had taught her. ‘Keep the stitches even.’ Gram would say. ‘Not too long. The shorter the better. Long stitches are for basting. You, Vera girl, are sewing.’


She worked slowly and lovingly until the dolls were completely restored. Then, she decided new clothes were in order.


Her smile erupted into an outright laugh as she drove into the yard later the next afternoon. Her trip to town had been successful on many fronts. The hardware had the part Ben wanted for the tractor, in stock and on sale. But, best of all, the toy store had yielded more than she’d hoped. It had been a long time since she’d been doll clothes shopping. She’d forgotten how much fun it could be—going through all the colors, the styles, the accessories. She’d settled on a yellow dress for the girl doll, smocked across the front in orange and pink thread. The boy doll wound up with jeans—appropriate for a boy, she thought—and an orange top festively embroidered with a palm tree on the front. His outfit came complete with a hat. She quickly unloaded the car, anxious to get to her dolls. Dressing each one with love and care, she took her time to straighten their collars and adjust them both just so.


She set them on the bed in the spare room, then stood back to admire her work. She couldn’t wait for Kayla to see what she’d done.


She’d recaptured and made cherished memories. And, she’d done it for all of them—her grandmother, her mother, her daughter, her granddaughter, and herself. 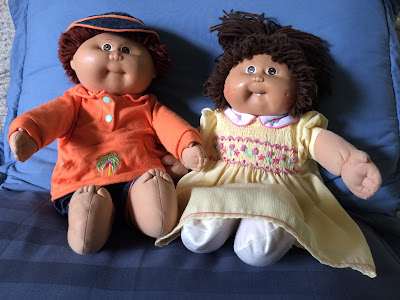 *****
Hope you enjoyed my latest offering. Happy Summer, Everyone.
My days to blog here at the 11th and 23rd. For more about me and to see some of the other stories I have, please visit my WEBSITE
Posted by Margo Hoornstra at 12:01 AM

You did it again, Margo--captured my heart with your story. My husband's grandmother made Raggedy Ann & Andy dolls. They stay here for the grandchildren to play with, but each of our children have their own. Love Vera's quick thinking and her support of her daughter. Great story.

Thanks, Diane. My heart to yours. 'Vera' thanks you for the quick thinking comment. She does know a thing or two, though her kids would never believe it. ;-)

Wonderful story, Margo, and one with which every grandmother can identify. I certainly do. I face the "why can't I take it home" syndrome when my grandchildren visit. The granddaughters want to take home my old costume jewelry and my lipstick that they wear when we play dress up. The grandsons want the trains and Matchbox cars my sons left behind. I'm pleased to say that most of all, they want to take home my collection of children's books that we read at bedtime when they stay overnight. I especially have a heck of a time hanging onto "Harold and the Purple Crayon."

I loved this story, Margo. My girls also have Raggedy Ann and Andy dolls my mom made them. Plus American Girl dolls along with a fortune in clothes. I won't let them get rid of them. Dolls are too "personal" to give away, though I'm far more sentimental about the dolls than my teenagers! I'll keep them until my daughters have girls of their own.

Sweet story, Margo. Love the 'putting things right' aspect of the story. I'm more likely to take a tarnished brass piece and shine the thing up back to its former glory. Very satisfying. As you said, yours was a temporary solution...did the dolls stay or go...eventually?

Thanks, Lana, and yes, the books are special. I actually have our smallest bedroom designated the 'toy room' in our house to hold all of the 'not yet forgotten' toys. Two shelves of books included. "Harold and the Purple Crayon" I'll have to add that to my TBR list.

Nice to hear you loved the story, Jannine. My girls, unfortunately, didn't inherit my love of dolls. Too 'personal' to give away is right. My mother actually bought these Cabbage Patch dolls for my twins the year before she died. No way are they going anywhere. The good news is, my granddaughter loves dolls as much as I do. The trait must skip a generation or something.

I loved your sweet story. A generational love story and we need more of those. Hugs.

Nope, Rolynn, the dolls remain here with me. Guess you and I share the putting things right mentality. Not all bad, right? I've always had a hard time throwing things away, dolls or otherwise. So much of our lives seem to be disposable these days. Thanks for stopping.

I love stories with grandmas in them. I always include "senior" characters in my novels--creates balance! Thanks for a memorable story!

What a touching and entertaining story! I don't have grandchildren, but I'm sure I'll feel the same. Thank you for sharing your wonderful talent for turning true events into fictional delights! :)

Hugs back at ya, Vonnie. Have to say I did enjoy writing that one.

Gotta have a grandma, Susan. My mother's mother was the best one yet. She lives in my heart to this day.

Wow, Alicia. I'm beaming! Thank you for the compliment. Glad you enjoyed my stuff. PS - I'm pretty sure you'll make one wonderful grandma when your 'time' comes.

Such a nice story! You returned me to my childhood days. I loved dolls and Barbies, and they did get a little worn with all of their "adventures."

My daughter, Maggie, used to carry around her Pooh-bear with her wherever she went. I was worried she'd lose it and be distraught so was pleased when I picked up a second Pooh-bear at a garage sale. She seemed to recognize a difference between them, even though it was the same toy. One Pooh had a slightly pointier nose and was cleaner. Still, she eventually accepted him. This didn't solve my problem though because she took to carrying around BOTH Pooh-bears!

It was nice to think back to those simpler days. Thank you for the nostalgia!

Terrific story, Margo! I love the way "Vera" so lovingly restored the dolls. I don't think I'd have that much patience. Good for "Vera"! My in-laws kept an old coffee can filled with those little plastic soldiers at their house (my hubby's when he was a kid), and my sons always dragged them out when we would visit. They looked forward to having those special toys at Nana's and Pop-pop's.

Thanks, Melissa. Glad you could identify with my characters, and, don't worry, you'll be a fine grandma when you get there. I promise.

MJ-Dolls were always my favorite toys. I hear you about the child carrying around the same animal AND having the intelligence to notice the difference when a second is brought in. (Love that part, actually!) The nice thing about these 'problems' our kids and grandkids have is they never last long. Thanks for stopping.

Leah. It is special for kids to experience the toys their parents had. Nice of your in-laws to take the time and trouble to preserve them. I remember playing with those little plastic horses and, sometimes the cowboys that came with them. We'd build barns and corrals. Stage races. Ah, yes, all this when I wasn't playing with my dolls, of course.